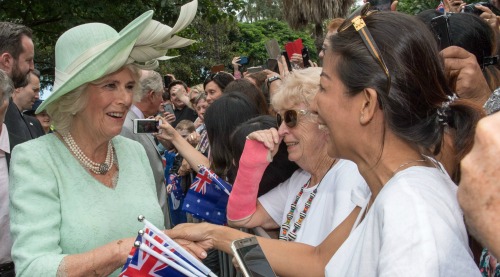 Prince Charles and Camilla Parker-Bowles were in Australia recently. While the rest of the world has been focused on coronavirus, the royal couple offered their support and gave devastated Australians a sense of hope. Despite suffering through a state of disaster, Charles and Camilla were able to bring smiles to their faces. They also ended up being inspired themselves.

Australia has been dealing with the catastrophic and devastating bushfires, which continue to wreak havoc on countless people. Despite being deeply impacted by grief and loss, Prince Charles was in awe of how it seemingly brought out the very best in them.

“At the very worst of times, we saw the very best of Australia.”

Prince Charles and Camilla Parker-Bowles traveled to the area to offer their help and support. In addition to benefit dinners, moving speeches and donations, the royal couple took the time to meet and talk to those that are living through the disaster.

At a benefit dinner hosted at the Mansion House in London, Prince Charles gave a moving speech. He explained to the attendees that even the most experienced firefighters were stunned by the ferocious flames. Aussies were robbed of their homes, lives and families.

No matter how bleak the situation seemed, Charles and Camilla were inspired by how the Aussies banded together. There were countless volunteers working around the clock. Emergency personnel and firefighters powered through to battle the blazes, risking their own lives to help others.

Prince Charles has always been passionate about environmental causes. So, it’s no surprise that when hearing of the Australian bushfires that he wanted to do his part to help. That is where the benefit dinners, donations and fundraising campaigns came in.

However, that isn’t all that Charles and Camilla did. They went straight to the source by traveling to Australia to be among those who are smack in the middle of the crisis.

On Twitter, Clarence House posted pictures of the Australian visit. In one of the photos, Camilla is with children wearing aprons. All of them are full of smiles as they conversate with the Duchess of Cornwall. It seems that it was a trip that none of them will forget.

“Amidst the horror and the sorrow, I have, above all, felt the greatest possible sense of admiration for the extraordinary determination and resilience of the Australian people.”

The fires began in September 2019, have caused 30 deaths and many millions of dollars in damages, as well as immeasurable destruction of land and wildlife. Be sure to catch up on everything happening with Prince Charles and Camilla Parker-Bowles right now. Come back to CDL often for royals news, and updates!