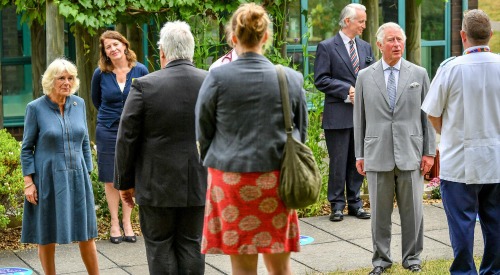 British royals news reveals that Prince Charles and Camilla Parker-Bowles have made their first in-person appearance since the coronavirus lockdown. The couple met with hospital workers and frontline staff at Gloucestershire Royal Hospital, and photos from their appearance show that they practiced appropriate social distancing requirements.

Charles and Camilla’s visit with the healthcare workers took place on the hospital property, with everyone standing outside and approximately six feet apart as they talked together about what the staff have experienced working during the coronavirus pandemic.

Those with whom Prince Charles and Camilla Parker-Bowles met included volunteers, clinical psychologists, doctors, social workers, biomedical scientists, and members of the domestic team. Charles and Camilla thanked the workers for all their efforts in keeping healthcare and emergency services open amidst the crisis.

Prince Charles greeted some of the workers with his hands clasped together in a “namaste” gesture rather than giving a handshake, which would have put everyone at risk and wouldn’t have met social distancing protocols.

After the visit, Prince Charles said: “It’s been a marvelous opportunity just to have a chance of seeing people I know have been doing so much – literally on the front line. And having to endure an awful lot of stress and strain in their wonderful way – how they do it I don’t know. But delivering everything in the most effective way.”

Of course, Prince Charles is a COVID-19 survivor himself, having been diagnosed with the virus back in March. Given his age and the fact that he is in a high-risk group, Charles fared quite well, and he has said that he had only mild symptoms. Still, Charles did report that he lost his sense of taste and smell when he contracted the virus.

It was great to see Prince Charles and Camilla Parker-Bowles out and about and honoring frontline workers. As Camilla stated after the event, “They’ve all done the most remarkable things. They are Britain at its best.” Be sure to check back here at CDL for more British royals news and updates. We’ve got you covered!