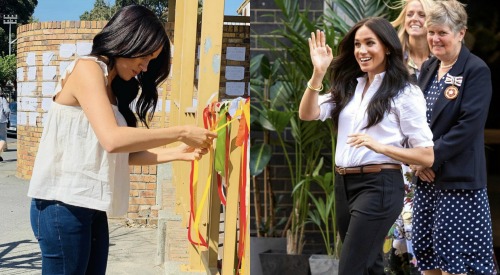 One of Princess Diana’s astrologers has made some big predictions for Prince Harry and Meghan Markle for the remainder of 2020. As many royal watchers know, astrologers Penny Thornton and Debbie Frank each advised Princess Diana through the years, and Debbie Frank has gone on to make several predictions about the royal family that have come to fruition.

For example, Frank reportedly predicted Prince Harry and Meghan Markle’s exit from the royal family back in January, and now she’s got some predictions about the couple for the remainder of 2020.

Frank feels that Harry and Meghan have some professional challenges in their future, more publicity, and possibly even a baby on the way by the end of the year.

Writing for Hello! Magazine, Frank’s analysis said that this year, Meghan needs to make herself heard, and that the couple are set to collide with the “powers that be” in the establishment.

Some have said that this could have foreshadowed Harry and Meghan’s recent trouble with the press, as they’ve been having intrusive experiences with the Los Angeles paparazzi.

Frank writes: “However, there are definitely some bright lights overhead for the Duchess of Sussex in late Spring and into early Summer when generous, expansive Jupiter will put her marriage onto a happier footing as she and Harry go global and they magic up the success that creates a strong pathway for their future.”

The astrologer also foreshadows some 2020 setbacks and delays “which require Meghan to process and wait rather than forge ahead with her goals. Then it’s onto the next eclipse on July 5 in Capricorn which again ripples across all the royal family and brings the January royal family issues up to the surface again.”

Finally, Frank says: “The rest of 2020 is packed with significant pointers that challenge Meghan to stay on track with her visions and dreams, and could present exciting additions to the marriage.

She’s certainly highly visible and in December there’s a real sense of cutting with the past, perhaps another baby on the way and relief from having navigated a huge transformational period.”

Frank also noted that the royals are “always hugely impacted by eclipses” and that major events, such as Princess Diana and Prince Charles’ marriage, the births of Prince William and Kate Middleton, and Princess Diana’s death each occurred “very close to eclipses which since ancient times have always reflected epic events.”

Of course, another royal baby would be something that many followers of Prince Harry and Meghan Markle would absolutely love at this point. We’ll see soon enough whether Frank’s predictions for the couple come to fruition.

There’s half a year left to go, and many exciting possibilities for the pair! Be sure to check back here at CDL for more British royals news and updates.