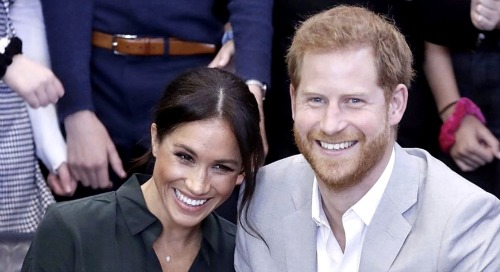 British royals news reveals that Prince Harry and Meghan Markle are being referred to as the “big losers” in the Royal Family, at least by one renowned author. At the present time, Harry and Meghan have stepped back from their royal duties and are living in lockdown in Los Angeles, in a mansion owned by Tyler Perry. And while the couple appears to be doing what they can to help others during this pandemic, their visibility in the UK is markedly reduced

Well, now author Phil Dampier is suggesting that Prince Harry and Meghan Markle may have exited the UK and their royal duties at precisely the wrong time.

Dampier has told Express.co.uk that Harry and Meghan have missed seeing their public images amplified, as has been the case with other members of the Royal Family during the coronavirus crisis.

Dampier said that he thinks that the lockdown has been good for the Royals’ images, with the exception of Prince Harry and Meghan Markle. “They are the big losers in this because they now look somewhat isolated and somewhat irrelevant in this country,” Dampier said. “They still might have a massive role to play internationally or in America, but I think people just shrug their shoulders in the UK.”

Dampier continued, saying that he thinks that Prince Harry and Meghan Markle don’t appear to be interested in the plight of the country, while the other Royal Family members have increased in terms of popularity and, according to Dampier, have fulfilled their roles quite well.

That’s an interesting sentiment, especially since most of the Royal Family (aside from Harry and Meghan) have been in lockdown in the UK and not making in-person public experiences.

But we have to remember that members of the Royal family have been busy making virtual appearances via video calls to various charities and groups, and their presence has been felt by citizens.

By contract, Prince Harry and Meghan Markle have remained very quiet during their lockdown in Los Angeles. Harry and Meghan don’t yet have a developed internet or social media presence under their new Archewell branding, and they have yet to do official charity work under the foundation.

And now there are reports that the launch of Archewell has been pushed to 2021.

Of course, there have been some sightings of Harry and Meghan, as they’ve gone door to door to deliver essentials to vulnerable populations in Los Angeles. And Prince Harry was recently seen in a video message regarding the postponed Invictus Games, while Meghan Markle addressed her former high school’s graduating class by video.

But in terms of doing things for the UK, Harry and Meghan obviously haven’t been carrying out activities there. And that seems to be at the heart of what Dampier is getting at. The boost that other members of the Royal Family have received during the lockdown has just been lost on Harry and Meghan.

Perhaps the situation would be different if the coronavirus pandemic hadn’t taken hold – after all, we’d probably have seen Archewell up and running by now, along with an attached Instagram account featuring what Harry and Meghan are doing to help others. But that was beyond anyone’s control, and it is simply how things worked out.

At any rate, it will be interesting to see how Prince Harry and Meghan Markle’s popularity and public perception in the UK is affected when Archewell is up and running full force. But for now, it seems that the other members of the Royal Family will enjoy their boost.

Stick with CDL for all your British royals updates – we’ve got you covered with all the latest news!