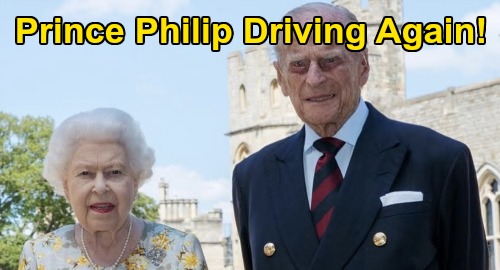 British royals news reveals that Prince Philip has taken up driving one again, nearly two years after he had to relinquish his driver’s license. Prince Philip is now 99 years old, but he apparently still loves to drive. And while he’s not allowed to drive on public roads, he can still get behind the wheel on the grounds of Windsor Castle.

According to sources, Prince Philip has been driving around the estate on the Queen Mother’s old golf buggy. This doesn’t violate any laws or regulations, as Philip is still allowed to drive on private roads. And since this is a golf buggy and not a traditional vehicle that can go particularly fast, it doesn’t seem to be a big deal.

Plus, the buggy serves as a means to help Prince Philip get around the estate, as he’d likely not be able to roam the grounds by foot at his age. Journalist Kate Thorton recently told True Royalty TV that the rumor is that Philip “dug out of one of the royal museums the Queen Mother’s golf buggy.”

It’s also said that Prince Philip used to love to buzz around on an easy rider motorbike around the estate, but that was apparently before his car crash back in January 2019. Royal watchers will remember that Prince Philip caused a very serious crash near Queen Elizabeth’s Sandringham estate in which two women were injured.

It’s a pretty scary story – Prince Philip’s Land Rover overturned after it collided with a Kia that was carrying two women and a 9-month-old baby. Fortunately, the women only suffered minor injuries and the baby was not hurt. Philip was ok after the accident as well, but the incident caused him to voluntarily relinquish his driver’s license.

The accident was considered to be a “critical incident” and the police investigated as they would have any other accident, and around that time pictures surfaced of Prince Philip driven without a seat belt. Buckingham Palace released a statement saying: “After careful consideration, the Duke of Edinburgh has taken the decision to voluntarily surrender his driving license.”

Prince Philip ended up taking full responsibility for the accident, and he wrote letters of apology to the women involved. It was certainly a scary event, and we should note that it’s not the case that Philip is back in his Land Rover out on public roads – it seems that he’s simply using a golf cart to get around the grounds of Windsor Castle, which is a very different thing.

Also, after the accident, Buckingham Palace did put out a statement saying that if indeed Prince Philip were to drive on the royal estate, then it would be “in accordance with all relevant regulations.” That seems to be what’s happening now, with Philip using the golf cart as a means of getting around at home. Keep checking CDL for all your British royals news. We’ve got all the latest updates right here.