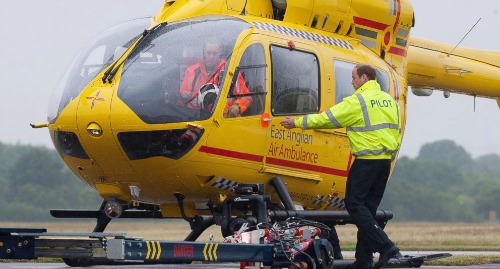 British royals news reveals that Prince William was one “desperate” for a career in the military, but it was simply not meant to be. And as it turned out, a very important person stood in the way of Prince Williams’s military career dreams – Queen Elizabeth. The Queen said a resounding NO to William remaining in the military or seeing frontline service.

Royal commentator Simon Vigar recently spoke as part of a documentary called “William and Kate: Too Good To Be True,” and he said that Prince William “wasn’t allowed anywhere near the frontline” because the “ultimate boss” said no.

As royal watchers know, Prince William served the British military, and while there he trained to be a helicopter pilot. William reportedly loved his service, but because he was second in line to the throne, he simply wasn’t allowed to be on the frontline. After all, Queen Elizabeth needs to protect the monarchy!

Instead, Vigar said that William ended up retraining as a search-and-rescue pilot, and in that way, he was able to help others without putting himself at undue risk.

Prince William was stationed at a search-and-rescue base on the Welsh island of Anglesey starting in 2010, and he lived there with Kate Middleton in the early years of their marriage.

It seems that those early years of married life might have been the time when William was doing what he truly loved, knowing that he’d soon have to turn to a life of royal duty.

Recently, The Sun reported that Prince William was considering returning to helicopter flying to do his part in the nation’s fight against the coronavirus. As a source said, William wanted to help, “but it’s complicated as he was originally grounded from the job so that he could become a senior working royal.”

But both Prince William and Kate Middleton have been doing their part to help the UK start to come back from the coronavirus lockdown – albeit not with William as a helicopter pilot.

William recently visited an ambulance/first responders station and a local bakery on his first public visits since the lockdown, and Kate Middleton has made her first post-lockdown appearance as well.

While William may always long to be a pilot, that doesn’t seem to be in the cards, yet he surely still remembers his piloting experiences fondly. Keep checking back with us here at CDL for all your latest British royals news and updates.