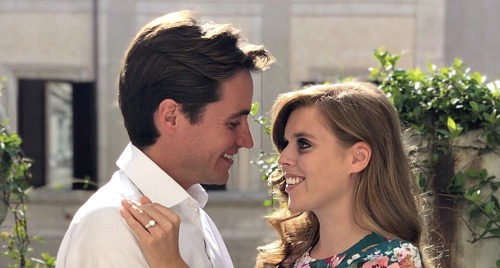 Princess Beatrice’s wedding has officially been canceled, but it’s not because of a lack of love. It was speculated that the royal couple would have to postpone their ceremony yet again. This will make the third time that it had to be rescheduled. While some wonder if the union is cursed, an insider claims that the couple is considering a private ceremony.

Due to the coronavirus pandemic, Queen Elizabeth has canceled all garden parties at Buckingham Palace. This was the location of Princess Beatrice’s reception, with the actual ceremony at St. James’ Palace in London. Due to the garden party cancellations, this means the reception would have to be held elsewhere.

The reception location isn’t the only issue, though. The COVID-19 pandemic puts people at risk. Princess Beatrice, 31, and Edoardo Mapelli Mozzi, 37, were expecting 150 guests. Some of the invited are older and others could have compromised immune systems.

Due to these reasons, the wedding is canceled. When it had to be postponed before, they quickly set new dates. However, nobody knows when the coronavirus is going to be contained.

According to People magazine, Edoardo and Beatrice are considering a private ceremony. If they decide to go ahead and reschedule their wedding yet again, the earliest would be sometime next year. A palace spokesperson explained,

“Princess Beatrice and Mr. Mapelli Mozzi are very much looking forward to getting married but are equally aware of the need to avoid undertaking any unnecessary risks in the current circumstances.”

This will be the third time Princess Beatrice’s wedding has been postponed. Previously, her big day was rescheduled both times due to Prince Andrew’s scandal. An insider revealed that it forced the wedding date to be changed twice. It was also implied that was why the wedding was downsized. However, another source explained that having a low-key event was Beatrice’s preference.

The Duke of York’s Involvement in Daughter’s Wedding

Last year, it was reported that Andrew would likely be a big part of Beatrice’s wedding. However, there have been signs that his involvement is minimal. Sources claimed he wasn’t seen at Beatrice’s engagement party.

Even though she has publicly supported her father, she also has a responsibility to the Royal Family. Plus, the wedding should be about the bride. If Andrew has a major presence, then the disgraced duke and his royal scandal would be all people would talk about.

Don’t miss all our hot Princess Beatrice news here at CDL. We’ll pass along plenty of updates as other royals news rolls in.