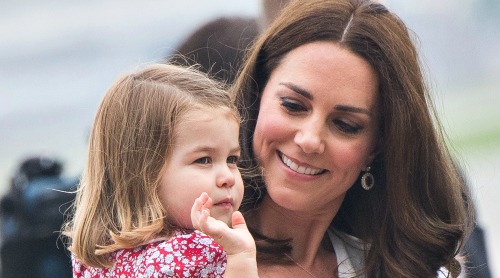 Instilling values in one’s children is an important task for any parent and Kate Middleton is no exception. News for Kate Middleton across social media is literally gushing now about how the Duchess of Cambridge is teaching four-year-old Princess Charlotte to be environmentally responsible.

Some might think that Kate Middleton lives an entitled, royal lifestyle with haughty glamour and high society fashions. However, those who make such assumptions would be wrong. Kate doesn’t seem to be the type of royal to leverage her status. Instead, garments like Kate Middleton’s dresses get recycled. Followers of Kate are likely pleased to realize that she’s a normal person like them. After all, the average woman doesn’t go out and buy new clothes every time there’s an event, party, or other gathering!

Now, Kate Middleton’s children are following her example. This couldn’t be more true than in how little Princess Charlotte is copying her mom. (How cute is that?) Just for example, Kate’s only daughter was seen recently wearing the same Amaia Kids green coat that she wore during a little family outing on Christmas Day to Sainsbury’s with her mom and siblings.

Kate Middleton has to be proud. Princess Charlotte isn’t the only one of Kate Middleton’s children who are taking after her. Both of Kate’s sons have also recycled their apparel. Indeed, Kate Middleton’s youngest son, Prince Louis was seen just last year wearing (ancient by now) hand-me-downs originally worn by both Prince Harry and Prince William as children!

Even more telling, royal watcher Kate Carter actually saw Kate Middleton and her children at a local store. While there, she gushed that although Princess Charlotte was wearing her recycled coat, she still seemed interested in the dresses that were on display. “She was dead cute.” Kate raved.

Although Kate Middleton’s children are cuter than a bunch of bugs in a rug, the important things to note are the values on display. The duchess knows that simply throwing away old clothing is wasteful. Kate and her kids not only wear the same things more than once (like everyone else), but Kate Middleton is actually known for donating old baby clothes to charity.

Obviously Kate’s actions are those of a responsible mother. After all, when one throws away old clothing it all ends up in a landfill somewhere. There’s only so much room for trash, and what then? Kate’s teaching her children to think before tossing things away.

Be that as it may, Kate Middleton’s children aren’t dressed in rubbish even though they may wear the same item multiple times. Kate’s kids can be seen wearing the Spanish brand, Amaia Kids (such as Princess Charlotte’s green coat). Fans of the Cambridges may agree with Kate Middleton that just because a person recycles what they wear doesn’t mean that individuals must be shabbily dressed. Kate’s children certainly aren’t!

The @NatEmergTrust has launched an appeal to raise funds to help local charities support individuals suffering hardship as a result of the coronavirus outbreak.