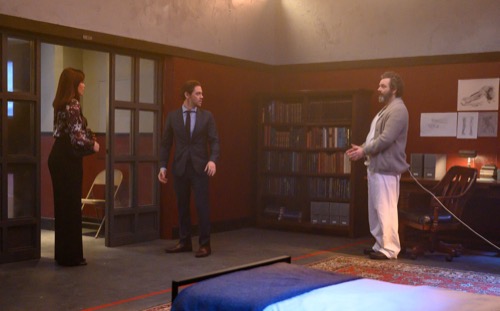 Tonight on FOX their new crime franchise Prodigal Son airs with an all-new Monday, February 10, 2020, episode and we have your Prodigal Son recap below.  On tonight’s Prodigal Son season 1 episode 14 called, “Eye Of Needle,” as per the FOX synopsis, “Jessica continues to search for more information on the “Girl in the Box,” but is confronted by the “Carousel Killer,” who has a very public vendetta against the Whitlys.

While the NYPD investigates families tied to Martin’s victims, it’s ultimately up to Malcolm and Jessica to track down the tip-line caller, turned killer, who is blackmailing her. Meanwhile, Ainsley receives a big promotion at work, but quickly realizes she may never escape the high demand for serial killer reports.”

Malcolm recalls sitting with his dad for visitation when he was in college. His dad jokes about the objects in the room he could use to kill him. He laughs and says he could never kill him, he is his son. He asks Malcolm if he could kill him. Malcolm pauses. No, he tells his dad.

Present Day – Malcolm and his mom talk. He is doing better now that he has had 2 weeks off. Jessica admits she is supposed to go meet a stranger about a the girl in the box. He goes with her to an old carousel. After they arrive, the carousel turns on. There is a dead man on the ride. Jessica screams. Malcolm calls the team. They arrive and assess the team. Edrisa shares that the Vic died from having his throat slit. He was dead last night and by the looks, he was laying in a fetal position for a while. It appears the man who called Jessica wanted her to find the body.

Ainsley is at work and ready to sit in front of the camera in the studio for her segment when someone claiming to be the carousel killer calls in. She puts him on air. He shares how Jessica called him about the girl in the box. She promised money for information. He wants that money or he will kill again.

Ainsley’s father watches her on-air from prison. Meanwhile, Malcolm profiles the killer who obviously has something against his family. He details who to look in to.

Ainsley and Malcolm meet at the studio. He tells her how to interview their killer. She tells him to stop telling her how to be a journalist. Jessica heads to the bank.

Gil and a detective’s head to meet a store owner who they think have a grudge against Malcolm’s family. He is reluctant to talk. He tells them he did nothing but his brother may be up to something.

Ainsley and Malcolm’s dad calls in to the studio to talk. He thinks the killer is doing this because of him. He also thinks the killer doesn’t want the money but something else. Before he will answer, he tells Ainsley he has to go but she can book him for another show. The carousel killer calls in. Ainsley puts him on air. He gives Jessica 30 minutes to meet in the spot she met her ex-husband, The Surgeon. Malcolm calls Jessica to ask her where. She plays dum although she has been watching the segment and plans to pay the ransom. She heads to the park.

The killer calls her when she arrives at the park. He tells her where to go to meet him. When she stops in front of a building nearby he tells her to look up. He has a hostage and a gun. He tells her to dump the money out. It blows into the wind. People in the park go crazy trying to get the money. Gil arrives and helps Jessica out of the crowd. She sees feet away that the killer threw the man to his death after all.

On her way home, the killer calls Jessica again. He wants her to visit her husband and stab him. If she doesn’t do it he has a new hostage on that personal day. Meanwhile, Malcolm has gone to visit his father. He wants to know about His father’s victims that no one else knows about. Jessica shows up, shocking her ex-husband and Malcolm.

Malcolm begins to observe his mother’s body language and facial expressions. He realizes she’s in distress, something he saw before. He starts to question her and realizes that the killer has something over her head. She admits that the killer wants her to kill Martin. After some back-and-forth, Martin begins to help them with the case. The killer is connected to one of his patients. They all begin to fight when Malcolm announces that his father once tried to kill him when he was 10. Jessica is dumbfounded but Martin admits that it is true. He couldn’t bring himself to do it though and in the end, he has been paying ever since. Martin tells Jessica to kill him since he is such a villain. Malcolm decides he will do it instead, plunging a ceramic knife into his father’s chest. The guards come running in.

Martin is rushed into surgery. Malcolm is in the observation room when he eyes he suspicious man in blue scrubs. The man tries to run when the team comes out of nowhere and grabs him. The man confesses that Martin killed his wife, a former patient. Malcolm tells the man that his father never killed patients even if he did kill a number of people. The man realizes that Malcolm is the sun and laughs at him, making Malcolm mad. Malcolm only wants to know where the hostage is. The man finally shares the information.

Malcolm calls Ainsley to tell her that their father might not make it. Gil comes to see Malcolm and asks him what happened in that room with him and his parents.