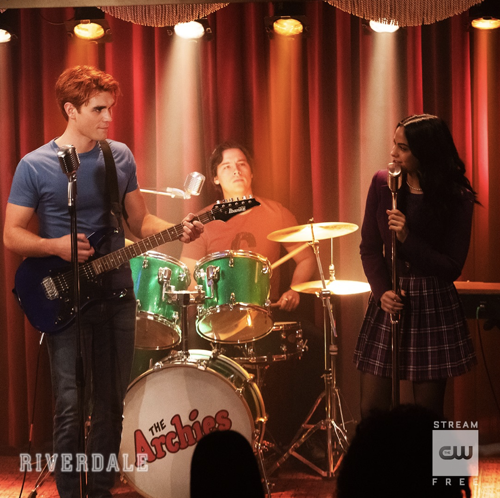 Tonight on CW their drama Riverdale airs with an all-new Wednesday, April 15, 2020, season 4 episode 17 called, “Chapter Seventy-Four: Wicked Little Town,” and we have your Riverdale recap below. On tonight’s Riverdale season 4 episode 17 as per the CW synopsis, “Kevin decides to bring back the tradition of hosting a variety show and ends up rallying against their principal after stopping him in performing a “Hedwig and the Angry Inch” number.”

Mr. lodge is at Archie‘s gym lifting weights when he looks in distress. Archie runs over there to help him and acknowledges that he knows he is sick. Mr. lodge says he is just fine and then he should mind his own business.

Jughead he’s feeling overwhelmed, he has a lot of work to do to catch up so he can graduate with Betty. She tells him he can do it. Later he has to talk to Betty’s brother and asked if he can help with the voyeur and video footage. He asks him not to tell Betty.

Kevin is in dispute with Mr. Keller over the variety show. He wants to do Hedwig. Meanwhile, Archie has decided to sign up for the variety show, he smiles as he put his name down on the form.

Archie goes into the garage and finds his dad’s guitar. Betty confronts Jughead about his average work. Well taking a break and drinking coffee, Archie asked Betty, jughead, and Veronica about performing with him in the variety show. They all seem willing. Kevin interrupts over the intercom with a little Hedwig. Mr. Keller pulls the plug on his performance.

The girls and Kevin are having a slumber party. Kevin is not himself because he still upset about Mr. Keller and Hedwig. All of the girls decided that they are each going to perform a song from Hedwig.

At Pop’s, the ladies all show up and talk to Keller who is drinking coffee. They urge him to hear their plea.

Keller demands they stop when they all break into song and dance. Keller tells them all Hedwig is highly sexualized. He tells them who dares to sing a song from Hedwig at the show will not be able to attend prom.

Veronica calls Archies at the gym. Something has happened to her father. He heads to meet her. He apparently missed a step, but she sees he is getting worse. Archie tells her about the gym. She gets upset. This is her father. Why wouldn’t he tell her?

Betty comes to see Jug and notices he isn’t doing his homework but working on a case. She is annoyed.

Cheryl and her squad show up dresses in drag to see Keller. He decides that he is going to cancel the show since none of them are listening. Betty goes to see Archie. They each talk about their fights with Jug and Veronica. They decide to sing on their own and end up kissing.

Later, Jug visits Betty and apologizes. She cries and tells him its okay. He tells her it isn’t, kissing her. He leaves and she breaks down.

Veronica arrives to see Archie and says she is sorry. She lashed out at him and that was wrong. Just when it seems he is going to tell her about Betty, she cuts him off. They kiss. After she leaves, he throws something and the window catches his eye. Betty is staring back at him.

The gang performs all together at the Pop’s the next day. Betty gives Archie a guilty look as they perform for their friends and the town.

Back at home, Jug sees something gruesome on the video footage, a murder of a man. A woman kills him. Meanwhile, Archie and Betty are together, alone.