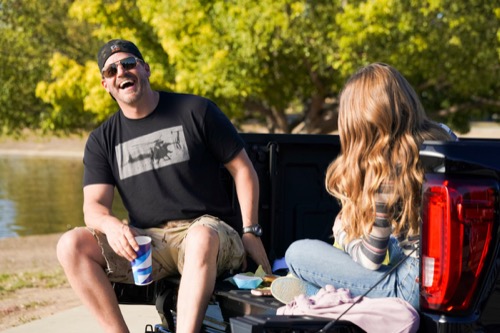 Tonight on CBS their new military drama Seal Team airs with an all-new Wednesday, February 26, 2019, episode and we have your Seal Team recap below. On tonight’s Seal Team season 4 Winter Premiere episode 11, “Siege Protocol: Part 1 & 2,” as per the CBS synopsis, “Amid several life-altering moments on the home front, Bravo Team travels overseas to extract a CIA agent who is being held hostage.

As the situation escalates, the Tactical Operations Center is compromised and Bravo’s support team comes face-to-face with the enemy.”

So make sure to come back to this spot between 9 PM and 11 PM ET for our Seal Team recap.  While you wait for our recap make sure to check out all our television news, spoilers, photos, recaps and more, right here!

Bravo Team carries out rescues all the time. They train for it with field exercises and they were designed to go into dangerous situations. There was nothing Bravo couldn’t do. They worked hard and they partied hard because they deserve it. Most of the team were in relationships. Sonny wasn’t and so he called himself the last stallion. He said he was the last guy not paired up. Sonny could do what he wants and go where he wants and the rest of the team couldn’t say the same. Jason has his new relationship he was working. Ray and his wife just got the house they always wanted. And Clay was finding rocks being put in his bag because the others were making fun of him for being shacked up.

Only Jason’s alone time with Natalie was interrupted when his daughter Emma came back to town. Emma had told her dad she was coming back and he must have forgotten it because he didn’t realize she was home until he brought Natalie back to his place for sex. They were just getting started when Emma “interrupted” them. Jason tried to play it down. He said he and Natalie worked together. They then had to explain how she wasn’t on Bravo and that wasn’t what he meant. It was just really awkward for everyone.

Emma told him she could go hang out with friends. He told her not to bother and so he said goodbye to Natalie because he wanted to spend quality time with his daughter. They later went out to dinner. They had fun together and so Jason managed to still spend time with a woman on his time off. Clay also ditched his friends for a woman. He went with his girlfriend to a benefit and he managed to enjoy himself. He always enjoys himself when he’s around her. It didn’t matter that Sonny was missing him because Clay was in love and he was embracing that.

Clay gave his new girlfriend Rebecca a key. He was ready to move on with her when out of nowhere his ex-girlfriend walks back into his life. Stella recently moved into the area. She was let go from her last job and so that explained the change. Stella also said she wants to talk to Clay again. She seemed like she wanted to be friends with him and she told him she missed him. Clay didn’t know what to do with that. He’s moved on and so he left things with Stella in a weird place. He and the others were doing their best to make sense of their lives when the call came in.

Bravo Team was needed. They were asked to go Caracas, Venezuela because the country’s own SS officers had rounded up some oil executives because they suspected they were spies and it turns out they had been right about one of them. There was a secret CIA Officer in the group. Carlos Ramos had been kidnapped and he was going to be moved with the rest of the hostages to an undisclosed location if he wasn’t rescued in time. There was also an issue with the country itself. There were widespread violent protest throughout the country and it was the Wild West out there.

The country was at a boiling point. Sonny and Clay were arguing because Sonny feels like Clay has changed since he got together with Rebecca and so there was tension in the team. Jason had told them to cut it out. Only he couldn’t necessarily stop them from having an issue with each other. Jason’s mind was also on other things. He had to tell his daughter that he was seeing Natalie and he had to apologize to Natalie as well for pushing her away. Jason knows the statistics for relationships for someone like him. And he knows that he pushed his wife away at one point.

Jason doesn’t want to keep making the same mistakes. He did his best to put it to the side because he had a mission and so he and Bravo dressed up like Venezuelan Special Police as they went about their rescue. They later forced their way onto the location. They looked for the prisoners and they couldn’t find them. Bravo went searching for the hostages to see if they were moved to a different part of the building and unfortunately they came under fire as they searched. Certain members of Bravo came under siege.

The other members of their team created an explosion to draw attention away from them. It freed up their men and Bravo eventually found their hostages. They were just leaving the location when they received word that more of the bad guys were coming their way. It seems someone had called for reinforcements and they pushed Bravo to their limits. Bravo managed to escape them on the road, but the VSP had also found their base. The Venezuelans were attacking their command center and so the intelligence unit had to evacuate the building.

Mandy had to move the meet up point with Bravo to a new location. One that wasn’t compromised and under direct assault. Mandy suggested the doctor’s office. It was the same doctor that helped them locate the hostages and she was having a mild flirtation with him. Not that she thought about that when she was in a building was that being breached. Mandy, Blackburn, and Davis had to fight back. They were waiting for an extraction team to come and get them and that took up to three hours as they tried to fight back.

Luckily for them, the Bravo team came back. They protected Havoc and they all moved to their new site together. They went to the doctor’s office where they found blood everywhere. It turns out the doctor’s office had been compromised as well and there was no sign of the doctor or his colleague. They were most likely dead. Mandy realized that and she blames herself. She realized the doctor must have been targeted. He was probably tortured for information and that’s how the VSP was able to find them.

Mandy wanted Bravo to find Dr. Craig. She felt she owed it to him to rescue him because she was the one that brought him into all of this and Jason told her they couldn’t waste resources on the good doctor. Jason was being practical. They were under constant siege and even their current location couldn’t be trusted. He thought they should focus on getting out of the country alive. They couldn’t rescue the doctor and he told her as much. Jason had made a decision for the best of his team. Ray thought long and hard about that.

Ray was vying for a more commanding position for himself. He’ll have to make calls like that one day and he doesn’t know how he’ll live with it. He thinks it might just haunt him one day. Ray was considering the future when Davis became dizzy. She took a head wound back at base and she was slightly concussed. She didn’t want to tell anyone because she didn’t want to be considered a hindrance and so her friends had to step in. They told her how important she was. She was important to the mission and to them. Her friends didn’t want her to get hurt.

Sonny had even stayed back so that he could check on her. Sonny and Davis haven’t been the same since they tried out a relationship and were forced to break it off. They had a moment in which it looked like they were about to kiss and sadly they were interrupted. The moment passed and they went back to being professionals. They were waiting for the extraction team as Jason caved to Mandy’s demands. Mandy kept pushing him to save the doctor and he later decided to go along with it because he thought Bravo could do it in what little time they had left in the country.

Jason took his team and Mandy and they kidnapped a VSP officer. They tried to get information out of his about the doctor and the guy refused to talk. He was more scared about the VSP than he was of the Americans. Bravo received no information from their hostage on where Dr. Craig could be. They had to get the information themselves and it wasn’t good for them or the doctor. The doctor was in an unknown location surrounded by an unknown amount of combatants. They had no intelligence on what they were walking into.

Jason later informed the team that if they had an issue with rescuing the doctor that they should speak now. They were about to take on the most dangerous mission yet and he didn’t want there to be any doubts about it. Jason cleared things with his team and then pursued Dr. Craig. They were on their to saving the man’s life when again Havoc’s position was compromised. The officers had to leave the doctor’s office and they couldn’t provide back up to Bravo.

Bravo was once again on their own and that made their situation worse, not better.