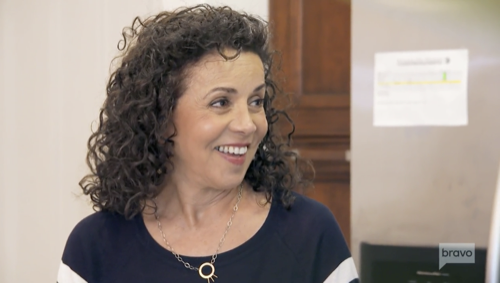 Tonight on Bravo, Shahs of Sunset continues with an all-new Friday, May 1, season 8 episode 13 called “Bye, Bye, Ms. Iranian Pie,” and we have your weekly Shahs of Sunset recap below. On tonight’s Shahs of Sunset Season 8 Episode 13 as per the Bravo synopsis, “The Shahs are back in LA for the final episode of the season. GG is preparing herself for another IVF journey. Nema and his sister Mona gather with their dad to get closure on their parents’ divorce. MJ hosts a Sip ‘N See for baby Shams.

Destiney is caught in the middle when Mike sides with his girlfriend, Paulina, and not MJ. Sara prepares for a Fourth of July party and everyone is invited.”

MJ went out to lunch with her family. She, her husband, their son, Shams, and her mother Shams went to lunch and they talked about her sip-and-see. She didn’t really have a baby shower. Her pregnancy was too high risk for her to plan one and so MJ didn’t get to enjoy her pregnancy as much as she would have liked. Only things were different now. MJ had her son Shams Francis and she wanted to introduce him to the world. She was going to put together a sip-and-see in which she showed off the baby to friends and family. She also talked to her mother about Reza. Reza and MJ are working on their relationship. And so she wanted to invite him to the event.

Reza wanted to go. He also wanted to drop the restraining order against MJ’s husband Tommy because he didn’t want Tommy to have this on his record and so Reza talked about it with his husband Adam. Adam was fine with not pursuing criminal charges. He didn’t mind dropping it and so what he did take issue with was the restraining order. Adam told Reza he feels better if the restraining order stays in place. Adam wants to feel safe and he wants some reassurance that Tommy can’t threaten them again. However, Reza had already promised MJ that he would be going to drop everything and so now he’s stuck between two people he cares about. His friend and his husband.

Reza couldn’t go to the sip-and-see with the restraining order in place. MJ had invited everyone to the event and certain people like Mike weren’t coming. Mike was frustrated with MJ. She ran off at the mouth and she insulted his girlfriend which in turn insulted him. Mike had needed a break from MJ afterward. He was still upset by everything and so he wasn’t going to the sip-and-see. He was skipping it while others like Destiney were going. Destiney picked up some nipple cream for MJ because she found out that nipples can crack and bleed during nursing. Destiney was also supposed to pass on messages from Mike. Mike hadn’t wanted to go through his reasonings with everyone and so he designated Destiney as his spokesperson.

There was no one at the eventual party to explain why GG wasn’t there. GG was invited and she decided to skip the event because she still wanted to cut MJ out of her life. She couldn’t even fake enthusiasm to see a baby. GG was out and so was both Mike and Reza. With so many people missing from her event, MJ had felt hurt. She was especially upset by what Mike did because she hadn’t meant to insult his girlfriend and all the while he was purposely insulting her by not coming to see her baby. Her baby Shams was very good at the sip-and-see. He slept through most of it and so he was a pretty angelic baby.

Shams was giving people baby fever. Nema had gone to the sip-and-see with his sister Mona and she couldn’t wait to have kids. She wanted them right away. Nema wanted her to have those kids because he knew he wasn’t going to have any of his own and so some nieces and nephews were just what he needed. Nema was unfortunately too traumatized by his own parents to become a parent himself. He talked about it with his friends and they wanted to remain hopeful for him, but he was very clear about his wishes. He wasn’t going to have kids and he wasn’t going to continue a nasty cycle. He was good.

Nema wasn’t going to settle down. Plus, if Nema was going to hook up with anyone it was going to be GG. They had a mild flirtation in Hawaii and it almost led to something more. Things changed when they got back home because they went back to being friends and anyways GG was working on something important to her. GG’s been going through IVF. GG is trying to have a baby. She did get pregnant earlier and she sadly suffered an ectopic pregnancy. It was a setback for her. GG was hoping to overcome it by getting pregnant again she had support from her family. She and her mom have gotten really close throughout this process. GG knows she can always turn to her for help and so hopefully one day she will get pregnant again.

GG and the others were later invited to a party at Sara’s. The last time Sara had a get-together there, it hadn’t ended well. It had actually been the start of the Reza and MJ fight and so some people think Sara’s place is jinxed. They still took the chance of going there because no one had wanted to be left out and so everyone went. Reza showed up with his husband. MJ showed up with her mother. Her mother had wanted Reza to acknowledge her and so MJ talked to Reza and he later spoke with her mother. And at first, everything was fine because everyone was doing what they were supposed to be doing.

Then Reza told his friends about his husband Adam. Adam still didn’t want to drop the restraining order and Reza hasn’t told MJ the truth yet. He was afraid to tell her because he didn’t know what her reaction would be. So, Nema told her. Nema told MJ that Reza couldn’t drop the restraining order and that upset her because she thought Reza must have been lying to her. He hadn’t set out to lie to her. Reza later tried to explain himself to her. He had to side with his husband on this because his husband was afraid of Tommy coming back and this time with a gun rather than a bat. And so Reza wasn’t backing down.