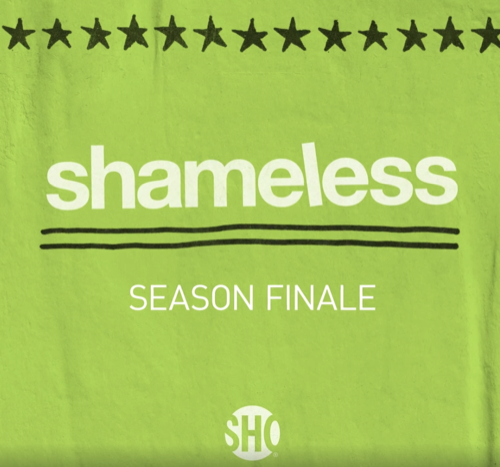 Tonight on Showtime the uniquely twisted and highly entertaining show Shameless returns with an all-new Sunday, January 26, 2020, season 10 episode 12 Finale called, “Gallavich!,” and we have your weekly Shameless recap below. On tonight’s Shameless episode, as per the Showtime synopsis, “In the Season 10 finale, Liam out-Gallaghers Frank; Lip works to convince Tami to stay in Chicago with their baby; Debbie turns over a new romantic leaf; and Kev’s new business takes off, but V wonders where the money is going.”

Tonight’s Shameless season 10 episode 11 is going to be great, and you won’t want to miss it. So be sure to bookmark this page and tune in for our coverage of Shameless tonight between 9 PM – 10 PM ET! While you wait for our recap, make sure to check out all our Shameless spoilers, recap, news & more, right here!

Lip wakes up, he slept in the house last night. He goes to the trailer to wake up Tami and finds that she is not there, and neither is the baby. She left a note telling him to go F himself and the key to the trailer. Ian is getting dressed, Liam asks Ian if Frank is going to walk him down the aisle. Lip walks in and asks Ian if he took his meds, it is going to be a stressful day. Carl asks Ian where Mickey is getting all the money, Ian says from savings. Mickey comes out of the shower, Ian grabs him in front of Carl, who can’t believe it and walks out. Liam asks Carl if he got them anything for their wedding, he says yeah, edible boxers.

The Bamboo Lotus, where Ian and Mickey were supposed to get married is on fire. Mickey runs back to the house, he gets his rifle, loads it and heads out of the house to get his father. Ian stops him on the lawn, Mickey bites him to get loose and Ian hits him twice in the face.

Kev’s new business is going great, a guy comes in and asks Kev if he takes Amex, he says cash only. Kev is really tough on everyone, and they seem to be enjoying it. Meanwhile, next door, V asks what does he have them doing over there. Kev says break a hole so they can join the two businesses. Kev tells the guys at the bar he has twenty full-time keggers. Tommy makes a comment about it not being right that Ian and Mickey are getting married, V gets in the conversation and tells him to mind his own business.

Lip is out looking for Tami and Fred, he goes to Brad’s house; his wife tells him to fire him. Brad tells him Tai just went outback. Lip asks Tami if they can talk about this. Tami drives off with Fred.

Debbie finds out that Mickey’s father burned down the Bamboo Lotus, she tells everyone they still need to go ahead with the wedding, hate can’t win. Mickey says he wants to help by sticking a shotgun down his father’s throat. Debbie reminds everyone that they are Gallaghers, and need to nut up.

Liam goes to see Frank, asks him if he is going to the wedding. Frank asks who is marrying, Liam says Mickey. Frank passes on attending until Liam tells him that Lip is selling the house for $200 thousand and moving to Milwaukee. Frank is now interested, he wants his share of the money, it is his house, not theirs. Frank says he is getting dressed.

Lip arrive home, everything they rented for the wedding is being delivered to the house. Mickey is handcuffed, Lip asks why Ian says because he wants to kill his dad. V and Kev come in, they offer up the Alibi. Mickey tells everyone that his father needs to die today. Debbie and Lip head out to check a Polish place. Julia shows up, she tells Debbie she is staying with her because it is her fault that her mom threw her out. Julie asks Sandy who she is, she says Debbie’s girlfriend. Julia says she is going to have to go to a clinic and get checked for Gonorrhea to which Sandy replies with a punch to the face knocking Julie to the ground.

Debbie and Lip arrive at the Polish Doll restaurant. Ian offers to slap her to make her cry, Debbie says she can just think of something from her childhood with Frank and Monica, that will make her cry. They go inside, Lip goes to see the owner, tells her that they have an emergency situation, her sister was supposed to get married and the place burned down. They get the place. Back at the house, Lip tells everyone that he told them Debbie was getting married – and he will figure it out. Sandy tells Debbie that Julia is up in her room. Frank arrives home with Liam shouting that they can’t sell the house. Frank goes inside and freaks out on Lip. Liam admits to lying, he got Frank to pull up in the Mercedes, and they are going to use it for the wedding. Liam tells Frank that they don’t expect much from him, he can at least show up at the wedding. Frank asks Liam for the keys to the Mercedes, he says he will give them back after the wedding.

Upstairs, Julia is moving in her things and tells Debbie that she is going to the wedding. Julia gets a call from her mother, she tells her she won’t accept her apology and she is at Debbie’s house.

Ian is helping Mickey with his bowtie, tells him that he wouldn’t mind having a kid or two.

At the Polish Doll, Lip introduces the owner to Mickey, tells her that he is the groom and Ian is the best man. Lip takes the owner to the side, asks her if she could say a few words to his sister, she is having second thoughts.

Frank arrives with Liam, he tells him he can’t go in because he knows the owner and things didn’t end well. Liam tells him that whatever it was, she probably won’t remember.

Debbie is all dressed in a wedding gown, Lip walks in with the owner, Debbie falls to the floor and starts to cry.

Mickey’s father finds out where the wedding is moved to. Tami shows up at the wedding with Fred. Its time for the wedding. Lip gives Ian a hug and tells him that he loves him. As Ian comes out, the song, “At Last” is playing. Debbie’s little girl is the flower girl. Mickey comes down the aisle, Sandy is walking him down. Mickey’s father arrives at the restaurant, but they have the outside surrounded, Mickey’s dad leaves, he can’t shoot them all.

The wedding is going on, the vows are read, Ian kisses Mickey, they are husband and husband. In the kitchen, Debbie says she has to go, she missed the wedding. The owner is furious, she asks her staff and they tell her that one man married another. All of a sudden, she sees Frank and walks over to him, starts kissing hi and forgets everything.

V confronts Kev about what the money is for that he is hiding under the bar. Kev says that some secrets are good. He says it is gone, he spent it all. He pulls out a ring box and tells her that she spoiled the surprise. Kev gets down on his knees and asks V to marry him, she says yes.

Tami leaves the wedding with Fred, Lip follows her out, he thanks her for coming. He asks her to go into the house to take a look at her. She says she doesn’t have to look inside, she and Fred are going to Milwaukee and if he doesn’t want to go, that it is his problem. Tami says she doesn’t want his life, she wants to create a life for the three of them. Lip tells her that she is not taking Fred. Tami says she has a house and a job, she doesn’t think he really wants to go to court. Fred starts to cry, Tami picks him up, Lip asks her not to do this. Tami tells him to stop lying to himself, he loves his family more than her. Lip says it isn’t true.

Mickey and Ian leave the hall, they get inside the Mercedes and leave. Frank looks on and tells Liam that he is going to need that car back sometime.

Lip is walking down the street, the rings the door to Brad’s house when Brad answers he says he needs to find a meeting and asks him to go with him. Tami sees Lip, she looks at him with sadness, she knows he drank.

The next day, there is a knock at the door, Carl looks out the window and tells Julia he thinks it is the cops. The cop says that she has an arrest warrant for Debbie Gallagher for the rape of a minor. Debbie starts running, the cops run after her. Meanwhile, Lip is in the house he rented doing some work, Tami walks in to see him. She asks him if he has another mask, he says yes, hands it to her with a hammer.