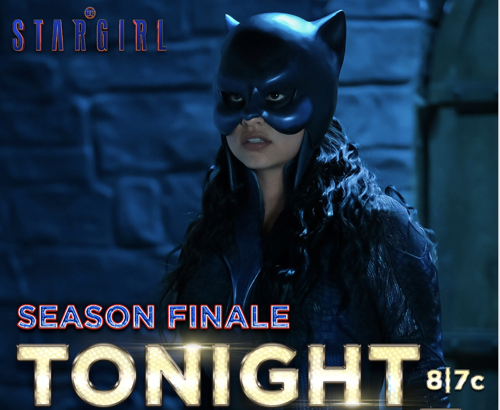 Tonight on the CW their new series Stargirl airs with an all-new Tuesday, August 11, 2020, season 1 episode 13 Finale and we have your Stargirl recap below. In tonight’s episode called, “Stars & S.T.R.I.P.E. Part Two,” season 1 episode 13 as per the CW synopsis, “As the Injustice Society of America come one step closer to accomplishing their mission, Courtney and the JSA face-off with Icicle and the villains of the ISA.”

Three Minutes Ago – Out on the school football field, a tuber player bashes his instrument into a boy who has been bullying him. As the teacher looks around to see what is going on, the football field opens up allowing a satellite through. The satellite sends out a signal, sending some into a trance-like state on the field and throughout Blue Valley. Jordan walks through town. He tells a scared little girl her dad will be a better person after.

Beth looks at Barbara who is also in a trance. Meanwhile, Pat isn’t his self, trying to attack Courtney. She finally gets through to him, breaking him out of Brainwaves’ spell who is broadcasting throughout the town. Beth talks to Chuck. She asks him for help. They talk about how to block the signal. Chuck also thinks they can stop the Gambler by taking his money. Chuck hacks his bank accounts, getting the Gambler mad and distracted. At the wheel of the broadcast, the Gambler becomes more worried about his bank accounts, allowing them to block parts of the signal.

Pat finally returns to himself. Courtney and Pat meet up with the others and come face to face in the tunnels with the Injustice Society. They fight. Just as Dr. Ito tries to kill Justin, Cindy comes out of nowhere, killing her own father. Just as Pat is about to take out Jordan once and for all, a large creature as tall as Pat’s robot throws him into the air. They fight while Courtney and Yolanda head to stop Brainwave.

Yolanda runs into Henry in the tunnels. For a moment, she believes he is Henry but quickly realizes it is his father. With one swipe of her claws, she takes him out, killing him.

The giant rips Pat apart, limb by limb. Rick intervenes just in time. Courtney fights Cindy quickly before meeting up with Yolanda who is standing over Henry’s father’s body. They head to the satellites. As Stargirl, Courtney takes the entire satellite down as me of the school watches.

Barbara attempts to save Beth from Jordan who is angry and looking to attack them both. Rick tells Pat to go and help his wife.

Jordan tales Barbara. He tries to talk her into joining his side. They could save the world. Barbara cries, calling him crazy. He tells her he will kill her, Courtney and Pat. Just then, Pat arrives. Courtney too, as she sends Jordan fling.

Just as Rick is about to finish the giant off, the giant cowers. Rick has a change of heart and tells him to leave. He meets up with Beth and Justin.

Courtney fights with Jordan on the clock tower. Barbara falls over the edge. Pat grabs her. Courtney also loses her balance, fighting Jordan. She falls but Yolanda saves her. Jordan falls to the ground right after but is quickly run over by Mike in the truck. Mike asks if he can be in the JSA. They all hug, smiling.

Later, Courtney and the gang look at the football field. It is like nothing ever happened. Beth is upset that the goggles are broken.

Pat says goodbye to Justin who feels like he did nothing. Pat tells him otherwise. Justin says goodbye to them all, telling them he is going to find his horse and more soldiers. Barbara wonders what they will say throughout the town about the damage. The next day, the news reports an earthquake.

Cindy is digging for something. She finds a diamond-shaped item. She sees Eclipso somewhere in there.

It is Christmas time, Barbara and the rest of the family along with Courtney, Rick, Beth, Yolanda, and Mike bake cookies and celebrates. Courtney waves Pat over to the tree. She hands him a gift. Its a Greatest Dad mug. Pat is thrilled. They hug as Barbara watches from a distance with tears in her eyes.

Later, Courtney’s staff knocks on her window. They go on a ride around a snowy Blue Valley. She sits on the water tank. Pat joins her minutes later. Across town, a man looks for Pat. It is Courtney’s real father.