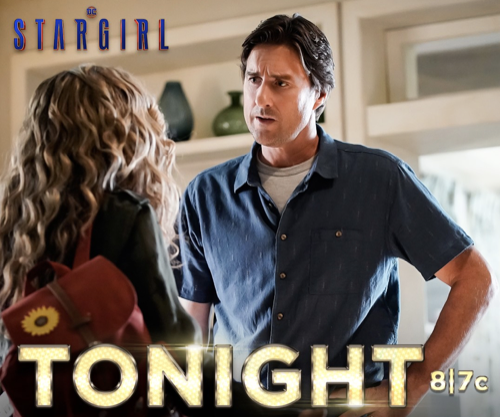 Tonight on the CW their new series Stargirl premieres with an all-new Tuesday, June 16, 2020, season 1 episode 5 and we have your Stargirl recap below. In tonight’s episode called, “Hourman and Dr. Mid-Nite,”  season 1 episode 5 as per the CW synopsis, “As Courtney sets her sights on recruiting more members to the Justice Society of America, Pat finds himself one step closer to learning which ISA members may be in Blue Valley. Meanwhile, a search for Rick leads Courtney, Yolanda, and Beth to Cindy Burman’s Halloween party.”

Blue Valley, Nebraska – Nine years ago – The files of Rex Taylor are sent to Pat. A couple says goodbye to their son. They need to go away for a little bit and the boy’s uncle Matt will watch him. When Matt arrives they tell him that they have made him the guardian of their son Rick. Rick cries after his parents leave in the car. On their way to leave town, they are attacked.

Present-day – A teenage Rick is mad at his uncle Matt for selling his carburetor parts. His uncle reminds him that his life went to crap because he has had to take care of him. He walks to school.

Courtney wakes up to Mikey in a Halloween costume. He scares her. Her mom comes in right after to get her up for the day, picking up her clothes. Courtney stops her so she doesn’t see her Stargirl costume. Courtney packs an hourglass she took from the Justice Society. Before leaving for school, Pat catches her, showing her a newspaper article. It looks like Joey‘s dad was part of the Injustice Society. He thinks some of them could be in Blue Valley. They get to talking and Courtney asks if one of them plays the violin. Pat confirms the Fiddler did. Courtney tells him about the hospital and her principal playing the violin. Pat is angry she went to the hospital.

Two men meet at the movie theater. It appears one of the men did a job for the other. The man pays off the other with cash and a chocolate coin.

After school, Pat and Courtney had to take a ride but his car breaks down. Rick is making his way on foot down the road and stops to help. He tells Pat about the mustang his dad gave him. It looks like Pat might know who he’s talking about but doesn’t say anything. Inside the car, Courtney notices the hourglass is acting strange. After Rick leaves, Pat asks Courtney all about him. Courtney doesn’t know much but tells Pat she doesn’t need a ride and decides to walk. She and her duffel bag follow Rick. He notices that Courtney’s following him. She shows him the hourglass but he just thinks she’s crazy.

Beth shows up at Courtney‘s house. Barbara answers the door and lets her in. Beth tells Barbara that she is a friend of Courtney‘s. After talking to Barbara for a bit and then waiting in the living room, Beth sees the dog chewing on a pair of glasses. She ends up upstairs trying to get them from the dog and decides to go through Courtney‘s room. She tries on the glasses while she’s in there. The glasses give her all sorts of data and come with a voice who can tell her just about anything. It is the voice of Dr. Charles McNider.

Courtney comes home to find Beth in her room. Courtney is mad but Beth rambles on about how she’s been using the glasses and she knows Courtney is a superhero. Courtney tells her this is all a secret and she needs to keep it that way. They get to talking and Beth shares who Rick is and how his dad is a superhero, Rex Taylor.

Pat heads to Rick’s house with the carburetor. Matt answers the door and is less than friendly. Meanwhile, Yolanda and Courtney go with Beth trick-or-treating.

Yolanda is shocked that Courtney has chosen Beth to be the new Doctor Midnight. Beth uses the glasses to tell them where Rick is. He is at a party with all of their high school peers. Yolanda sees Henry in the window and doesn’t want to go in.

Inside the party, Courtney looks around after stealing a mask from a drunk guy. Henry and Cindy get into a fight. He decides to leave and sees Yolanda outside he acts funny as if he can hear things at a different frequency. Inside, Courtney finally tracks down Rick and tries to explain to him about his dad. Yolanda and Beth meet up with them to help. He humors them and tries on the hourglass as Beth tells him about his dad with the help of the glasses. Rick sees how strong he is and decides to part ways with them. Courtney wants the hourglass back but he isn’t returning it. It was his father’s. Courtney and Yolanda head after him.

Rick arrives outside of a diner where Matt is inside harassing a waitress. Outside, Rick punches his uncle’s truck. Beth sits in a graveyard talks to her glasses. She is lonely and can understand Rick. The glasses show her what really happened to his parents.

Rick and Yolanda finally find Rick. He is angry. He is sick of feeling this way. He tells them he isn’t going to be a hero like his dad. Courtney wants the hourglass back and she is ready to fight for it. Beth arrives just in time to tell him his parents were murdered. She shows him. Courtney thinks the people who killed her dad may have killed his parents. She wants justice but he shares that he. Wants. revenge.

A trucker almost hits a Blue Wallet school bus on the road. He gets out and sees a woman playing the violin. Barbara heads to the cellar to Pat about an accident. He heads to his shop to see Matt’s truck punched in. Meanwhile, the trucker dies after being shot by the heavy man from the theater. Pat heads to see Courtney after in her room. She isn’t there but her duffle bag is.