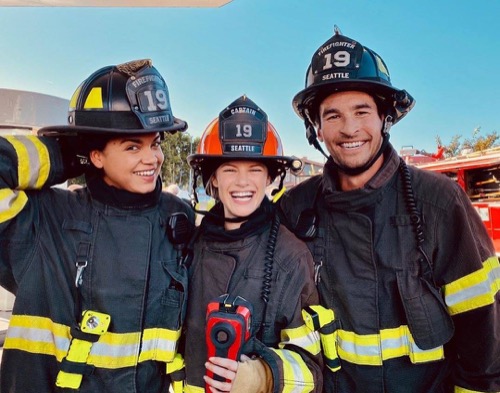 Tonight on ABC Station 19 returns with an all-new Thursday, March 26, 2020, season 3 episode 10 called, “Something About What Happens When We Talk” and we have your Station 19 recap below.  On tonight’s Station 19 Season 3 Episode 10 recap as per the ABC synopsis, “After some tense and traumatic experiences, the firefighters get a visit from a psychologist.”

Tonight’s Station 19 season 3 episode 10 looks like it is going to be great and you won’t want to miss it.   While you’re waiting for our recap make sure to check out all our TV recaps, news, spoilers & more, right here!

Someone in authority called for a Critical Incident Stress Debrief. Its when a doctor comes in to help everyone through a loss and the team needed it after Rigo’s sudden death. Rigo was doing fine. He made it out of surgery and so his sudden death had thrown everyone. They didn’t see it coming. They had no chance to prepare and now they needed to talk about it. They had to talk to Dr. Diane Lewis. She was the trauma psychologist brought in to help and she understood them. She was once a firefighter. She knew what their job entailed and she also knew that she was going to have to push them to talk.

Firefighters didn’t like discussing their feelings. There was a record high of them committing suicide in the last year and so Dr. Lewis was going to make them talk whether they liked it or not. She started first with Jack. Jack told her about his situation growing up. He mentioned how he was almost adopted once time and he also talked about the worst call. Jack’s worst call had been an old lady whose Christmas tree caught fire. She had lived in a crappy apartment and somehow she managed to pick herself up to get a tree. She got a tree. She decorated with what little she had and then she drank alone to keep away the loneliness.

Jack remembers her because to him there was nothing sadder than being all alone. Dr. Lewis next brought in Andy. Andy talked about being passed over for promotion. She said she had made her peace with it and she has. Lewis also asked her about growing up. She was part of a dance team and she preferred salsa. She was a champion salsa dancer. Dr. Lewis had made a comment about how that required skill, as well as sex appeal and that, led Andy to ask who told her. Andy thought the doctor brought up sex appeal because she was talking about Sullivan. So, she brought up Sullivan. Andy admitting to sleeping with him.

Andy even said she was in love with him. She said he loves salsa like her and that they were great together. Andy also made sure Dr. Lewis couldn’t repeat this to her bosses. It was covered under doctor/patient confidentiality and so Andy confessed to everything. She also threw in how she wasn’t ashamed. She knew people would judge her for sleeping with the boss. She asked Dr. Lewis and Lewis didn’t. Lewis instead saw another connection. Lewis pointed out that Andy joined her father at his station and that she went on to sleep with the first captain after her father. Andy said her relationship with Sullivan had nothing to do with her father.

Only she was wrong. Andy started seeing the similarities and she shut up. She didn’t want to talk about Sullivan anymore. She chose to open up about Rigo. Rigo could be a jerk and he could be over-opinionated. He also didn’t laugh at Andy when she freaked out over a raccoon. Andy remembered that as one of Rigo’s good moments and that’s how she’ll remember him. Dr. Lewis next spoke with Montgomery. Montgomery wanted to speak with her while he was cooking and he also outed the Probie. He told her that Dixon Jr. is gay. He’s gay and he has a girlfriend who he has no idea he cheats on her with men.

Dr. Lewis told him she wasn’t going to let him out a fellow firefighter. Montgomery, therefore, started talking in code and he implied Dixon Jr. is a coward. He thinks the younger man is a coward for being himself. Montgomery failed to see how Dixon isn’t even on the same level. Montgomery is the guy who was dressed in drag and stopped a man from beating his wife. He’s the guy that runs into the fire every day and isn’t ashamed to be an openly gay firefighter. Montgomery is braver than he gives himself credit for. Dr. Lewis tried to get him to see that because she also wanted to show him how Dixon Jr. could never be on his level.

Dr. Lewis next spoke with Ben. Ben and Lewis have something in common. They’ve both changed their careers later in life and so they talked about it. They even mentioned his wife Bailey. Bailey was worried about Ben. She liked it when he used to be a doctor because he was safer back then and so Lewis was able to speak from Bailey’s position. She was once married to a firefighter. She said it’s a much different feeling than going into fires herself. Lewis explained it to Ben and she got him to open up. He talked about Rigo. He said he did everything for him and that he and Rigo were laughing about it just the other day.

Then God laughed. Ben refers to what happened as God’s judgment and he feels like God was punishing him. He also felt like he deserved to be punished. He lost Rigo. He lost the baby with his wife. Ben’s worst memory is when he got pulled over by the police and he had to lay down on the ground by the officer’s feet. Ben hated that moment. He reported it. He called his councilman and he even made a donation to the ACLU. Ben thought he was wretched. He didn’t see how righteous he was until Lewis helped him to see it. Ben is a good man. He deserved to have a blessing in his life and he does. He has a wife. He has two kids and he is loved.

Dr. Lewis also helped Miller. Miller has his session in front of Vic. He told the doctor that his mother refuses to meet his daughter and that if his mother refuses to do it his father wouldn’t also. His parents had cut him off. They cut him off financially and emotionally. They wanted nothing to do with him or his child. Miller is ashamed of them because of that. He knows they’re wrong and there’s nothing he could do about it. Miller also wanted Vic to hear because he does have feelings for Vic. He asked Vic to move in and that drove a wedge between her and her ex-boyfriend because Jackson saw what she didn’t.

Miller does have feelings for Vic. Dr. Lewis talked to him about it when they were alone and she suggested he come out with his feelings sooner rather than later. Dr. Lewis also spoke with Jack again. Jack wanted her opinion on what he did and she basically called self-destructive. He hasn’t had a family since he lost the last one and so he constantly thinks grief will come with comfort. Lewis gave Jack her card. She asked him to call her whenever he needed to talk and he wasn’t the last person she spoke with. She also talked to Maya. Maya expressed several concerning topics. Like being jealous of Rigo because he’s dead.

Maya was taught “eyes forward”. Her dad drilled it into her and she’s so exhausted by it. She thinks of dying to go to sleep. Lewis talked to Maya about her dad is wrong. How it wasn’t too late for Maya. Maya took what she said and she asked for several days off. She was going to go be with her girlfriend and just “be” for a while.

Jack meanwhile delivered some groceries to the old lady to lost her tree.

Montgomery and Dixon tried to deliver food to Rigo’s wife, but she rejected them and so they got rid of the food together and it led to them making out.