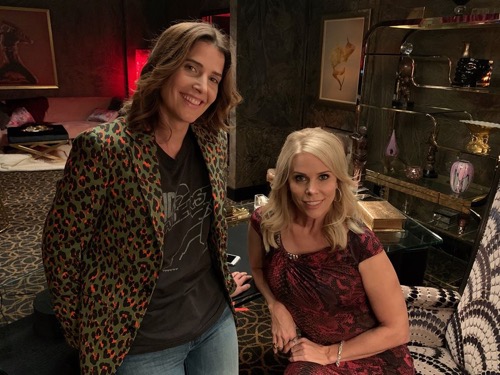 Tonight on ABC their drama Stumptown based on the graphic novel airs with an all-new Wednesday, January 22, 2019, season 1 episode 12 called, “Dirty Dexy Money,” and we have your Stumptown recap below. On tonight’s Stumptown season 1 episode 9 as per the ABC synopsis, “Dex becomes fast friends with a new client, the owner of a male strip club who has been mysteriously losing money, but Dex soon learns not everything is as it seems.

Elsewhere, Grey continues to help Hoffman and his new partner on the car-jacking case while going deeper undercover.”

Tonight on Stumptown, Dex has a new case by a woman named Ginger who thinks her employees are ripping her off from her male dance club business “Hold the Meat”. Dex begins to questions dancers and employees to see if any of them are possible suspects. Dex follows a lead to look into a dancer who made threats to ginger who had financial issues in the past, his name Enrique but he states although they got into a heated argument he has nothing to do with stealing from Ginger.

Dex and Ginger have a nightcap in her hotel room and she gifts her with a necklace and has some make dancers come into entertaining them, but Dex turns down intimacy with the dancer while ginger and the other dancer go upstairs. Dex questions Ford the dancer ginger hooked her up with and asks about Enrique, she goes to question the dancers and finds out about their scheme of stealing money which all have been skimming to steal and help Enrique stay afloat since he got fired form the club.

Cosgrove brings in lieutenant Jimmy to help for the drug operation. Grey has to convince the crew he has a buyer for the drugs, but some have their suspicions, he gets a threat to back off from his friend who brought him into the crew as he feels he’s stepping over his boundaries and on his toes since he brought grey on to sell cars and not drugs.

Jimmy tells Cosgrove how he feels about Hoffman and his lone wolf act with not wanting to cooperate on the case. Grey talks to Max about how she got into the stealing and fixing of cars which she attributes to her dad, she expresses that she’s not into the drug business and isn’t for distribution of the kilo. Jimmy continues to look for Hoffman’s CI information he still refuses to give up any information. Since Ansel has moved out he begins working at the food truck with Tookie baking dessert.

Dex tells ginger she’s discovered the dancers have been taking from her and suggests she change her moral and insists she apologize to Enrique for pushing him off the stage and firing him, ginger takes Dex criticism the wrong way and fires her stating Dex may be the reason Ansel left home. Ginger files a Complaint against Dex and she gets a visit from the P.I investigate bureau who says her license can get revoked of the claims are true, ginger said Dex tried to sleep with her dancers who ginger really hooked Dex up with and that dex accepted a necklace gift from her which ginger genuinely gave dex before Dex criticized ginger and she became offended, now these claims can jeopardize Dex’s career.

Dex goes to seek advice from another P.I and she tells Dex not to lay down but fight, Dex then goes to file a Complaint against Gingers club.

Grey tells Hoffman the crew is sitting on 20 kilos which is millions worth of kilos of heroin. Jimmy and Cosgrove confront Hoffman on why he isn’t sharing information on the case and his CI, he tells them about the Kilos and Jimmy insist he tells them the location it’s being held at but Hoffman refuses and it comes to light Hoffmans former CI was killed and maybe that’s why he is moving so cautious. Hoffman tells Cosgrove he doesn’t trust Jimmy and that’s why he’s so tight-lipped about the case.

Grey is at the warehouse and Jimmy is seen outside entering the warehouse. Grey is brought up by Leo and questioned about his past from what a man Galvin told him. Grey convinces Leo Galvin was a snitch and not to take his word, Leo listens and agreed to meet with Greys buyers. As Jimmy is walking to enter the warehouse looking for the kilos with his gun drawn he is met shit Hoffman who tells him he’s at the wrong warehouse. Turns out Jimmy stole a dummy file off his desk and it turns out Jimmy is a dirty cop and was getting paid to steal the kilos, he’s met with Cosgrove and other policemen and is handcuffed and taken away. Hoffman has to find someone to front as the buyer and refuses to put another cop on the case to trust issues. Hoffman and grey go to Dex for help to act as the buyer for the kilos.

Ginger meets with Dex and tells her she overreacted and both agree to drop the complaints against each other. Ansel surprises Dex with a cake he baked from the truck.