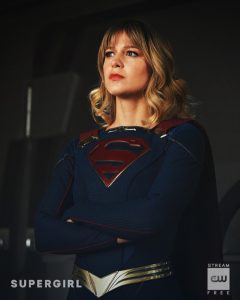 Tonight on the CW the series Supergirl airs with an all-new Sunday, May 10, 2020, season 5 episode 18 and we have your Supergirl recap below. In tonight’s episode called, “The Missing Link,”  season 5 episode 18 as per the CW synopsis, Supergirl (Melissa Benoist) and the team go head to head against Rama Khan (guest star Mitch Pileggi) and Leviathan.

Lex Luther thinks he has to make certain people think he is on their side to get them. He doesn’t want people to die, but some time for the greater good, he has no choice.

Andrea is pitching Obsidian Worldwide Unity Festival, Kelly is there and tells her they are not in a position to launch this event. Kelly says they have everything they need to launch this event, and would appreciate it if she did not waste her time.
Alex meets with Pete, Kara is there as well. They tell him they are looking for a description of a symbol. Pete says he thinks he knows where to start.

Gemma goes to see Rama and tells him that she is giving him a second chance to kill the supers, and this time, don’t fail. This weapon was stolen from Lex at the Fortress.

Kara thinks that Mina a Lex is working on something. William calls her and tells her that he found something on Margo.

In the prison, the inmate who attacked also freaks out and turns violent and attacks another inmate. All the inmates are fighting with each other, the place is going crazy.

Dreamer is having a dream, and it leads her to Rama Khan.

Supergirl is alerted where Rama Khan is trying to cause a major earthquake. Brainy and Supergirl go up against Rama Khan. In the prison, all heck is breaking loose, when prisons run after Lex, but he managers to get into a room and lock them out. Supergirl warms Brainy that she thinks Lex is working with Leviathan.

Brainy is restrained and in a room with Rama Khan, Supergirl is watching. Dreamer thinks this whole thing is a trap. Rama Khan breaks free of his restraints.
Despite Supergirl’s efforts, Rama Khan gets all the kryptonite at the DEO and escapes. Supergirl, Brainy, and Dreamer are safe. Dreamer wants to know what the heck Brainy was doing with Rama Khan, and what does it all have to do with Lex Luther. He says he can’t. She tells him that he can’t play from both sides anymore.
Lena is able to reset Non-Nocere, although it sets people back to normal. She tells him that is dead, and she was delusional to think she could fix it. Lex agrees, he says humanity needs to be controlled. Lena is starting to realize that she has been manipulated by Lex, this has always been about him. She calls him a monster and she tells him that that doesn’t mean that she has to be one too.
Alex returns home to Kelly and tells her that she put Pete in danger. Kelly tells Alex that if she is going to be a vigilante she should start wearing a mask.
Lex has the prison burned down with the prisoners inside to cover his tracks, he gets an invitation to the Leviathan ship.
William gets himself kidnapped.
Lena goes to see Kara and apologizes for making a terrible mistake. She was hurt and she thought she could make the world a better place and she was wrong. She tells her that she is wright, she became a villain, she is hoping that she will believe her that Lex is working with Leviathan and are going to do something terrible.

Kara invites her to sit down.