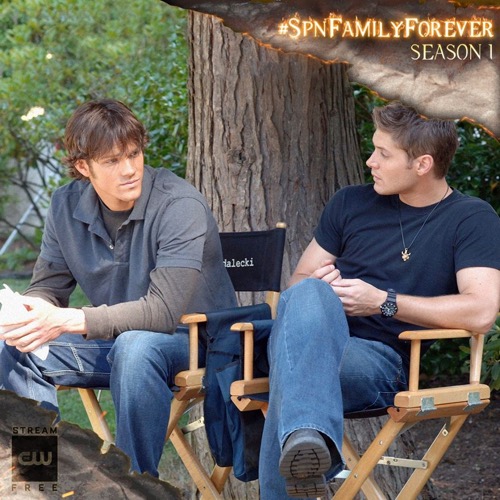 Supernatural airs tonight on the CW with an all-new Thursday, January 23, 2019, season 15 episode 10 called “The Heroes’ Journey,” and we have your Supernatural recap below. On tonight’s Supernatural episode as per the CW synopsis, “Sam and Dean hit the road to help an old friend, but it appears that their luck may have finally run out and they are the ones who may be in need of rescue.”

A crowd of monsters watch and cheer as two other monsters fight in an octagon. Meanwhile, Dean is loading up on beer and junk food at a quick stop while Sam burns dinner at home. Bad luck is in the air as Dean’s card is declined, Sam burns his hands and more. Dean heads home to tell Sam about his bad luck; declined card, parking ticket. Sam starts sneezing. He is also having bad luck. They get a call from Garth, who needs a favor. They head out in the car to meet him, talking about their bad luck. The car breaks down. Dean knows this is all more than just a bad day.

They make it to Garth’s and meet the kids. The twins are named Castiel and Sam, making Dean irritated. They head up the stairs to meet Garth’s wife’s cousin, a werewolf, who was recently in a fight. He has stab wounds. Dean grabs a piece of candy, chews, and winces. Sam sneezes. Garth takes Dean into his cellar where he has a dentist’s office, forcing him into the chair, and his wife, Bess, gives Sam a secret, horrible tasting drink for his sickness. Sam has tears coming out of his eyes. He falls to the floor. The twins cry while the little daughter consoles him. Meanwhile, Dean has 17 cavities. Garth gives his nitrous oxide. Suddenly, he and Garth are decked out in white suits, tap dancing. A while later he comes to and sees Garth, who tells him he is all done.

Back in the living room, Garth and his wife want to know what is going on with them. They finally share that it is God. He is making their life a living hell. Garth thinks Chuck may have made them extremely “normal”. Garth’s wife’s cousin, Brad, wakes. They all go talk to him. After some back and forth, he confesses to fighting at a monster club. Sam and Dean are headed there. Garth tells them what with their normal luck right now they may not want to go. They head out anyways.

When they arrive at the warehouse, Dean has eaten so many grilled cheese sandwiches made by Bess he needs to throw up. He runs to the bathroom. When he pulls his head out of the toilet there is a man there with a gun.

Sam and Dean are locked up in the octagon cage. A shifter named Cutty comes to talk to them. He tells them all about how he is a sportsman. He doesn’t want to kill them, he wants to see them fight. He brings out a big vampire. Dean laughs. He must know their reputation. They will burn this crap hole to the ground. He can’t wait! Later that night, monsters come in droves to see the Winchesters. Sam and Dean try to pick the locks to their cages but their normal now so they cannot get out. Noe they are going to die fighting a super vamp. They both get down on themselves until Dean picks them back up. They have been fighting this whole time. And they are going to find a way to make it now even of Chuck made them normal.

It is time for the main event. Cutty goes to get Sam and Dean but they have broken out of their cages after Garth has arrived to save them. He gets them outside and then blows the place up with C4. They all laugh until the super vamp comes outside. He sends Garth flying with one hit. While Garth is knocked out, Sam and Dean take turns trying to fight the vamp but only hurt themselves. Garth comes to and takes the vamp out with a knife.

Back at Garth’s, the boys say goodbye to Bess and the kids. Outside, Garth sees them off and tells them to stay safe now that they are normal. He has heard of a place in Alaska that may be able to help. Either way, they need to figure something out. In the car, the boys decide Alaska is the way to go.