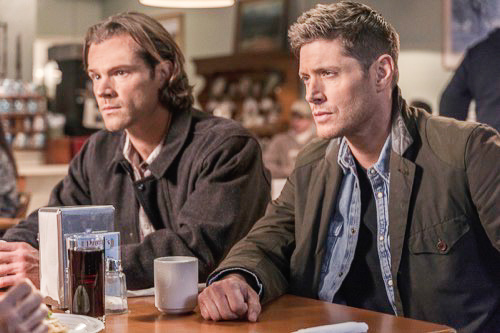 Supernatural airs tonight on the CW with an all-new Monday, October 22, 2020, season 15 episode 16 called “Drag Me Away (From You),” and we have your Supernatural recap below. On tonight’s Supernatural season 15 episode 15 as per the CW synopsis, “Sam and Dean are asked to investigate the murder of a childhood friend, calling them back to a motel from their past and perplexing the brothers with a case they thought was solved a long time ago.”

A man named Travis checks in late to a motel. He requests a special room. He visited the Inn a long time ago. He heads to his room, scared to open the door. Inside he drinks and sits on the bed. His cell rings. He doesn’t answer. He talks to himself, saying it was never real. A young boy appears, scaring him. The man tries to getaway. He screams before dying.

Sam and Dean are in the car headed to find out what happened to their old friend Travis. They talk about Cas and how he just took off. Dean plays dumb, saying he doesn’t really know much. They arrive at the motel where Travis died. They remember being there as kids.

A flashback shows a young Dean and Sam fighting over Sam thinking about college. Dean tells him that hunting is their life. Later, a young Dean meets two kids at the vending machine, a brother and sister. The same young boy who Travis saw on the night of his death.

Sam and Dean meet with Caitlin. They tell her how sorry they are about Travis. She admits the funeral was last week. She didn’t reveal this because she needed them to come. She tells them that “she” is back, reminding Dean about that unseen force that terrorized Travis in the motel when they were young.

Back at the motel, Sam and Dean go over the death report and look through the room where Travis died. Nothing points to any supernatural force. Caitlin is mad that they don’t believe her. Dean reminds her that the thing they dealt with as kids only preyed on kids.

A flashback to when they were kids shows Sam and Dean with Caitlin and she bothers trying to figure out what monster was responsible for going after her brother. It leads Dean to an abandoned building. Caitlin shows up. He is irritated since he told them all to stay behind.

A young Dean and Caitlin make their way through the building in the dark. Back at the motel, Travis writes something on a notepad about killing. Suddenly, a monster appears and tries to attack them. The monster seems to leave powers with Travis’ ring that is around his neck.

Dean comes face to face at the motel with his younger self. The young Dean tells Dean he failed. Dean is ready to plunge a knife in his gut when Sam interrupts. Dean realizes Caitlin is right.

Sam and Dean meet with Caitlin. He admits to her she was right. He tells them both about the monster he found when they were younger. She was feeding on kids. He didn’t want to tell them.

After, Dean heads to grab food from a diner to go. Billy appears next to him to share how Chuck has demolished all of the worlds except one, their world. She visited Jack to give him his last mission. She is sure Jack will go through with it since he feels bad he killed their mom. Billy tells him this is the last time they will see one another since she isn’t at the end of Chuck’s stories.

Back at the motel, Sam and Caitlin discover their monster has a ring similar that that of Travis’. Caitlin heads to the car to see if she can find Travis’ ring is his belongings. Instead, she finds the ghost of Travis. She screams. Sam heads to help but she is gone. Dean returns. They look around.

Sam and Dean say a sad goodbye to Caitlin. On the ride home, Dean admits to Sam that he talked with Billy and how Jack is going to die if he wants to kill Chuck and Amara. He admits he knew about Jack from Cas. Sam is angry. They cannot let him kill himself. Dean tells him it is the only way.