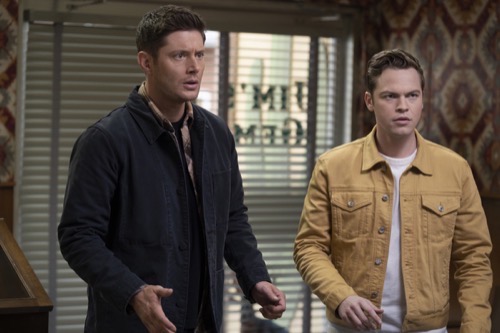 Supernatural airs tonight on the CW with an all-new Monday, October 22, 2020, season 15 episode 17 called “Unity,” and we have your Supernatural recap below. On tonight’s Supernatural season 15 episode 17 as per the CW synopsis, “Dean hits the road with Jack who needs to complete a final ritual in the quest to beat Chuck. A difference of opinion leaves Sam and behind looking for answers to questions of their own.”

Cas checks in with Sam. He has been looking into another way to kill Chuck but is still at a loss for a solution. Dean comes in and tells him there is no other way but using Jack. They hear a noise. It’s Amara in their bunker. She tells them Chuck has returned. She meets Jack. She wants to know what they plan to do. She isn’t on their side yet but reminds Dean they will always help one another. She disappears.

Dean asks Sam if he is ready to hit the road. Jack is coming with him. Sam tells him he isn’t going. Dean tells him that there is no other way. He reminds Sam that Jack isn’t family either. Jack overhears this but still tells Dean he is ready. They take off. Back at the bunker, Cas arrives. Sam tells him he too is looking for another way.

Amara is in a park, breathing in the fresh air when Chuck arrives. He needs her help. She scoffs. He has been ending worlds. He thinks the Winchesters have gotten to her. She isn’t on anyone’s side. She asks him to walk, enjoy the air, the beauty. He sees his flaws. He wants to start over from scratch. Humans are the worst of it all. She brings him back to heaven to meet his fans. They surround him. He gets annoyed and sends them away. She tells him she wants balance. But can sense he is all about himself. She brings them to Winchester’s bunker. He tries to transport but it doesn’t work. He realizes he has been trapped. She tried to give him an out but he wouldn’t take it. He gets angry.

Dean tries to explain to Jack in the car about what he said. Jack tells him he understands, he isn’t like Cas or Sam. They stop at the location Billy directed him to. Inside they find Adam, the Adam, the first human, and not Eve, but Serafina. Adam and Serafina make out. Dean has no idea what is going on but he wants to get the show on the road. Adam brings Jack back into a room and asks him to pass a test by selecting the crystal God touched. Jack selects one. They come out. Serafina plunges her hand into Adam’s ribcage and takes out a rib. Jack and Dean are in shock.

They give the piece of a rib to Jack. They tell him that he needs to use it when it is game time. On their way home, Dean tells Jack that he is thankful for all he has done and how he is working to give Sam and him a life free of all of this. Just then they realize it is time.

Sam and Cas find another possible alternative. They find the key and open death’s door. Sam goes in alone, telling Cas that if Sam beats him back please buy him more time.

Sam enters and hears screaming and crying. He discovers Meg. Meg is there looking for Billy. She promised her she could have the job of death. Billy wants to be the next God. Meg gets the idea to torture Sam a little until Sam tells her Billy sent him for her book. He tells her Billy is working to honor her promise. She hands over the book. Sam arrives at the bunker but learns from Cas that Amara and Chuck are there.

Amara tries to tell Chuck he can change his mind. Dean and Jack arrive. Sam tells Dean this is all Billy. She wants them to kill Chuck so she can take over. Meanwhile, in the other room Chuck shares he planned all of this while Dean pulls a gun on Sam and tells him to move. He is bringing Jack to Chuck. They fight as Chuck tells Amara they are planning to kill her too.

Sam tells Dean they will go back to the beginning while Amara cannot believe Dean lied to her. Chuck manipulates her, telling her they can get rid of the humans and start over with balance. Dean tells Sam he would trade it all in to get rid of Chuck. Sam asks, even me? Chuck gets Amara on his side. Sam begs Dean to trust him, to do what he says. He cries, pleading with Dean. They will find another way. Dean puts the gun away.

An explosion tears down the hall. Chuck comes out of the door. He is irate. After all of that, Sam has done it again. The brothers are once again a team. He is so sick of it all. He tells them that broken toys get thrown away before telling them he is going to kill Jack. Jack collapses to the ground in pain as they yell.