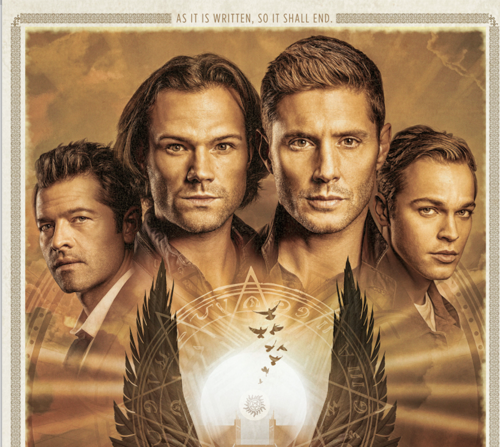 Supernatural airs tonight on the CW with an all-new Monday, November 19, 2020, season 15  called “The Long Road Home,” and we have your Supernatural recap below. On tonight’s Supernatural season 15 as per the CW synopsis, “Get ready for the series finale with cast interviews from Jared Padalecki, Jensen Ackles, and more.”

The stars and creators look back on the creation of the show that is the longest-running in its genre.

Creator Erik Kripke has always wanted to make a monster show. Two guys in a muscle car, in and out of these urban legends. Kripke knew the world of the brothers would pull people in. They are average joes that fans have fallen in love with. It was the Luke Skywalker and Hans Solo mix that inspired Kripke.

For Jensen, the whole thing, the image, the car, the brothers, the road is what draws people in. Not to mention the evolution of the characters. The brothers as well as Bobby are beloved by fans. He has become in some ways the boys’ real father.

The boys and their love for one another have also been a huge draw for fans. It has anchored the show. Watching them get through all of these difficulties. For Jensen and Jared, the brothers and their love.

Knowing it was too easy to have a higher power come in and save them, Kripke brought in the angels but made them d$cks. It was also fun bringing in characters that many both loved and hated. The show has a history of making villains friends, for example, Crowley. He ended up caring for the Winchesters. They often teamed up. Then there was the intro of Castiel. He was an alien character whose motives were unclear from the start. But he has grown into more of a human after many seasons of hilariously awkward moments. He became like the third brother. Playing the role of Misha Collins has been gratifying as his character has grown.

The core theme of the show has always been about family. The brothers and their loyalty has made fans fall in love with them. And the family they have created with others.

Filming a Scooby-Doo episode was a dream come true for Misha. For Mark Sheppard, these shows were little gems.

At the end of the day, the heart and the soul was always the brothers and their relationship. If they stay together things always worked out. They could do anything together and that is what has resonated with fans.

Another huge character in the show was Dean’s Impala. For Kripke, the car was always the third character. One episode was completely dedicated to the car, from the car’s viewpoint.

Other characters that made the show was Lucifer, Jodi Mills, Rowena, and more. So many great, interesting odd characters, according to Mark Sheppard. The introduction of Chuck also brought the show on a great journey. At the time no-one knew what would come from the intro of Chuck who ultimately became God.

Rowena was also a great asset to the show. At first an enemy, she becomes close to the boys, helping them. She sacrificed herself for them. Other characters also had their moments when they sacrificed themselves. Some of them were victorious and some were not but they were always inspiring.

Then there was the introductory of Jack. No-one knew if he was good or bad. Sam was empathetic towards him while Dean didn’t warm up to him as quickly. Befriending him was hard for Dean. There was a lot of fear there but this wasn’t a first for the show. The brothers have been in fear and fighting since the beginning. They are warriors who always go down swinging.

We got to see another side of the boys when their mom Mary came back. Seeing more of her character was as great as she evolved. This also brought about the family reunion of Sam, Dean, Mary, and John. Fans were able to see the four together in the episode Lebanon which was very emotional and something the brothers’ always hoped for.

The cast and crew hope fans love the finale and that what it has all met lives on. There was a lot of love that went into making this show. Jensen will never say goodbye to Dean. Erik Kripke will be proud for the rest of his life.