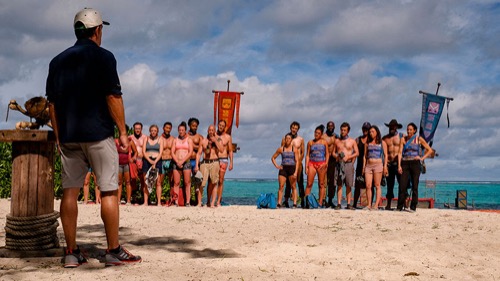 Tonight on CBS Survivor airs with an all-new Wednesday, February 19, 2019, Season 40 Episode 3 and we have your Survivor recap below. On tonight’s Survivor season, 40 episodes 3 called “New-school players attempt to take control against the old-school players in an effort to change up the game. Also, chaos ensues on Edge of Extinction when an opportunity presents itself.”

Since the last Tribal Council, Adam knows the three old schoolers are running the show. Boston Rob feels like he needs to be in control all the time, he won this game because he feels he has to be in control from start to finish. Adam thinks Rob has to play a little bit more like him. He thinks this is the time to draw a line in the sand and get rid of the big dogs. Adam goes to Denise and enlists her helps in getting rid of Parvati. She feels secure that they are both good and knows they need to take control. Adam goes to Ethan and tells him that they really have to pick and choose who they are willing to put themselves on the line for. Adam tells him that he is trying to get rid of Parvati. Ethan thinks Adam is nuts, why would he tell him that when he knows how close he is to Parvati.

On the other tribe, Sandra is trying to prove her worth and catch some fish. Tyson finds that it has been a rollercoaster and just wants to through the target to someone else, namely Sandra who has already won two million dollars from Survivor. Tyson goes to Yul with his proposal, but Yul doesn’t trust him, even though his proposal is interesting. Sandra caught a shark for breakfast; thank goodness it’s a smaller one. Yul now doesn’t want to get rid of Sandra, because he likes the food. Sandra knows Tyson is coming after she and she said he is going to pay the price for it.

At Edge of Extinction, the women catch fish and are able to have a meal. They find a lockbox and have to find the numbers to open it. Amber looks all over camp to figure it out. Natalie also looks around camp to try and figure it out, she does. She wins a steal a vote advantage. It has no advantage on Edge of Extinction, but the goal is to pick the right person who would buy this from her for one token.

Dakal, day 8. Sarah is going through the bag and sees something she didn’t put in there, it is a note. It’s the stolen vote from Natalie. Sarah knows how to play it and knows how powerful it is, but it will cost her the one token that she has. The thing is, she has to go into the other camp to get it. She enlists Tony’s help, he camouflages her face with some dirt and she heads over to Sele in the dark. The power is hidden inside one of the torches, she ends up finding it.

Time for the Immunity Challenge where they are going to leap against a series of ramp walls to get to a sandpit, dig up a ladder, climb it, retrieve a rope, use the rope to get to the top of a tower, where they will solve a tree puzzle. The winning trip will win immunity and chicken kabobs. Rob slows down his tribe when he is the one to toss the rope up on the top of the tower, a misses repeatedly. It doesn’t take long for the teams to be in a tie. It’s really close, anyone’s game. In the end, Nicole does it for her tribe. Sele is going to Tribal Council, they were literally one or two seconds away from winning.

Adam goes to Rob and tells him that he is going to blindside Parvati. Rob is surprised, how can the guy do that and tell Rob, hasn’t he ever watched Rob play this game. Rob goes to speak to everyone, he is forcing his hand, now Adam has to go. Parvati also know Adam’s plan, it’s a no brainer, he is going home.

At Tribal Council, Adam tells Jeff that everyone is close to someone in the tribe. Michelle says it is hard to trust someone, but she sticks to the people who make her feel giddy, like when she is dating. Rob says you have to trust someone, but inherently, this is a game and you shouldn’t trust anyone. Parvati says that she is a billboard target, her name was thrown out. Ben says he is happy with what bunker he has jumped in. Ethan says he doesn’t know about bunkers, he just needs to get through this Tribal Council. Time to vote. No immunity idols are played. First vote Parvati, then Adam, Adam, Adam, Ethan, Ethan, Ethan. It’s a tie. The fourth person voted out, Ethan. Rob is not happy, Ben smiles. Ethan leaves his token for Parvati.