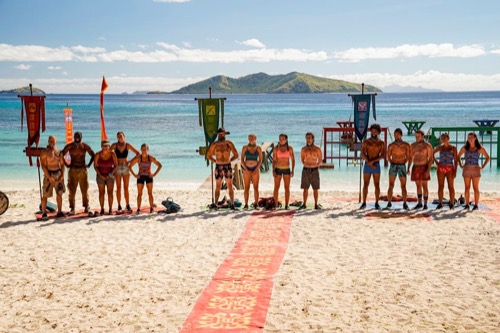 Tonight on CBS Survivor airs with an all-new Wednesday, March 18, 2019, Season 40 Episode 6 and we have your Survivor recap below. On tonight’s Survivor season, 40 episodes 6 called “Quick On The Draw’ as per the CBS synopsis, “The immunity challenge weighs heavily on castaways when two tribes are sent to tribal council. Also, one castaway on Edge of Extinction is acting sneaky.”

Ben is happy that Boston Rob is gone, he says he was disrespectful and now, he is going to build relationships and have fun in the game. According to Adam, the wicked witch is dead and they can do whatever they want now. And, he has noticed how Ben has become closer to the women, yet barely talks to him. If anything, he feels more alone now that Boston Rob is gone.

At Edge of Extinction, Rob tells his wife it’s a nice place they have there. Tyson walks up and brings log that has a note on it, “it’s another chance to earn a fire token, there is something hidden on the edge, the more stones you turn, the more chances for success, then again, sometimes you are just in the right place at the right time.” Tyson doesn’t have a fire token yet, and there are four people that do, he really needs to find it now. Rob thinks edge has a double meaning and the stone is at the top of the cliff. Rob estimates there are almost eight million rocks on the island. Tyson thinks the main phrase was, in the right place at the right time, and the only thing that has time is the tide.

Tyson finds it, but when Rob sees him, he pretends he has to pee. Tyson has it and says nothing. When everyone goes out again to look, Tyson pulls out what he found and reads it, “this is an idol nullifier, when played correctly it can block the use of an idol and Tribal Council, it has no value, but you can sell it to a player in the game for one fire token.” The most important thing, is the person that he gives it to, buys it. Tyson gives the idol nullifier to Parvati, she in return gives up the one fire token. Tyson buys a jar of peanut butter with his token; one it will boost his spirits, mentally, and give him extra calories so he is ready for the challenge.

Time for the immunity challenge; today they are going to swim out to a boat and retrieve three bags of rice, they will then work together to get those bags through a hole and back to shore where they will tear them open and retrieve three balls. They will then maneuver those balls through a maze. The first tribe and only the first tribe to finish wins immunity. Both of the losing tribes will go to Tribal Council and both tribes will vote out someone. In addition, they are playing for a reward. The first tribe will get peanut butter & jelly with milk.

Parvati is the target, Nick is bummed, he always wanted to play with her. Parvati knows that Wendell is behind it. Michelle goes to Wendell and tells him that she wants to write his name down so Paravati leaves her the fire token. He is in shock, Michelle wants her cake and eat it too. Wendell doesn’t trust Michelle, and she is upset about it. When she was dating him, she was the one who got burned, so what makes him think she will align with him. Wendell goes to Parvati and tells her he is voting for her, and she will probably vote for him.

She asks him what they should do, how can they shake things up. They tell each other that they think both are messing with each other. Wendell is so confident, he thinks he owns the place. He tells her Parvati to give him two fire tokens and then they can pick someone else to vote out. Parvati goes around and shares her conversation with Wendell. The tide is turning, this is a huge decision, Parvati is a visible threat, but Wendell is a hidden threat.

At Dakal, everyone is sorry. There are only five people on the tribe. Tony wants to get information, so he walks away from the tribe and they spy on them to get information. The tribe knows that he is gone, Sandra says that Tony is probably looking for an idol. Jeremy is worried, he is part of the old Sele, but he does have safety in his pocket. Denise feels really uneasy, she goes for a walk with Sandra and Kim. Denise’s game is to play humbly. Sandra says she has a crazy feeling, Tony is still missing. Kim says that Tony always gets like this on tribal days.

Tony is back, he says he was out looking for an idol. Kim is concerned, she is aligned with Tony and she doesn’t like that he acts weird on tribal days. Denise is the target, and Sandra still doesn’t know how she feels about that. She is worried because the only one that is going to benefit is Tony if Jeremy hangs around. Sandra goes to Denise, tells her to give her two fire tokens and she will give her an immunity idol because her name is going to be written down. Sandra knows that her days are numbered if Tony stays in the game. Sandra tells Denise to think about it, it has to be between the two of them. Denise has an idol in her bag, so she doesn’t need the idol from Sandra. Denise tells Sandra that she gives her on token now and one token when they get back from tribal, she agrees.

Time for tribal council, Sele is up first. Parvati says that she just wants to work with people who are fun to work with, she doesn’t want to work with someone who is constantly going to backstab. Wendell says he is just trying to keep it real, but he will do what he has to do, to stay in the game. Paravati says he has been difficult to have a real conversation with Wendell. Parvati lets slip that Wendell said that he would give her a vote for a couple of tokens. Wendell says nobody knows what the tokens mean, so he sees nothing wrong with making a deal with her. Parvati asks Wendell if it is a current deal, he says yes. She asks him for a name, he wants her to give a name.

Then, Parvati says she can’t do this because he doesn’t trust her. Yul says they have a plan, but all this talk is making him nervous. Nick reminds everyone that this is a game and somebody is going to be backstabbed, and if they don’t do it, someone will do it to them. Time to read the votes, first vote Parvati, then Wendell, Wendell, Parvati, Parvati. Parvati is the seventh person voted out and heading to Edge of Extinction. Parvati bequeaths her fire tokens, she has two, to Michelle.

Time for the next tribe, Dakal, to have their tribal council. Denise says they are all threats in the game for different reasons. Jeremy says he loves Denise, but they want to be strong so they don’t end up here again. Denise says she is not the biggest challenge beast, but she offers up different things. Jeremy says he is really nervous, he is usually a duck on water, now he is a duck upside down. Sandra says you have to exploit any power you have, it is either them or you. Time to vote. Denise plays her immunity idol, tells Jeff that she hopes it settles her stomach. Jeff says it is a real idol. Denise plays a second immunity idol, this one is for Jeremy. The first vote is for Denise, then Denise, Denise, Denise, Sandra. Oh wow, Denise back-stabbed Sandra. Day 16 got Sandra again. Denise says she is going to throw up. Sandra bequeaths her fire token to Yul.