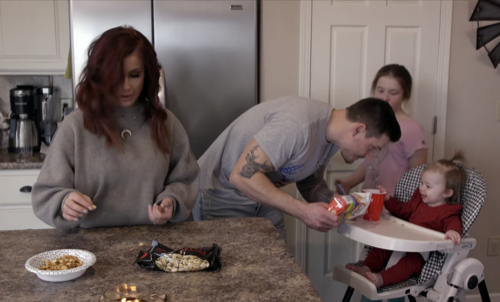 Tonight on MTV Teen Mom 2 returns with an all-new Tuesday, December 22, 2020, episode and we have your Teen Mom 2 recap below. On tonight’s Teen Mom 2 Season 10 episode 17, “Just Don’t Sink It,” as per the MTV synopsis, “Leah steps in when tensions between the twins boil over. Kailyn is forced to navigate the fallout of strong statements she made about Javi. Jade attempts to rebuild a positive co-parenting relationship with Sean.”

Sean moved out. It was the best thing for everyone. He and Jade were constantly fighting and it wasn’t a healthy environment to raise their daughter Kloie in. Kloie deserved better. Plus, Jade deserved better as well. She’s running her own business now and she didn’t have time for Sean’s shenanigans because if it wasn’t drugs it was something else with him. Sean brings the drama.

He started it with her parents when they were all living together and here he was doing it again with Jade. He also didn’t just leave the house. He told their toddler daughter that he had to leave which confused her. Kloie doesn’t understand what’s going on. She probably wouldn’t have questioned him not being around as much because its not like he’s the chief caretaker.

Jade remains the primary caretaker. She takes care of their daughter and she doesn’t disappear whenever she wants or disappears because she’s using drugs. That was Sean. Sean has a pattern of disappearing. He moves in for a little while and then he has to move back out again because he’s done something or he’s broken up with Jade. Their relationship stay off and on.

The break they’re on now isn’t new to them and Jade isn’t heartbroken. She went back to work literally right afterwards. She was ordering product as Sean was finding a new place to sleep. The couple will most likely get back together after some time has passed and so this was far from the end for them. Chelsea at least didn’t have to worry about this.

Chelsea has other problems. Like the anxiety her younger children cause when they demand something special to snack on in the car and so Chelsea’s husband to pull over at a gas station to find something “special”. It was unfortunate that something special didn’t mean a bag of Oreos. It turns out it was a more of a guessing game for adults and all hell will rise up if they don’t get it right.

But thankfully Chelsea doesn’t have to deal with the stress on her own. She gets to share it with her husband and her new pregnancy came as both good news and bad news. It was bad news in the sense that the world had changed because of the coronavirus and so they weren’t sure now was the best time to bring another child in the world, but they do love each other and they love this new baby as well.

The couple also were going to be moving soon. They were supposed to be filming it and there was a slight problem because the kids hadn’t been tested. Chelsea doesn’t want to potentially traumatize them with frequent testing because her children hasn’t reacted well last time. So, for her and her family, this meant the kids couldn’t be a part of filming.

They had to sit out with their dad while Chelsea talked to the producers and meanwhile it wasn’t long before Sean and Jade began talking again. Jade agreed to meet up with Sean because he told her that he was going to be working on himself and he wants to accept help and so why wasn’t their meeting about that. It was instead about Jade.

Jade apparently made Sean feel like a puppet when she began dictating to him what he should do as a stay-at-home parent. Sean also told her that he regretted becoming a stay-at-home parent because he didn’t get to do what he wanted to do and so once again it was excuses with him. He didn’t reveal in the slightest what he’s been doing to improve himself.

He didn’t even talk about himself if it wasn’t to complain about how Jade has been treating him and so what was really going on. What work did he do on himself? Sean didn’t move back in. The most that happened was that he was allowed to watch Kloie again while Jade was at work and so Kloie never came to suspect something was wrong. She didn’t know about the break her parents were on. Nor would she have understood it.

Leah co-parents with both of her exes. She turns to them when she needs help and she was fortunate that both of her exes are great fathers. Only Leah needs more help now with her twins. Her daughters Ali and Aleeah were twins and one of them has a condition that affects her muscles. Ali was the one with the frequent doctor appointments. She has to be more careful than everyone because of her condition and so she was e-learning.

She was going to classes online. Her sister on the other hand was going to in-school classes and, while Aleeah was happy for her break from both Ali and their younger sister Addie, it seems to have caused issues as well. Ali is jealous of her sister for getting to see her friends and Aleeah didn’t really understand her sister’s condition. She thought it was laziness.

Leah noticed that there was tension between the twins, but she didn’t know why this tension was there and neither of her daughters were willing to open up about it. They were being close-mouthed about their problems. They also gave their mother attitude whenever she pushed them. Briana’s two daughters get along very well. They weren’t twins only Nova took her duty as a big sister very seriously.

Briana’s problem was not her daughters’ relationship with each other. No, her problem was her Devoin because he was Nova’s father and he was screwing up at the bare minimum. He just needed to pick up his daughter from school and take her to gymnastics. That’s all he has to do, so why was he picking her up late which means she doesn’t have time to do her homework or eat before she has to get to gymnastics.

Devoin stays running late. He gives his daughter anxiety because she was the last person to be picked up and she starts to wonders why she isn’t his priority. And Kailyn realized it was a mistake to talk about her ex on camera because she revealed he tried to have sex with her and he was currently in a relationship with someone else.

The other woman had actually wanted to talk to Kailyn and so she had to stop filming because she was having an anxiety attack of her own.

And Sean came to watch Kloie one day, but he was late and so Jade didn’t want to deal with him and he ended up breaking one of her windows.