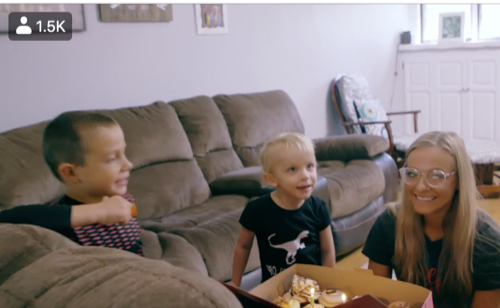 Tonight on MTV Teen Mom OG returns with an all-new Tuesday, April 7, 2020, episode and we have your Teen Mom 2 recap below. On tonight’s Teen Mom 2 Season 9 episode 4 as per the MTV synopsis, “Gary takes Amber to anger management class after audio is leaked from a dispute; Catelynn visits her psychiatrist after listening to the audio leaks, and Cheyenne decides to start an event planning business.”

Teen Mom 2 should be another episode filled with crazy drama. So make sure to bookmark this spot and come back for our Teen Mom OG recap tonight from 9 PM – 10 PM ET! While you wait, don’t forget to check out all our Teen Mom 2 recaps, spoilers, news & More, right here.

Amber is going through a lot with her criminal and custody case. She’s been doing her best to keep fighting and she took a hit after her ex released several audiotapes. Andrew released tapes of her losing her temper. Amber was heard threating him and she was calling him names. She had really lost it. She wasn’t in control of herself and so Andrew recorded her at the worst possible moment. He revealed the worst parts of her nature to the world. Amber was going to have to explain herself now because her friends are questioning her behavior and these tapes were bound to get back to the judges in her cases.

Amber reached out to loved ones. She called Catelynn and she asked that their conversations not be shown for the show. Amber even reached out to Gary. Gary has been there for her as much as he could and he’s heard the tapes. He knows how much trouble she’s in now and he wants to help her. Amber’s friends and family were doing their best to be there for her, but they also had their own lives to work through. Mackenzie celebrated a birthday. Her husband bought her several cupcakes and he got her a gift. He got her a bible. It was the first birthday present he’s ever bought her and she loved it.

Mackenzie and Josh were doing better since they went on that couple’s retreat. The retreat helped them remember the good parts and so they were looking towards the future with some optimism. Maci meanwhile was trying to do the best for her son. Her son’s birthday was coming up and she wanted to invite his dad to his birthday party. Maci thought it was time to leave the past in the past. She was willing to invite Ryan because she knows that’s what was best for their son and so she cleared it with Ryan’s family. She talked to them instead of directly reaching out to Ryan because the protection order is still in place and so that was another thing she had to think about.

She had to wonder if it was best for her family to keep the protection order up. Ryan had threatened her husband and that’s why they got the order of protection against him, but it been a while since then and Maci had to think about what was best for Bentley. She was doing that as Cheyenne went ahead with her charitable endeavors. Cheyenne had a successful fundraiser the other day. She raised thousands of dollars for VLCAD and so she wanted to do more. She was thinking of other ways to raise money when her living situation with Matt became difficult. Cheyenne admitted that it was hard on them now that he didn’t have his own place.

He was supposed to be staying with her temporarily. Only their living situation was getting to be hard and so Cheyenne was doing her best to bury the problem. She was focusing on her charitable work. She was also trying to get her event planning business off the ground. Cheyenne talked it through with her friend Remy and her mother. Her mother told her how she needed to aim for business contacts because she could always put together events for them and so Cheyenne was being very serious about her latest venture. It helps that she could drop her daughter off with Cory and so hopefully Cory won’t take that offer to be on the newest season of “the Challenge”.

He was on the show two years ago. He had been asked to leave after getting into a fight and so he’s matured since then. Cory believes he’s a different man now. He thinks if he goes back on the show that he’ll have a different experience and he’s talked about it with his dad. Now, he just needs to talk about it with Cheyenne. Cheyenne needs to know his plans and the exes have to be on the same page. Like Gary and Amber. Gary was paying attention to the problem. Gary talked to Amber about her mental health. He even booked her an appointment to see someone because he wanted to be sure that she was okay.

Catelynn booked an appointment for herself as well. She had felt triggered after listening to the Amber tapes. It had reminded her of when she was growing up and her mother kept getting into fights with her boyfriend. Catelynn felt for Amber’s baby who had to witness the fight. She had needed to talk through her emotions with her doctor and unfortunately, she also had to deal with trolls online. There were people that coming down on her for supporting Amber. They claimed she was a horrible person for doing so and so Catelynn had to start blocking people. She also talked it through with her husband and he supports her decision to stand by Amber.

They’ve known Amber for over ten years. She was a friend of the family and Catelynn still wants to support her. Tapes or no! Amber was a mother who was struggling. She went to go see a doctor and she had fainted on the way there. The ambulance had needed to be called. The EMTs needed to check out Amber and they’ll help her get back on her feet. She also had her friends there to help. Catelynn wasn’t alone is supporting Amber. She had her husband’s support and Maci was there for Amber as well. Maci recently had talked to her son’s stepmother and that side of the family posed some questions about Bentley’s birthday party.

Maci’s ex Ryan had wanted to know if he would be in legal trouble if he showed. He also didn’t want to be filmed because he didn’t want that captured on tape or used against him in court and Ryan still claims that the restraining order was made on a lie. He said Maci and her husband lied about him. He seems to be upset about it. He complained to his parents and they kept trying to tell him to just be there for Bentley. And so he snapped at his parents.

And Mackenzie went on a birthday field trip that her husband put together and it ended in her receiving roses directly from him.