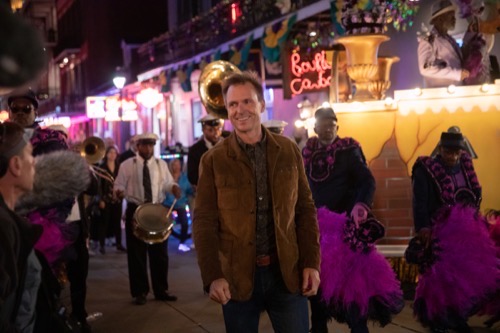 Tonight the CBS series The Amazing Race airs with an all-new Wednesday, December 16, 2020, season 32 episode 12 and we have your The Amazing Race recap below. In tonight’s season, 32 episode 12 called, “Now It’s About Winning” as per the CBS synopsis, “With the $1 million prize on the line, the final three teams travel to New Orleans where, after visiting 11 countries, 17 cities and travelling more than 33,000 miles, one team will be crowned the champion.”

Tonight it is down to three teams; Hung & Chee, Will & James or Riley & Maddison. Who will win the one million dollars and the Amazing Race. Teams are leaving Manila, Philippines and it’s all about winning. The final three teams will complete their race around the world flying east across the pacific ocean to New Orleans, Louisiana. There is a party on Bourbon Street and they are going to celebrate with the final three who must make their way there.

The teams land and come running out of the airport to grab a taxi and make it to Louis Armstrong park. Will & James are the first team to arrive and get their next clue. Teams must collect beaded necklaces at the party, 50 gold and 50 red like the grand marshal to get their next clue. Meanwhile, Riley & Madison are lost. Will & James are with the grand marshal and already collecting the necklaces. Hung & Chee are also collecting the necklaces while Riley & Maddison are still lost. Teams realize that they need to get the big beads and not the small ones, so they need to collect more.

Will & James are the first team to finish and get their next clue, it is a roadblock, “who will be left holding the baby.” Teams will have to search through king cakes to find the miniature baby and their next clue. Riley & Maddison are in last place. Will is the first person to find the baby, and trough his search he does eat some king cake.

Next, Will & James have to eat beignets, a half dozen. It’s like a big powdered donut. The two are trying to do it as fast as possible but it is tough. They drink water to try and get it down. Meanwhile Chee I on his second rack, he is going as fast as he can. Will is actually gagging and James is frustrated. But in the end, the two do it. Next, teams have to travel to the New Orleans convention center and search for their next clue. Hung sees the baby on the table, but she can’t say anything to Chee.

Will & James find a taxi real quick and get their next clue. It’s another roadblock, “who wants to take a swing at this roadblock?” If they did the last roadblock, the other team member will have to do this one. In “who wants to bridge the gap?” teams must climb under the bridge, climb out to an enormous beam and leap out into the pitch dark to grab their next clue, almost two hundred feet above the dark imposing Mississippi river.

Chee finally found the baby, he missed it from the beginning and didn’t notice it until he tracked all the way back through all the cakes. They are eating the beignets now. Meanwhile, James is strapped in, he hates heights and the dark just makes it worse. James says the feeling was like a really long drop from a roller coaster. James is finished, he and Will must now propel down one hundred and eighty feet to the ground.

Teams must then make their way to Mardi Gras World rolling a ten foot high ball down the street. Teams started with a party in Trinidad, and will now let the good times roll in Louisiana. The three hundred square foot warehouse is where they have to go.

Will & James are propelling down, they are trying not to look down. Once there, they find their ball and have to figure out how to get it out of the large crate. Hung & Chee have arrived at the bridge, and are not giving up.

Once in the warehouse, they must search through thousands of Mardi Gras decorations for a crate containing thirty two pieces of a giant globe puzzle, which they must correctly put on their balls and create a globe of the world to get their next clue. Will & James practiced their geography before going on the race.

Hung & Chee are rolling their ball down the street while Riley & Maddison are finally arrived at the bridge. The Mardi Gras World owner checks Will & James’ ball, it is not correct and they are worried, they had such a strong lead.

Will & James are finally done and now must make their way to the final destination, the New Orleans Superdome. The first time to find Phil there will win one million dollars and be the winners of The Amazing Race.

Will & James are the winners. Eleven countries, thirty three thousand miles and they have won the Amazing Race. Hung & Chee are team number two, with Riley & Maddison coming third.