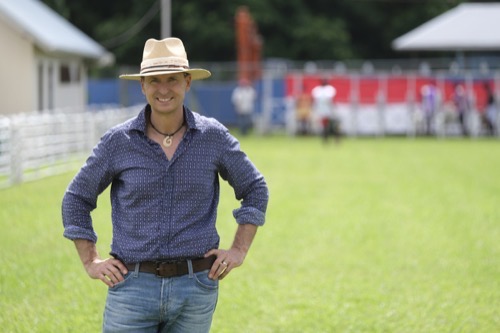 Tonight the CBS series The Amazing Race airs with an all-new Wednesday, October 14, 2020, season 32 episode 1 and we have your The Amazing Race recap below. On tonight’s season, 32 episode 1 premiere called, “One Million Miles” as per the CBS synopsis, “The 32nd race kicks off from the Hollywood Bowl in Los Angeles.”

Amazing Race is back for its thirty-second season with Phil Keoghan informing us this season of the race took place before COVID-19. After a recap of some of the most memorable moments of the series’ history, we are introduced to some of the new teams. NFL stars DeAngelo & Gary, Will & James, sisters Michelle & Victoria, volleyball players Riley & Maddison, father and son Jerry & Frank, Leo & Alana, best friends Nathan & Cody, sisters Kaylynn & Haley, married Chee & Hung, siblings Eswar & Aparna, and Olympic hurdlers Kellie & LaVonne.

The teams land at the airport at Piarco International Airport at 9:00 pm and are trying to find a taxi. Jerry & Frank are happy to be on the race together, his father had a busy sports career and didn’t spend much time with his son. Michelle & Victoria are sisters and they were born and raised in Louisiana. Kaylynn & Hayley are also sisters. Riley & Maddison are currently in the first place, Hung & Chee in second.

Teams must pick up a pair of oil drums that are used to make steel pans, then role them a quarter of a mile down the uneven streets of Trinidad in “Let The Good Times Roll,” through a Saturday night street Party and comb through a crowd of hundreds of people to find the Midnight Robber who will give them a ticket for a flight to Tobago. Hung is having a hard tie rolling the oil drum, but she is competitive and not giving up.

The first seven teams arrive from the first flight. Will & James are in the first place, they have to travel by boat to Nylon Pool, legend says that swimming there will give them everlasting youth. Teams have to search through 125 painted fish underwater scattered over an area the size of a football field, they are looking for a fish with unique color combinations on both fins that matches the one from the fish on their boat. They then have to remember the code on their boat to unlock the magic fish in the water.

The second flight has arrived, teams are scrambling to catch up. Teams are in the water and some are not cluing into the fact that they need the number on the fish on their boat to open the combination.

Next is a Roadblock and it’s a steel pan, Trinidad, and Tobago’s national instrument and the only acoustic instrument invented in the 20th century. Teams must learn to place a piece of this song,

Day-O. If the teams can hit the right note and stay on time, they will end the Roadblock on a high note. Meanwhile, Kellie & LaVonne are the last teams to finish the fish challenge. Hung & Chee are in the first place, after just one try. Teams must head to the Pit Stop at Buccoo Integrated Facility where they do goat racing, they have to hold on to a goat a race down to the Pit Stop where Phil is located. Michelle is furious that she didn’t complete the steel pan on the first try and is now in second place, she apologizes to Victoria.

Gary is on his eighth attempt at the steel pan and unfortunately has no rhythm and can’t carry a tune. Gary finally does it, he and DeAngelo are on their way to the Pit Stop. Kellie and LaVonne are not far behind. Nathan & Cody are the last to leave the steel pans. Eswar & Aparna are in seventh place, Kaylynn & Haley are in eight places, Kellie & LaVonna are teams are in ninth place, DeAngelo & Gary are in tenth place. The final team to arrive is Nathan & Cody, and they have been eliminated from the race.