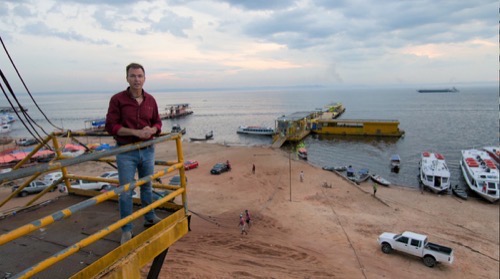 Tonight the CBS series The Amazing Race airs with an all-new Wednesday, October 21, 2020, season 32 episode 2 and we have your The Amazing Race recap below. In tonight’s season, 32 episode 3 called, “We’re Makin’ Big Moves” as per the CBS synopsis, “Teams are in Manaus, Brazil, where they have big decisions to make when they encounter the first U-turn of the race.”

The teams arrive in Manaus, Brazil, and the scramble to get a taxi and head to Manaus Market, they are looking for a box numbered thirteen. The top five teams have gotten closer and they are helping each other in the game. Eswar & Aparna are the first team to find it. They have to search the market and purchase all the items on the enclosed list. The eleven items on the list are all written in Portuguese. When the dock manager confirms they have all the items, they will get their next clue. Michelle & Victoria, Jerry & Frank are all confused, they think number 13 is on one of the boats down by the water. Michelle & Victoria are in last place. One of the items they have to pick up is a machete and it has no protection.

Will & James are in first place and get their next clue. Teams must proceed to Dessana Village, chief of the tribe there will use a blowgun to help the teams get their next clue. Hung & Chee are in second place, but they don’t read the clue properly and leave their items behind. Will & James notice that they don’t have their machete and return to the dock manager to get it.

Now, Will & James lost their fish, so they return and get that as well. Hung & Chee are not the only team to leave the items behind, a lot of teams didn’t read the clue properly. Riley & Madison are now in first place, and they have their bag of items. Hung & Chee are back for their things, but when they get there, they notice some are gone and have to go back to the market to get them again. Jerry & Frank make a mistake, they get a wooden machete and have to return to the market to get a real one.

Riley & Madison arrive at the village and the chief gets them their next clue, it’s a detour and they must choose between Shelter From Trees where they have to carry a bundle to the chief’s new house and then cover a section of his new roof, or Well Done Please where they have to use the items from the market to prepare a meal and when it meets the standards of the high chief they will get their next clue.

DeAngelo & Gary wait a half-hour inside the boat and then signal to Michelle & Victoria in another boat that they need their bag. The girls turn around their boat and head back to get their things. Meanwhile, the girls try to signal Jerry & Frank but they don’t understand and head all the way to the village to find out that they have to go back for their bag.

Kaylynn & Haley have a favor to owe to Leo & Alana, so they U-turn Jerry & Frank to give them a fighting chance to stay in the game. Team after team arrive at the pit stop while Jerry & Frank have finally arrived at the beach. Michelle & Victoria are mixed up again, they can’t find their next clue and wander around on the beach. Jerry & Frank start by cooking, they don’t know that they will have to do both. Michelle & Victoria are in 7th place, they finally found their clue. Jerry & Frank find out that they are U-turned. Leo & Alana are in 8th place and don’t plan on asking Will & James why they did it.

Jerry & Frank finish up, they are the last team to arrive and have been eliminated from the race.