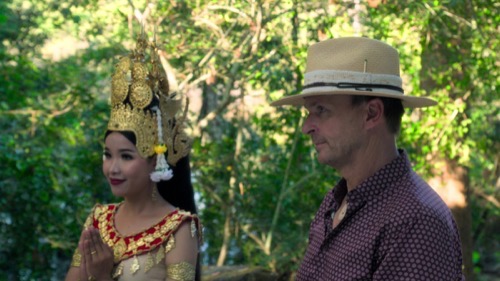 Tonight, the five couple alliance is over and the competition is heating up. Riley & Maddison are the first teams to leave India and fly more than 3000 miles to Siem Reap Cambodia. Almost 100% of the population practice Buddhism, and strive for spiritual enlightenment. This is also where the teams meet up with their traveling companion for this leg of the race, the Travelocity gnome who has everything they need for their next clue. Everyone was on the first flight, the plan is for the teams to yield DeAngelo & Gary. Will & James are in second place, DeAngelo & Gary in third, Hung & Chee in fourth. Eswar & Aparna are the last teams, they have yet to win a leg and don’t plan on using the yield.

Teams must help a driver fix their tuk-tuk and head to the pier to get their next clue. Eswar & Aparna are still in the last place. Riley & Maddison arrive at the pier first, teams must now travel by boat to a village, a fully functional community on water, and visit a floating Buddhist temple, give them their basket of goods to get their next clue. Teams are pretty much one after the other, it still is anybody’s race. Riley & Madison take the first, and what they believe is the fastest boat, and partway there, it breaks down.

All of a sudden, the motor starts, they are on their way again. Hung & Chee are the first to arrive and get their next clue. It’s a Detour, in Fish teams must haul in a net that measures half a mile long, then with the assistance of the Travelocity gnome, they must gather at least 15 kilos of fish to receive their next clue. In Farm, teams will have the detailed task of mixing soil and planting local produce to replicate a Cambodian garden.

Hung & Chee are doing the garden with Will & James, the rest of the teams are fishing. Eswar & Aparna are still in the last place. Riley & Maddison are about halfway through the fishing, meanwhile planting is proving to be tedious with the heat. Riley & Maddison do it, they are done and heading to a Double U-Turn which will undoubtedly be a game-changer.

Will & James, DeAngelo & Gary both arrive at the next clue together and DeAngelo & Gary decide to U-Turn Eswar & Aparna. Teams must take the boat back to the pier and head to Khmer Floor Handicraft where they will receive their next clue. Eswar & Aparna find out that they are U-Turned and think it is probably game over for them. Meanwhile, Will & James U-Turn DeAngelo & Gary, even though they are technically ahead of them, they just want to burn the Double U-Turn so nobody else can use it.

Hung & Chee are done planting and are on their way, Will & James are a little behind them. They find out that Will & James burned the U-Turn. Eswar & Aparna are now planting.

Maddison & Riley are in the first place and arrive at the Detour, “who thinks they can fit the mold?’ Teams must learn the delicate process of making hand made tile by following the steps of a local artisan. Removing the tile from the mold without breaking it takes a tremendous amount of skill. If they are successful, the Travelocity gnome will give them a key to a box that contains tile puzzle pieces to solve a spy puzzle. This is where teams can catch up be because if you don’t watch the artisan, you are not going to be able to do it properly.

Riley & Massison finish first, they head to the Pit Stop at Angkor Thom, the last team to check-in will be eliminated. Riley & Madison make it to the Pit Stop and are still the first team, they win a trip for two to Norway. Will & James are team number two. Eswar & Aparna arrive at the tiles, two other teams are there and they couldn’t be happier. Hung & Chee are in third place. De Angelo & Gary are team number four. Eswar & Aparna are the last teams to arrive and have been eliminated from the race.