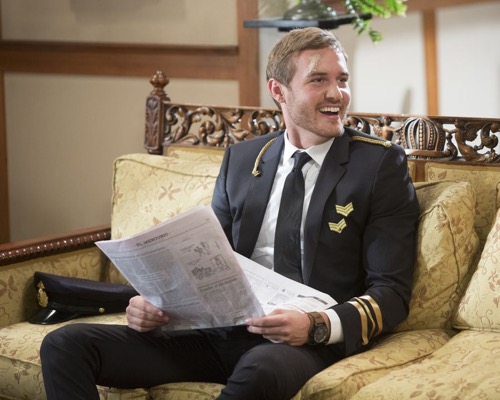 The Bachelor 2020 airs on ABC this evening with an all-new Monday, February 05, 2020, season 24 episode 6 and we have your The Bachelor recap below. On tonight’s The Bachelor season 24 episode 6 as per the ABC synopsis, “Peter needs to concentrate on his developing relationships in Santiago, the vibrant capital of Chile. But his first date raises serious concerns when she reveals she has never been in love before.”

Peter experienced a rough week. There was just so much drama going on behind the scenes and he hadn’t known what to believe. He heard a different version of events every time he turned around. But Peter wanted to put all of that in the past. He was ready to move on with the ten remaining women and he even asked one of them out on a one on one date. He asked out Hannah Anne. He asked her out in front of everyone else and so the other women weren’t happy. They wished they were the ones spending time with him. And some of them felt that Hannah Anne was too young to be ready to get married.

They thought she had a lot of growing up to do! Peter was feeling some of the same because again Hannah Anne is really young. She’s only twenty-three and there were plenty of other things that needed to come along first. Like maturity. The women have been having issues certain childish behavior and, while they agreed to move past it, they did bring up what happened. Two women had a mini-cocktail hour with Peter when no one else had gotten the chance and no one was happy was about it.

One person, in particular, had said going forward that she never wanted to that sort of behavior again. The women were still upset about not receiving their cocktail hour and they all wanted time with Peter. They were jealous of Hannah Anne. Hannah Anne had gone on a date with Peter and surprisingly it hadn’t gone that well. Peter was at first frustrated with her because he felt she kept giving the perfect answer and he never knew what was real with her. He even began to withdraw from her and she sensed that.

Hannah Anne then fought for him. She went after him and she admitted that she wasn’t being herself. She told him she was falling in love with him. She was so desperate to be liked that she was afraid of doing or saying something wrong and it wasn’t until she confessed to acting differently that Peter began to have hope again. He does have an attraction to Hannah Anne. He thinks there might be something there and so he handed Hannah Anne a rose. He wants to see what it will be like with her now that she’s being herself.

Peter later sent two date cards to the women’s hotel room. The first date card was a group date and included women who didn’t want to be on a group date. Mykenna was one of the women sorely disappointed. She had wanted the solo date and it went to Victoria F. This would be Victoria’s second solo date with Peter and so some of the women thought that was unfair. But the group date wasn’t so bad. They went to a studio where they found out they would be starring in their own telenovela.

They all received roles in the telenovela “El Amor De Pedro”. They all got to laugh as they played outlandish characters and the episode came to an end when Peter ended up with Mykenna. Which was great because Mykenna was looking for a sign. She kept questioning why she was there if he didn’t really notice her and so this telenovela happened at the right time. It eased the tension with everyone. Some of the women even said they wished they were more like their characters and so everyone should be afraid.

Tammy believes she’s a nice person. She’s thrown people under the bus and yet she still believes she’s a nice person. It was so ludicrous. It also got worse. Tammy felt differently after playing a baddie on a telenovela because she said she was going to try and be more like her character. Tammy said she was going to release her inner mean girl. As if she hadn’t been doing that from day one. Tammy said the others better watch out and no one was paying her any mind. They were all focused on spending time with Peter.

Peter was breaking some bad news to some that didn’t deserve it. He told Victoria P. that he doesn’t see her as his future wife and so she chose to go home right then. Victoria didn’t even wait to tell the rest of the women. She just wanted out there and so she left while Peter explained what happened. He told the rest of the women that he sent Victoria home. He said he had to be honest with her and it was the truth. He couldn’t have strung her along. The truth would have gotten out eventually and it would have hurt more if he allowed her to become invested in their relationship. And so Peter did the right thing here.

Peter was also soon making out with someone else before long. He was wrapped up in another woman when both parties began overhearing an argument. The argument was between Tammy and Mykenna. Mykenna was just minding her own business when Tammy came at her for nothing. She accused Mykenna of being immature and not being there for the right reasons, but that wasn’t her place. Tammy doesn’t know Mykenna. She’s also done this before. She came at someone over nothing and she was probably going to follow the same pattern.

She was probably going to tell Peter that Mykenna was the problem. But Mykenna got to him first. She talked to Peter that night and she told him that she doesn’t know why Tammy picked a fight with her. This wasn’t even Tammy’s first fight. Tammy badmouth Kelsey last time and she seems liked she just wanted to eliminate people. Like she’s not really in it for Peter. She just doesn’t want anyone else to have Peter and so both Mykenna and Kelsey pushed back. They refused to let Tammy bully them.

Peter meanwhile went on his next solo date. He went on a date with Victoria F. who was now the only Victoria and a few things were revealed on this date. Victoria mentioned she has doubts. She wavers back and forth over what she feels for him. She’s put her walls up and Peter could see it when she does that. He wants to know if there was anything he could do or say and the more he tries to help is the more she pulls away. She took out her frustrations out on him. She doesn’t know what she wants and she unraveled towards the end as she kept telling everyone “I, don’t know”.

She didn’t know if she wanted to finish dinner with Peter. She didn’t know if she was ready for marriage and so Victoria freaked out a little. She returned to the table later on and by then Peter was so desperate for her to stay that he offered her rose. He breathed a sigh of relief when she accepted it and he must have known that he needed to get his affairs in order. Peter remembered the fight between Tammy and Mykenna and he sent a date card for them. He asked to speak to them alone before the cocktail hour.

Peter had worded it to say “enough is enough”. He was tired of the fighting and he wanted it resolved. Peter chose to speak with Tammy first. Tammy did everything possible to make Mykenna look flighty. She told him how Mykenna had packed a bag before the group date and that the young woman said she couldn’t take it anymore, but Mykenna told him a different version. She admits she was at a low point because she wasn’t sure if they had a future. She also said she was one of the few people reminding everyone to focus on Peter rather than the drama and so Mykenna didn’t know where Tammy was coming from when she said she was all about building a brand.

Tammy accused Mykenna of using the show to make a name for herself. Mykenna doesn’t know where she got that idea and she fought against it. She told Peter that Tammy was toxic and he ended up believing her lover Tammy. Peter later sent Tammy home. It came as a nasty shock to Tammy herself because she thought she had convinced him to eliminate Mykenna and so Tammy badmouth them both in the car. She said Peter was only looking for a trophy wife. She said she would never want to be that and, really, she wanted the world to know she was over Peter.

Tammy tried to save face once she was eliminated. But Peter was quick to move on and he had cocktail hour with the rest of the women. He spoke to them one on one and he did his best to weed out any woman he didn’t see a future with. Peter later handed out roses with a heavy heart. He eliminated two women. He sent both Mykenna and Sydney home and so in a way Tammy still won.