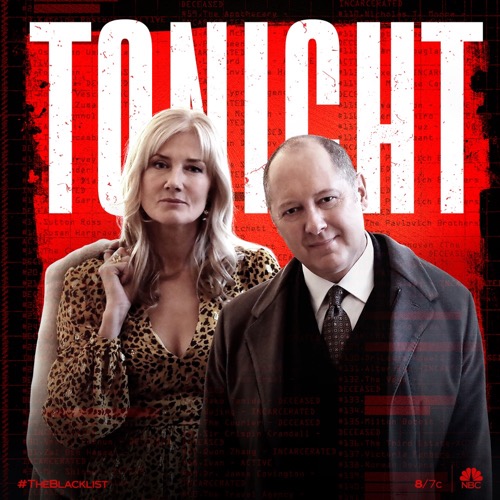 Tonight on NBC their hit drama The Blacklist starring James Spader airs with an all-new Friday, March 27, 2020, episode and we have your The Blacklist recap below. On tonight’s The Blacklist Season 7 episode 12 called, “Cornelius Ruck”,  as per the NBC synopsis, “Secluded on a private island, Red reunites with an old flame and a ring of thieves in a plot to make millions off stolen art. Plans are quickly derailed, however, when guests on the island mysteriously show up dead.”

Red arrives on a private island with Dembe. A storm is brewing, Arthur Rodman greets them on the dock where their plane landed. Arthur tells Red no second is permitted, meaning Dembe can’t stay. Red says it is fine, Dembe worries that the island may not be secure. Arthur assures Dembe that the island is secure. Red walks Dembe out, tells him to read a book and eat a couple of pizzas. They hug, Red tells him not to worry. Red has to give up his firearm, it is put in a locked box with everyone else’s.

Red is driven to the main house, Cassandra Bianchi welcomes Red and kisses him on both cheeks, tells him that she was hoping he came for her. She asks him if he has his piece, he says yes, she says it’s official then, they have the complete set. Arthur shows Red to his room, then he turns around and Annika Logan is there. She says she checked her whole room to make sure it is not bugged. They hug and catch up with each other. Red goes downstairs and Margo is there, then Mahmoud Iqbal walks in. Red detects a chill in the air from the two, Red asks if they are on again or off again, Margo walks away, guess they are off again.

Cassandra walks into the room where everyone is sitting around catching up with each other. She wants to talk about business. It has been just under three years since she went to see Red and told him about the caskets. She says they did the right thing, split it and wait, now it is time to move. There is a collector now interested in this art. Everything was done anonymously, he has no idea who they are, but he is on his way. And weather permitting, he should be there at the same time, the next day. Joko Kozinski is upset, he only has 10% and they all have 18%, he says he is not going to let Cassandra barter a deal for them that will reduce his cut, even more, he knows how to do the math. Red reminds Joko 10% because he came in late, not because they value him any less. Red tells them all to take a breath and remember they are friends.

Everyone puts their caskets on the table, Morgan is the last one and the smallest. Margo passes out in front of everyone. Red goes to her quickly to see if she is ok. Margo is dead, Red and Joko put her in storage and go to cover the body, just as red notices some red scratches on her nails, and she had blood in her mouth and in her nose.

Back in the other room, Annika is upset, she thinks it was a curse. Cassandra tells her to come down. Red walks into the room and tells everyone just to calm down. Joko says she was morbidly obese, it was probably weight-related. Red says it has nothing to do with hypertension or a curse, it is probably someone who gains from her death. Mahmoud says the only one that would gain from her death is Joko, he had a lower percentage. Then Joko says Mahmoud probably killed her because they broke up, maybe he can’t handle her shacking up with somebody new. Red tries to calm everyone down tells them to turn in early, and they will reconvene when they are fresh in the morning.

At 2:00 am, Red knocks on Cassandra’s door. He brings her down to the basement, tells her that Margo had broken blood vessels in her eyes, inside her lips, and under her fingernails. Cassandra says that could mean she was poisoned. Red says they have to open her up to be sure. Red preps her for the autopsy, Cassandra watches and asks him why she hasn’t heard from him since Marseille, she walked away from Marco and thought he would too. He asks her to pass him towels.

After Marseille, she got a job in Lisbon. He says he walked away because she took the money, she says she took the money because he walked away. Red continues digging inside of Margo, tells Cassandra to tell him about Lisbon. She says that that she was working for a museum and lost her entire investment. He asks her why she brought it up, she says she has a lot of bad luck lately. She says she would go back to that sweet time she spent with him. Red determines that someone on the island killed Margo, she did not die from natural causes.

Red tells Mahmoud and Annika that Margo was killed, someone used an anti-coagulant. Cassandra says that it appears it was ingested. Cassandra turns to Mahmoud and says she saw him having breakfast with her. Mahmoud grabs the fire iron and goes to look for Joko, who did not join them downstairs. He doesn’t answer, Red forces the door open with the fire iron and finds a dead Joko with his fingers amputated. Red says he wasn’t killed for the treasure, his casket is in the room. Annika has packed up, she says she doesn’t want the money, she turns to Red and tells him that if he were smart he would leave too. Mahmoud is in the kitchen, he kicks open a vent in a pantry and looks like he set a bomb.

Red hears the blast and goes to follow Mahmoud, he notices the chest with the weapons is open. Annika is outside, she runs to the dock and looks inside a building for someone to get her help to get off the island. Cassandra arrives at the door and runs to her, Annika starts coughing and Mahmoud storms in with a gun, he shouts at Cassandra and accuses her of now poisoning Annika. Red comes in from the other side, with a gun, and tells Mahmoud to lower the weapon. Red has to shoot Mahmoud. Annika dies in Cassandra’s arms, Red says to Cassandra she was right, he has no reason to believe her about Marseilles or about this.

Cassandra and Red are in a car, she talks about a potential buyer who was an FBI agent, who arrested her for theft, she made a deal. They wanted the caskets, but she didn’t give them their names. The Turks knew the agent had a list of their assets inside their country, they killed him for it, but didn’t get the list. He had already hidden it as a microdot, on one of the caskets. The CIA wants it back to protect the names of their undercover agents. Red says they lied to her, they weren’t CIA agents and he won’t know why until they read the microdot.

Red makes a microscope out of binoculars, he tells Cassandra that he misjudged her, he should have known that she could not have killed all those people. She says she wanted to run away with him, he didn’t. He says he had obligations, someone was in jeopardy and he had to intervene. She says maybe he no longer has obligations, he says only to watch her daughter dance tomorrow night. Cassandra gives Red the caskets, he tells her he really needs tape to secure the lense. She walks away to find some and finds more dead bodies, it’s the island staff, the Turks got there before they did. All of a sudden a man walks into the building with a gun, he doesn’t see Red who grabs his weapon.

Red asks who he is and why he is there, then says his guess is that he is a Turkish operative. The man won’t say anything. Red threatens to kill the man, he says he is looking for the smallest casket. Bingo, that is the one, Red can see the names, but it is a list of Turkey assets in America. The man, Ahkmen, has a radio, Red takes it and hits him over the head with the gun to knock him out. Red says hello to the person on the radio, it is Arthur Rodman. Great Red says, the butler did it. Red says he is Cornelius Ruck, of course, they hired him to find the list. Cassandra says they have it and are taking it when they leave the island. Red says they are not surrendering, wish them luck. Cassandra kisses Red and she tells him they should definitely leave with the caskets.

Arthur has about a dozen men, against Red and Cassandra. First thing, the duo cuts the power to the house, Cassandra is seen pouring something all over the driveway. Red enters the house and starts shooting them one by one. Cassandra is also inside, she is staying close to Red. Then Cassandra lights the fire where she poured gasoline and one of the men goes up in flames. Arthur catches Red, he radios Cassandra to bring him his caskets or he is putting a bullet in Red’s head.

Cassandra comes into the house and gives him the caskets. Red asks what now. Arthur says he gets rich and they die. Red says anytime would be good, like now. All of a sudden, Cassandra triggers something in her pocket, and a blast goes off in the room. Arthur is hurt, but he manages to grab a gun, Red distracts him and stabs him. Red looks out the window and tells Cassandra it stopped snowing, the two hug and kiss.

Red and Cassandra bring the caskets to Cynthia, she is shocked that they are authentic. She gives Red a piece of paper with a number on it. He tells Cassandra that it calls for a celebration, perhaps in France.

Cassandra and Red, along with Dembe close by, attend the recital. Red asks Cassandra if she is ready, she says yes, to say goodbye. He may have come into her life for obligation, but he needs to stay for love. Cassandra kisses Red and leaves. Elizabeth sees him and looks happy that he is there. She tells him that she knows she deserves more after Tom, but so does he.

She then says they may not have bigger lives, but they have each other.