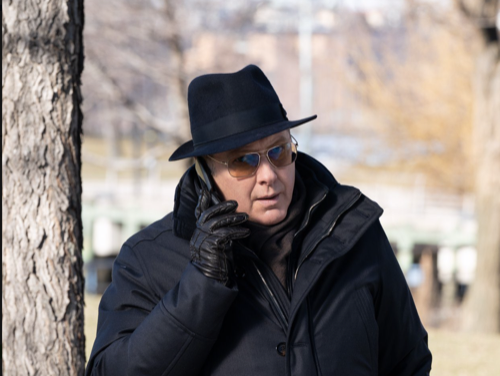 Tonight on NBC their hit drama The Blacklist starring James Spader airs with an all-new Friday, April 3, 2020, episode and we have your The Blacklist recap below. On tonight’s The Blacklist Season 7 episode 13 called, “Newton Purcell”,  as per the NBC synopsis, “The Task Force investigates a series of attacks on data centers perpetrated by a blacklister with a peculiar condition, as Liz conducts a secret investigation on the side. Meanwhile, Glen desperately tries to prove his value to Red after a shipping mishap.”

We see a man digging up something, it looks like some kind of electrical unit inside a pox. The same man shows up at Optimus Data Control to fix the power, the generator is working but won’t last long to keep the servers going. Once the man is inside the server room, he transfers files from the computer and sets explosives. The man is safely outside the building when the blast goes off, he leaves.

Aram is in a plane with gear on to go skydiving with Elodie. They jump together and all you can hear is Aram’s screams.

Red is on the phone with Glen, Red says he will be there within the hour. Red is with Liz and tells her about the attack at Optimus, it is the second one in weeks. The FBI is assuming they were attacked by foreigners looking for intel. Red says his sources have ruled out foreigners, he thinks it is domestic and they won’t stop until they get what they want.

Liz meets with the task force and updates them on Optimus. Three people died in the recent blast. Liz tells them that Red thinks it is a domestic threat.

Annapolis, MD. The same man who bombed Optimus is helping a man jump his car when he smashes the hood on his head.

Red is with Glen who tells him about a shipment that went wrong. Glen says he can go to Straton to get the truck. Red says that truck is not just a truck, it is a test balloon carrying equipment valued at over twelve million dollars. If this goes south, things will go bad for everything, especially Glen. Glen says he is on it and will make sure he gets the truck. Then he asks Red if can fly business class for his back, Red tells him that he has two days.

Aram looks to Liz for advice on Elodie, she tells him that if he is meant to be with someone all that matters is that he is.

Red is with his client, Glen calls him and tells him that the truck is not for sale, it is being given away in a contest.

It turns out the man who bombed Optimus’s name is Newton Purcell.

The man who Newton hit on the head with the hood of his car, now has him in a vat of water and sound waves running through it. Newton pushes the frequency to high to make the man suffer.

Ressler meets with the task force, they found a Culpepper van abandoned in an alley, with a body inside, it is the man that Newton killed with the soundwaves. The victim was a West Lake City council member, he served three terms before opening a consulting business. Besides the van connecting the van to Healey, there are payments from Optimus to Healey and Libby Bishop, she is another council member.

Libby gets a knock on her door, a man is looking for his dog. She goes out back to help him when there is a call on her cell phone from Park who tells her to scream and yell they are five minutes away. Too late, Ressler and Park arrive and Libby is gone and the backdoor is smashed in.

Aram goes to see Elodie, she tells him that she has been selfish, this is her burden and not his; she can’t give him the one he wants. Aram tells her that he thinks too much, he needs to stop thinking and just feel. She tells him to look around, they are at the hospital, her husband has been admitted again. The doctor comes out and tells Elodie that there has been a complication, a brain hemorrhage, her husband is dead. Elodie starts to cry and Aram hugs her, she says she didn’t even get a chance to say goodbye.

Red calls Glen and asks him what is going on. Red says the place is crawling with cops. Glen says one of the participants in the contest is a cop, that is why. Glen’s solution to get the truck back is to win the contestant.

Liz walks into Cooper’s office and tells him that Elodie’s husband died, Cooper says he is sorry. Ressler says maybe he shouldn’t be sorry to someone who is dating a married woman and her husband dies.

When Libby was attacked, she pulled out Newton’s hearing aid. Liz finds the hearing aid and goes with Park to see the doctor who made it, so they can figure out who took Libby. This hearing aid was a little different, this one blocked out sound. The doctor gives them the name of the man, Newton Purcell. Meanwhile, Newton already has Libby in the water tank.

Red is with his clients and asks to change the timeline again. Red tells them he has his top man on the job, someone he trusts and would go into battle with, anytime, anywhere. If there is a man who can get his shipment, it is Glen. Dembe tells Red those are powerful words, he wishes he believed them.

Newton tells Libby that from working at Optimus he has a humming in his ears and turned him into a bad person. Libby says she opened up a new factory because it was going to bring jobs to the city, she didn’t know about the sound pollution. Newton increases the sound waves on Libby when he sees Liz at his door. Liz breaks in, Park as well. Liz radios Park to cut the power. Libby is still alive. Park is looking around for Newton when he grabs her. She manages to get loose and knock his other hearing aid out of his ear. She wraps a rope around his neck almost kills him if it weren’t for Liz who she shouts at to let the rope go.

Glen is still holding on, albeit he is about to fall asleep. Thankfully it is break time, it is just Glen and a priest who are against each other. The priest goes to the restroom, Red is in there and tells him about the pain that Glen is in. Red suggests that if Glen wins, he would be so happy and since the priest has already won twice, he wouldn’t mind losing. Red bribes him with a Mercedes. The priest tells Red to let him play on it.

Park and Liz question Newton to find out why he killed Healey and abducted Libby. He says that sound pollution took so much away from him, he killed Healey because he wanted it to stop. Outside the room, Liz tells Park that she crossed the line.

At the funeral, Aram is greeting people and being there to supports Elodie. Liz calls to see how he is, he says shockingly calm. He says he likes Elodie because she feels. Aram is downstairs and sees Elodie’s prenup. If she left her husband she would have received nothing, if he dies, she receives 10 million dollars from the estate.

Red is waiting with his client for Glen, who shows up with the truck. Red tells him that he started to doubt him. Red congratulates Glen on getting the job done. Glen asks about his truck, and then says it doesn’t matter, he got the job done and Red’s faith is worth more. Dembe shows up in a beautiful red sportscar, Red tells him that it is his payment, Glen is thrilled and calls himself the eye of the tiger.

Liz meets with a private detective.