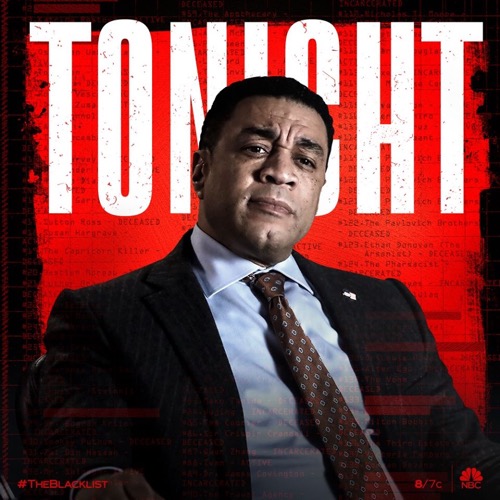 Tonight on NBC their hit drama The Blacklist starring James Spader airs with an all-new Friday, April 17, 2020, episode and we have your The Blacklist recap below. On tonight’s The Blacklist Season 7 episode 15 called, “Gordon Kemp”,  as per the NBC synopsis, “A blacklist case forces Liz to choose sides between Red and the Task Force. Meanwhile, Red tries to calm a panicked Ilya Koslov, (guest star Brett Cullen) who believes he is under surveillance.”

Red is with Dembe, he stops in a convenience store to buy a big bag of ice. The clerk is texting to someone and she smiles, Red asks her what it is and she says she was just accepted to college. He congratulates her and goes to get the ice. He tells Dembe they should buy her something to celebrate. She calls her mother to tell her, while she is on the phone a man comes in with a gun and holds her up. The Alarm goes off, he shoots the girl dead, Red and Dembe shoot him dead. Dembe grabs the surveillance video and tells Red they have to go. Red grabs the dead man’s wallet first, his name is Edward Martel.

Ilya Koslov looks worried, he is looking out his window curtain at something. He starts imagining things, he thinks he sees a blue car – but none is there.

Red and Dembe are with Liz, Red tells her that the girl was just accepted to college, she had all her life ahead of there – they were there and shot the robber. Red says they killed the robber but not the people responsible.

Liz is with the team, she tells them that Fine Caliber Arms International is a hundred-year-old gun manufacturer run by Gordon Kemp. The gun with no collectible value, and easily accessible. Red has put Kemp on the blacklist because he keeps flooding the market with these guns. Ressler and Parker go to meet up with the man who sold the gun to Martel. Ressler asks him where he gets his guns from, he says he can’t do it as he looks over at the girl he is with.

Ilya calls Red, he tells him that there is a car outside his home for an hour and he is worried, it could be others, it could be her. Dembe asks Red what is wrong, Red says Ilya is having another episode, he sees a blue Chevy again.

The girlfriend of the guy who sold the gun to Martel bought 30 at a gun show in West Virginia, the booth held by Judson Firearms. She told them she was starting a personal collection, and she gave all thirty of them to her boyfriend to sell. He sold them on the street. Red tells Cooper that he wants him to go after Judsen Firearms, not the girl. Cooper says it will be hard, her young age isn’t enough. Now, if they sold to her again, another 30, then they would have a case.

Ilya is losing it, he keeps thinking back to when he was tortured by Katarina. Ilya head someone in his house, it is Dembe, but he thinks it is Katarina and attacks him. Dembe manages to take control and Ilya realizes it is him. Ilya tells Dembe that he saw Katarina and the blue Chevy.

At the fun show, Gordon Kemp is there to try to do damage control. The gun seller’s girlfriend is at the show and she is trying to buy another 30. Gordon overhears and tells his sales employee that if she passes the credit check, sell them to her. Ressler tries to arrest Kemp, who decides to be loud on purpose and draw a crowd, Liz and Ressler arrest him and take him out of there.

At headquarters, Liz and Ressler interview Kemp, they tell him that they have him on video that he was going to sell 30 guns to a 24-year-old girl. He says he makes guns, he doesn’t get to choose how they use them. Kemp tells them that every time there is a shooting business ramp up for him and he just ordered six thousand more. Cooper walks in and tells them it is over, Kemp’s lawyer called. Kemp tells them that it is a great country.

Red visits Ilya, his wife pleads with him and tells him that his husband is not well since he returned. Red agrees with his wife, Ilya needs help. Red sits down, he tells Ilya he is sorry forever dragging him into this.

Red and Dembe leave, and what does Red see the blue Chevy.

Cooper is at a meeting, Kemp’s lawyer is there, and so is a judge. They argue the case of Kemp selling the thirty guns to a young girl. Cooper loses it, he says he understands why he was called in here now, so it didn’t get to court and gets swept under the carpet. Cooper is warned. The judge throws out the case, Cooper asks to address the court, the judge refuses.

Cooper tells Red about the case getting thrown out and the law says that Kemp can ship those guns. And, he warns Red not to stop it. Red asks if he is going to send him to his room, then thanks Cooper for the idea. Once Red hangs up the phone, he puts the plan in motion. Meanwhile, Cooper and Ressler go to Kemp’s office and try to warn him that someone may try to stop his shipment, but he won’t listen to them. Kemp refuses their help and calls them a waste of tax dollars.

Much to Kemp’s distaste, the FBI is helping him anyway. Dembe is looking at the task force through binoculars and giving him detail about their plan. Red calls Liz, he tells her that he needs to know which truck has the goods, for the woman who lost her only child that was about to go to college. He begs her to let him get those guns, she doesn’t say, then he guesses that it is her. Liz tells Aram who is watching the vehicle that there is smoke ahead of them. The driver stops, there is an accident, it is a trap. They open the back of the truck, it was the wrong convoy. Cooper set Liz up. Ressler was driving the truck with the guns.

Liz goes to see Cooper, she tells him that he lied to her. She is upset that he didn’t trust her, he says she betrayed them, he did the right thing. He thought she might tell Red and he couldn’t take that chance. He said he just delivered six thousand guns to a man who has no moral compass, it is a terrible day, and it will be worse if they can’t forgive each other.

Ilya and his wife are leaving. Red tells them it wasn’t Katarina, she is dead. Red tells Ilya to stay safe, he leaves.

All the guns are accounted for, Kemp is happy. He turns around and Red is there, with a gun. Red tells him to have a seat. Red says he has always been a fan of the gun manufacturer, they are the tools of his trade. In the wrong hands, the hands he puts his guns in, ruin lives resulting in tragedy. Kemp recognizes him, calls him Raymond Reddington. Kemp says he is not responsible for any killings.

Red says he objects what he is doing and he doesn’t need any court to agree with him, he just executes sentence. Kemp says please, begging for his life. Red says he heads a little girl say the same thing. Red then says a violet criminal brought one of these guns on the street an hour ago and now he is going to shoot him, tragic. Red shoots him twice.

Red gets a phone call, the woman in the blue Chevy is a private eye hired by Liz to follow Ilya, she doesn’t believe that Red is Ilya and she has been keeping it from him. Red hangs up the phone and makes a toast with Liz, she says to be on the same side. But, are they?