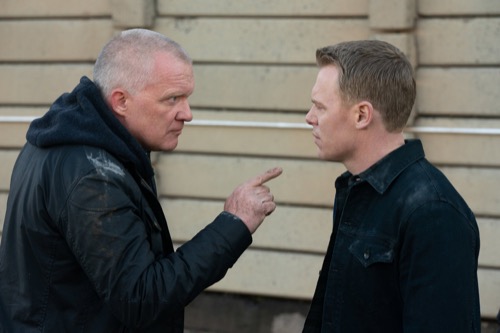 Tonight on NBC their hit drama The Blacklist starring James Spader airs with an all-new Friday, May 1, 2020, episode and we have your The Blacklist recap below. On tonight’s The Blacklist Season 7 episode 17 called, “Brothers”,  as per the NBC synopsis, “Ressler is forced to confront past trauma and family secrets when his brother takes him back home for a risky job.”

Detriot 1995 – we see two men, Tom and Bob with guns chasing another man, they shoot him and one the men also shoots his partner and says to him, “I told you to take the money Bob. The rest of us didn’t, I will look after Lisa and the boys.”

Donald is in the car with his brother, he asks him if he ever thinks about their dad. Donald arrives back home and his mother is happy to see him, the family asks him about the case he is doing, Robby told them about it. Donald is not happy. Donald thinks about when he was younger. Their mother goes to answer the door, Tom is there, her husband’s partner, he tells her that something happened to her husband. The family has a wake at home for Bob, Tom is there, he goes over to the boys and asks them how they are holding up, do they need anything. Tom gives Robby his father’s St. Michael charm and necklace that he wore. Donald is outside sitting in a car drinking, he overhears Tom say, “we gave the guy a chance, nobody wanted this, it’s cleaned up.”

Present-day, Donald goes into a room with his brother who apologizes to him for his mother inviting people over. Robby shows Donald some property where the ground is about to be broke to build a building. Donald tells Robby supplies they are going to need, he goes to buy them. Donald and Robbie pack up the car, two men have eyes on them. They arrive at their destination and find a place where they are going to dig.

Back to when Tom was shot, Donald is sitting on the floor, Robby is there and he says he didn’t mean to do it but he killed their father. Robby asks if anyone saw him come in there, he says no, it’s been about 15 minutes. Robby tells him to go home, wipe off the gun, and pretend this never happened, he will take care of this.

Present-day, the dug up the skeleton. Robby asks Donald if he wishes he didn’t kill him, Donald says no, the scumbag deserved it for killing their father. They put the body in plastic and carry to their car, put it in the trunk. The two men who had eyes on them, still do. Donald apologizes to Robby for being hard on him, he didn’t deserve it. Donald tells Robby that he had his back, he thanks him.

While Donald and Robby are putting some of the stuff in a trash bin, someone drives away with the car. Donald turns to Robby and says please tell me that was random! Robby and Donald are in a bar, Robby says he needed some fast cash and borrowed from a local guy, he is part of the mob. It was 50K, but it is closer to 150k now. He took the car because it was collateral. Donald gets a call from a guy who says he has the car and the cargo in the trunk – Yakov Miko wants the two of them.

Donald and Robby go to see Yakov, he says this is not about money anymore. Yakov says in the FBI, here in Detroit, there is a room called department twelve. It is mostly computers in it, and bring back a file labeled 423. If Donald does that he will give him back the car, everything that is in it, and wipe his debt clean. Donald and Robby leave, Donald hits him in the jaw.

Robby says he doesn’t have to do it, he will take full responsibility. He was the one that buried the body all by himself. When he arrived at the place where he buried him, Tom wasn’t dead, he told Donald that killing his father was business. Robby finished him off and he never told him. Robby says he is going to turn himself in, Donald says no, they are both going to turn themselves in.

Ressler tells Keen everything, she says she will help him, but she wants him to be prepared for when the FBI opens that trunk and sees that body. Ressler says he has been running from this his whole life, he needs this to be done, they both need it to be done.

Donald returns with his brother and gives Yakov file 432. Robby checks the trunk, the body is still in it. Yakov says that he might have a few more projects that he needs help with. The FBI moves in and Keen shoots Rakov, saving Robby’s life.

We go back to Bob’s funeral, Robby is supposed to get up to say a few words about their dad, but Donald does. At the end of the funeral, Robby gives Donald the necklace.

Yakov is in custody, he tells the FBI to check out the trunk of the car. There is nothing there.

Donald is with his brother Robby, he tells him that someone was watching over them, they can finally put this behind them and move on. His mother comes home and she tells him that his father was proud of the two of them because they always stick together. Donald goes upstairs and finds his father’s necklace. Donald is ready to go back to DC, he tells Robby that he will call as often as he can, he gives him their father’s necklace, he tells him it is his turn to hang on to it for a while.

Ressler goes to see Keen, he thanks her, he knows she took the body out of the trunk. She says she did it because she needs him. She says her life is a monsoon of bad news, and he is her tiny island of calm, and if that weren’t there she would be swept out to sea. He hugs her and tells her he is going nowhere.