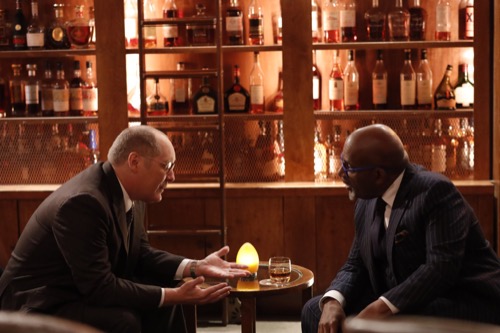 Tonight on NBC their hit drama The Blacklist starring James Spader airs with an all-new Friday, May 8, 2020, episode and we have your The Blacklist recap below. On tonight’s The Blacklist Season 7 episode 18 called, “Roy Cain”,  as per the NBC synopsis, “As the Task Force investigates a kidnapping executed by seemingly impossible abductors, Dembe lands in a perilous situation.

Katarina Rostova has kidnapped Dembe’s Imam, she asks him about his faith. He says his faith requires him to pray for her. She asks if Dembe is faithful, he says he is. She says let’s see if his death shakes Dembe’s faith, then tells him to pray on it.

Red is getting medically checked out, he really isn’t listening. Doctor Maguire
turns to Dembe and tells him to make sure that Red listens to him, his life depends on it.

Red goes to speak to the task force and tells them that Imam was abducted by Arturo Ruel, a man who is in prison. Keen and Ressler go to see the warden of the prison, and tell him that Ruel’s fingerprints were found on Imam’s desk. They talk to Ruel, Ressler tells him to just say who set him up. He gives him the name of his agent, he tells Ressler to find out why the cartel is letting him rot in an American prison, and they he will tell them what they want to know. On the note, Ruel wrote, “want to talk, not here.”

We see two men talk about a woman and a child in a federally guarded safe house, the man wants the woman and child killed, they are witnesses.

Liz is with Red, Ruel is willing to talk. Red tells Liz that he is transferring his assets from him to her, arrangements are to be made, but they will take care of themselves. She says she can’t receive his assets, she is in the FBI, he reminds her that she is also the daughter of Katarina Rostova.

At the prison, the guards caught Ruel’s note to Ressler and Keen, the warden tells the guards to take care of Ruel.

Red goes to see Marvin, he reminds him that the only reason he is walking free is that he sprung him out. He says his wife hit menopause when he was in prison and they wanted children. Red says he is in his debt. He needs information about the prison where he served. Marvin says he cannot help him, he is working in a toy store and he would lose his law license if he talks to him. Marvin tells Red that this man Paul Winn, he is the one guy who gets to decide if he passes the ethics review and gets his license back. Marvin says that if he scratches his back, he will scratch his.

In prison, Ruel gets stabbed. Ressler and Keen are in the prison, she says she wants to speak to the prisoners and find out about who stabbed Ruel.

Red and Dembe meet with Al Roker, he asks him if he remembers Marvin Gerard, Al remembers him.

Dembe gets a call from Katarina Rostova, she tells him to meet in an hour or Imam is dead. And, she says if Red is involved in any way, his Imam will die anyway, even if she gets what she wants.

Ressler and Keen ask prisoners what they know about Ruel, no luck. Keen tells Ressler it is weird that nobody would talk, who are they protecting. Liz tells Ressler that Red wants to hand down his empire to her, she finds it a little weird that he wants to do it now. And she wants to know what the reason is. Ressler tells her that he has seen Red’s medical file, it is the size of a telephone book, so maybe this is for health reasons.

Marvin, Al, Red, and Dembe are talking; Al’s lawyer Paul joins the conversation. Al tells Paul that Red is a dead friend, and Marvin a friend of his. Red tells Paul that Marvin has suffered a great deal of hardship in his life, but his principles remain the same. Al tells Paul to reinstate Marvin or he will take his business elsewhere and his guaranteed contract. Red starts laughing and says that he once lost a bundle to Al for thinking he was bluffing.

Dembe doesn’t tell Red about the meeting, he gets in a car with some of Katarina’s men, they put a black hood over his head.

Marvin is with Red who calls Keen, Marvin says that Ruel was there in person, that is why his fingerprint was on that desk. There is a small number of inmates who got preferential treatment. The leader of this crew is Vincent Martin, he would put inmates in insolation, and they would leave the prison. Martin is the Warden’s, right-hand man. Red tells Keen that Vincent Martin is the guy they should be looking at – he is up to something and it is probably not good. Keen and Park see Martin leave the prison, his shift doesn’t end for hours, they follow him.

Keen goes for a closer look, she sees inmates with enough military equipment to have a war. They are on the move, Keen and Park follow them. Keen and Park go in, she goes the information of her whereabouts to Aram and tells him that whatever is going to happen here is going to happen fast. Aram calls Keen and tells her there is a witness in the building beside them, in a safe house. In the safe house, gunshots are heard. There are armed guards with the witness, the guards get killed, Keen arrives just in time to save the woman and her daughter.

Dembe’s hood is removed, he is with Katarina and she tells him that it is time to see where his loyalties lie. Dembe is permitted to go speak to his Imam. He tells Dembe that he is loyal to two men and he is being asked to choose between the two of them. Either choice carries a burden. Imam tells Dembe he is not to blame, Dembe starts crying and Imam hugs him.

Keen finds out that the warden is the one that puts the men in isolation and takes care of their families if they do things for him.

The prisoners are feeling uneasy, the warden walks in and shoots three of them.

Red has the prison warden, he introduces himself. He tells him that he found a way to monetize the cruelty of men being in prison. He tells Red that he inherited the business from his dad, and his dad before him. He says the prisoners are broken, might as well put them through good use. Red asks him who hired him to abduct Imam. Red demands to know where they took Imam.

Meanwhile, Imam and Dembe are praying. Dembe tells Katarina to release him and he will tell her what she wants to know. Katarina tells Dembe that she is going to record this for the world to see, and she needs an answer, one her men have a gun to Imam’s head. She hears brakes squealing, Katarina runs. Red is there, one man has a gun to Imam, Red shoots the guy in the head and saves him. Red asks Dembe if he told her anything, he says no, but he was going to.

Park goes to arrest the man who hired the warden to kill the witness and her daughter, the warden wrote it in his journal.

Imam tells Red that Dembe had no choice at all.