The Bold and the Beautiful Spoilers: 3 Characters Lives Must Change When New B&B Episodes Return 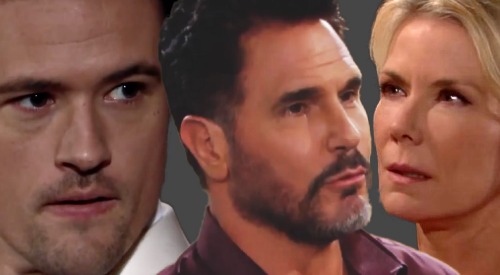 The Bold and the Beautiful spoilers document that a variety of B&B characters need to change their lives. Everyone has the opportunity to do so, but will three people in particular actually do so?

Of course, every character could be called out in one way or another. But focusing on three specific individuals allows some soap to be wiped away from the lens. The people who are about to be referenced have the ability to alter their current course if they want to.

Bold And The Beautiful Spoilers – Brooke Logan Must End Self-Sabotage

Brooke Logan (Katherine Kelly Lang) has a fully earned, storied life resume. A stream of classic episodes has served to remind viewers, or inform newer ones, of her many accomplishments and, to be fair, the havoc that’s been wreaked as well.

To have keep her foot on the pedal where Thomas Forrester (Matthew Atkinson) was concerned was necessary, as he was revealed as a threat to her daughter, Hope Logan (Annika Noelle), to Ridge Forrester (Thorsten Kaye), and to others, most especially Emma Barber (Nia Sioux).

But what happened with Bill Spencer (Don Diamont) was nothing short of self-sabotage.

Lang’s character needs to seek some form of counseling so she can try to understand why the Brill kiss happened. If Brooke asks Ridge to be included in those sessions she might also save her marriage.

Bill worked so hard to win back Katie Logan’s (Heather Tom) trust. Then, in one instant, or rather with one digitally documented and later uploaded smooch, his efforts were shot.

Diamont’s character could make a bold move by stepping back from his power position at Spencer Publications. He could couple that by asking Katie and their son, Will Spencer (Finnegan George), to take an extended trip around the world.

By turning power over to Wyatt Spencer (Darin Brooks), Bill would be putting his heart first. Hopefully Katie would accept the proposal and give Batie one more chance.

The pairing’s love isn’t really in question and their desire to provide a stable home life for Will is sincere. Bill doesn’t deserve another chance, but maybe Katie will give him one.

Bold And The Beautiful Spoilers – Thomas Forrester Can Change Course

It would be useless to offer numerous suggestions to Thomas, regarding how he can change his life. He must recognize the need to be a better human being and then act on it.

Allowing Lope to continue raising Douglas Forrester (Henry Joseph Samiri), without seeking any forced, legal access would send a strong message. Apologizing to Zoe Buckingham (Kiara Barnes) and to Brooke would be two other positive steps.

Thomas has a long way to go before even close family members believe he’s honestly trying to change. But he must take baby steps and then try to walk from there.