The Bold and the Beautiful Spoilers: Ashley Jones Returns as Bridget Forrester – What Brings Bridget Back To L.A.?

BY hellodrdavis on February 15, 2020 | Comments: one comment
Related : Soap Opera, Spoiler, Television, The Bold and the Beautiful 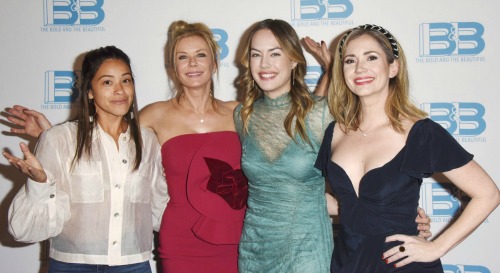 The Bold and the Beautiful (B&B) spoilers has some great news to pass on about the return of a popular B&B star. Ashley Jones, who portrays Dr. Bridget Forrester on the CBS soap, will be returning to canvas in a few weeks. She recently shared with her social media followers that she’s back on set taping, and that’s wonderful news for B&B fans.

Ashley first posted some photos and a video on Instagram to make the announcement. In the first photo, she’s with her young son in the parking area at CBS Studios, and in the video, she talks with her son a bit about where they are, and he cutely says “Las Vegas” as he’s holding some coins.

It’s a sweet video that you can watch below. The third photo is part of the cover of a script, which states that the scheduled air date for the episode she shot will be Monday, March 30th.

In the caption, Ashley states: “Had the best assistant at work today, but he got slightly confused where we were…so I lowered his fee. It backfired, though, cause he thought it was GREAT MONEY! Swipe to see… and v happy to be here!”

Later, in a separate post, Ashley posted a selfie from backstage along with the following caption: “Was a good day being back on #BoldandBeautiful as Bridget. I really missed it here. Xo why do you think Bridget is Back!?”

It didn’t take long for Jennifer Gareis, who portrays Donna Logan, to respond with: “So much fun with you today! Love you baby!!!!” Ashley then replied back: “Love u more.”

Ashley’s fans have been responding to her posts with lots of enthusiasm as well. One said: “Please let this be permanent! The show needs more of you.” And another commented: “Bridget! It’s been so long and there have been so many storylines where my reaction was: where are Bridget and Rick?! Yay!”

This is an exciting development, and we’ll see exactly what brings Bridget back to the show. The last time she was seen on screen was back in 2018 during the holiday season, so it’s been a while. We’re definitely due for some more Bridget on our screens, and fans won’t have to wait too much longer for that to happen.

Are you excited for Dr. Bridget Forrester to return to B&B? Keep watching the CBS soap and make sure you check back with CDL for your latest soap news, recaps, and spoilers.

Had the best assistant at work today, but he got slightly confused where we were… so I lowered his fee It backfired, though, cause he thought it was GREAT MONEY! swipe to see… and v happy to be here! @boldandbeautifulcbs . . #boldandbeautiful #cbsdaytime #bridgetforrester #haydenjhandmommy #ashleyjones

Good day. @BandB_CBS #boldandbeautiful what do you think she’s back for during this visit?? #BridgetIsBack pic.twitter.com/rB5Do3BEys