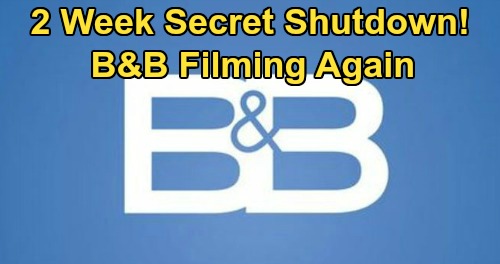 The Bold and the Beautiful (B&B) spoilers tease that the hit CBS show had a brief hiatus of 2 weeks after a staffer from its production company, Bell-Phillip Television, tested positive for COVID-19.

The positive test result occurred three-and-a-half weeks ago, according to Deadline. In response to the positive result, the show took immediate action, taking two “dark” weeks (no production weeks).

Now, normally B&B takes one “dark” week per month anyway, so really the show just added another dark week to the schedule as a precaution. The good news here is that B&B is now back in production and taping, and that the show’s airing schedule doesn’t appear to have been affected by the temporary shutdown.

That means that viewers shouldn’t see any disruption to their televised episodes.

B&B viewers will remember that back when production first picked up again back in June, B&B briefly stopped work due to some false positive results that were detected. After that incident, it seems that the show expanded and improved its testing to avoid false positives down the line.

It may go without saying, but it’s likely the new normal for B&B and every other TV show that goes back in production to have some periodic and temporary shutdowns when someone on the team tests positive for COVID-19.

It seems that B&B had a plan and was responsive when it got that positive result, and that things quickly got resolved and work got back to the “new normal.”

We should also note that earlier today, Television City, which is where B&B and Y&R films, confirmed three positive COVID-19 cases. In a statement, Television City’s owner said that “The three employees are CBS corporate employees who are separated from, and not tied to, any production. No productions have been shut down in connection with this isolated incident.”

So for now, B&B (as well as Y&R) are continuing to produce episodes, which is great news for soap fans. We’ll be sure to keep you up to date on any changes to that status going forward.

Stay tuned to the CBS soap and don’t forget to check CDL often for the latest Bold and the Beautiful spoilers, daily episode recaps, and news.