The Bold and the Beautiful Spoilers: B&B Hottest Couples Revealed – See How Your Favorite Romance Rates 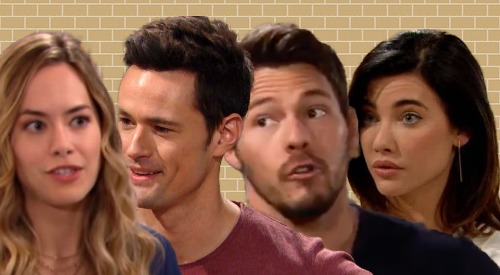 The Bold and the Beautiful (B&B) spoilers tease that relationships are continually growing and dying on the CBS soap. But which couplings have been your favorites over the past couple of years? Here, we run down some of the more recent pairings on B&B, then give you the opportunity to choose your favorite! We’ll limit the options to current or very recent pairings on the show for simplicity.

We’ll start with Liam Spencer (Scott Clifton) and Hope Logan (Annika Noelle). As B&B viewers know, Hope has very recently broken up with Liam after she saw Liam kissing Steffy Forrester (Jacqueline MacInnes Wood) at Steffy’s place. Of course, that was all orchestrated by Thomas Forrester (Matthew Atkinson), with a little help from Steffy, who kissed Liam right as Hope was approaching.

But this recent relationship crisis notwithstanding, Liam and Hope were together for a while, although Hope walked away from their marriage after she and Liam were led to believe that their daughter Beth Spencer (River Davidson and Madeline Valdez) had died. Yet despite going through some terrible times together, including Hope’s short-lived marriage to Thomas, they seemed to be doing ok until Hope decided to adopt Douglas Forrester (Henry Joseph Samiri).

So, “Lope” has had some very difficult times, but they share a child together and we’d say there’s a decent possibility that they could eventually get past Thomas’ manipulations and find a way to work things out. Beth gives them strong motivation to reunite, but we’ll see if it ever happens.

We’re including Liam and Steffy on the list as one of our couples as well, given that Liam seriously waffles between Hope and Steffy on a pretty regular basis. In addition, B&B spoilers indicate that Liam and Steffy will be getting closer in the coming days and will soon share a real kiss after spending some quality time together with their daughter Kelly Spencer (Zoe Pennington).

Well, Wyatt Spencer (Darin Brooks) and Sally Spectra (Courtney Hope) make our list of contenders as well, although they are currently in the process of what will probably be a permanent breakup. “Wally” had some great times, though, and when Sally came back to Los Angeles after her breakup with Thomas, she and Wyatt found each other and quickly became a dynamic, fun couple.

Of course, they experienced a breakup after Sally kept a secret from Wyatt about Thomas’ plan to break up Hope and Liam. Wyatt just couldn’t take Sally’s deception and left her for Flo Fulton (Katrina Bowden), but the two later found their way back to each other and seemed really happy…for a while. Still, there are lots of “Wally” fans out there would would certainly count them as a top B&B couple.

As B&B viewers know, Wyatt is currently on the verge of getting back together with Flo again. It took him quite a bit of time to forgive her for her participation in Reese Buckingham’s (Wayne Brady) baby swap and illegal adoption scam, but he eventually got there, and he realized that he has never stopped loving Flo. The two are high-school sweethearts and they share similar backgrounds and know each other very well, which bodes pretty well for a long-lasting relationship down the road.

B&B viewers haven’t seen much of Bill Spencer (Don Diamont) and Katie Logan (Heather Tom) lately, but by all accounts, they have been enjoying their life together with their son Will Spencer (Finnegan George). They got quite a bit of airtime when Katie had her kidney failure crisis a while back, and viewers got to see just how crushed Bill was when faced with the prospect of losing his beloved Katie.

That said, Bill and Katie had serious trouble in their relationship back when they were married several years ago. Katie batted alcohol dependence and Bill had dalliances with Brooke Forrester (Katherine Kelly Lang), which completely devastated Katie. But “Batie” worked through their issues and found their way back to each other, with a lot of help from Will, who sweetly facilitated their reunion.

Brooke and Ridge Forrester (Thorsten Kaye) have certainly had their share of difficulties lately, and they’ve even signed divorce papers. But to their credit, they haven’t yet filed the papers, as each of them hopes that they’ll be able to work things out somehow. You’ve got to give “Bridge” credit – they don’t give up easily!

These two have weathered numerous storms over the years, and they’re truly a legacy couple. But now they have some serious forces working against them. For one, there’s Thomas, who wants nothing more than to break “Bridge” up due to his vendetta against Brooke.

And now it looks like Quinn Forrester (Rena Sofer) Is going to get in on the action and set out to get her revenge on Brooke, possibly by destroying her marriage to Ridge. It’s going to be a real mess, and we’ll see if Brooke and Ridge can see their way through it.

Even though Thomas would much rather be in a relationship with Hope, he’s currently seeing Zoe Buckingham (Kiara Barnes) in order to prove to Hope that he’s no longer obsessed with her. Of course, Zoe is under the impression that they have a bonafide relationship going on, and who knows – they could end up being a long-term couple down the road. Stranger things have certainly happened!

Finally, there’s Eric Forrester (John McCook) and Quinn. As a couple, they’ve largely been in the background for the past several months. Of course, Quinn’s got a colorful past, but her dark side largely went dormant after her marriage to Eric took place. Eric took quite a bit of heat from his family for choosing to marry Quinn at first, and now things are starting to flare back up, as Brooke is determined to get Eric to divorce Quinn.

But notwithstanding the problems they’re now experiencing thanks to Brooke, “Queric” has been a remarkably stable couple on B&B over the past couple of years. We’ll see if that continues as things heat up between Quinn and Brooke. B&B spoilers say that Quinn will soon give in to her dark side in her battle against Brooke, so we’ll see what Eric ultimately thinks about that.