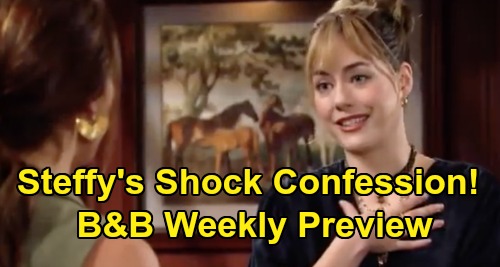 The Bold and the Beautiful (B&B) spoilers for the week of February 3-7 tease that we’ll see some stern warnings and surprising proposals. B&B fans know Quinn Forrester (Rena Sofer) and Brooke Forrester (Katherine Kelly Lang) have declared war, so things are bound to spiral out of control. In fact, Quinn just spiked Brooke’s juice bottle and let this battle take its ugliest turn yet.

Quinn will naturally keep quiet about how far she’s taking this, but Eric Forrester (John McCook) will try to stay optimistic. He’ll hold out hope that the conflict between Brooke and Quinn can be dialed down.

Eric probably isn’t foolish enough to think the tension can be eliminated completely, but he does expect Quinn to make an effort to get along.

Eric will warn Quinn about that in the week ahead, but it should rile her up even more. Quinn may not see why she should make an effort when Brooke’s making no effort at all.

However, Eric may promise that he’ll talk to Brooke again and just try to get them both calmed down. Despite Eric’s positive attitude, he’ll be worried about all this heading downhill fast.

Eric and Ridge Forrester (Thorsten Kaye) will make repeated attempts to curb the friction, but it’ll be tough to establish any kind of peace. Quinn and Brooke hate each other’s guts – and that’s certainly not changing anytime soon!

Of course, Thomas Forrester (Matthew Atkinson) will think Quinn could be a valuable asset. The Bold and the Beautiful spoilers say Thomas will shock Quinn with a pitch soon enough.

Quinn will be taken aback when Thomas lays out his plan to deal with Brooke together. She’ll wonder if Thomas seriously wants to team up with her, so he’ll contend that two’s better than one.

Thomas is equally determined to sink Brooke and push her out of the family, so he won’t see why they shouldn’t join forces. They’ve got the same goal and could reach it faster as a united front. While Quinn mulls over Thomas’ offer, Steffy Forrester (Jacqueline MacInnes Wood) will struggle with more guilt.

Steffy bailed on a recent confession to Liam Spencer (Scott Clifton), but she’ll be tempted to confess to Hope Logan (Annika Noelle) before long. She’ll be stuck on that lip lock with Liam, which wasn’t just a simple kiss.

When Steffy expresses remorse over what went down, Hope will insist she can’t just forget what she saw. She’ll still be in the dark on Thomas’ involvement, so Steffy will state that there’s something Hope needs to know.

Naturally, Thomas may walk in just in time to stop this confession or Steffy may simply decide she can’t come clean after all. Regardless, there’s lots of “Steam” bonding coming up, so it seems Steffy will keep her mouth shut.

I know I’ve been M.I.A but here’s the new promo featuring Hope.