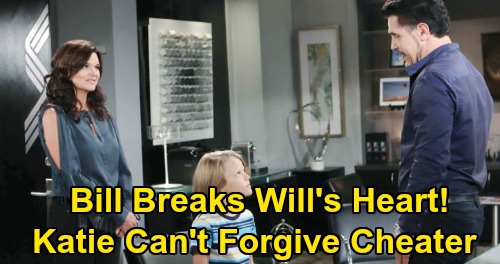 The Bold and the Beautiful (B&B) spoilers tease that Bill Spencer (Don Diamont) may find himself in a desperate fight to save his family. B&B viewers know Bill did some soul-searching and came to the conclusion that he had to focus on what was most important. Bill ultimately decided that was Katie Logan (Heather Tom) and his kids.

As a result, Bill’s spent months trying to prove he’s a better man and stay on the right path. After Katie’s kidney crisis, it became even more of a priority. Bill was a mess when he thought he might lose Katie forever. It would’ve torn Bill’s family apart forever and forced him to say goodbye to someone he cares deeply for.

Unfortunately, all of that may happen in a different way now – and it’s all because of one moment of weakness. The Bold and the Beautiful spoilers say Quinn Forrester (Rena Sofer) will succeed in making her enemy suffer. Quinn loathes Brooke Forrester (Katherine Kelly Lang) and wants to blow up her marriage to Ridge Forrester (Thorsten Kaye) in a big way.

However, that’ll mean blowing up Bill’s relationship with Katie, too. B&B fans can expect Brooke and Ridge’s reunion shindig to end with a bang. Thanks to Quinn, Katie and Ridge will watch that video of Brooke kissing Bill before the party wraps up. The Bold and the Beautiful spoilers say Katie will naturally be devastated and furious.

Ridge will certainly be livid and hurt as well, but things are a little different in his case. At least Ridge and Brooke had been having problems before that kiss went down. There’s also the matter of Ridge and Shauna Fulton’s (Denise Richards) kisses. Brooke didn’t do anything that Ridge hadn’t already done – and their marriage was on shaky ground anyway.

For Katie, this will come completely out of left field. Katie fully believes Bill is committed to her and her alone. This will be a massive betrayal on Bill’s part and on Brooke’s part since she’s Katie’s sister.

The Bold and the Beautiful spoilers say Katie will be blindsided, so she may be upset enough to dump Bill on the spot. If not, there’s a good chance Katie will indeed dump Bill soon after this party disaster.

What happens after that? Since Brooke will undoubtedly try to repair the damage with Ridge, Bill will likely try to do the same thing with Katie. Although Bill’s had Brooke on his mind lately, he still loves Katie and may cling to the hope of keeping their family intact.

Bill’s bound to worry about both Katie and Will Spencer (Finnegan George) once all of this becomes a massive mess. The Bold and the Beautiful spoilers say Bill may go to Katie and pour his heart out.

Bill may tell Katie that she’s the only one he wants, but will Katie really believe that? Katie’s been down this road too many times. It always seems to end with Bill and Brooke reconnecting, so this “Brill” kiss news will serve as more proof.

Bill’s going to have his work cut out for him if he hopes to salvage his relationship with Katie. The Bold and the Beautiful spoilers say Bill may give it his best shot, but “Batie” might crash and burn! Will Bill lose Katie for good? What about poor Will’s reaction to all this?

Bill’s going to feel like a failure as a dad as his family crumbles. Be sure to drop by regularly for B&B updates. CDL will have lots of Bold and the Beautiful spoilers, updates and news posts to catch up on.