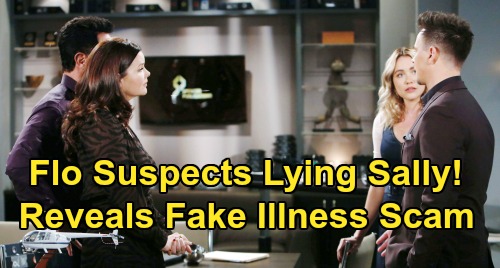 The Bold and the Beautiful (B&B) spoilers tease that Sally Spectra (Courtney Hope) is setting herself up for major trouble. Sally recently told Wyatt Spencer (Darin Brooks) she was dying – seemingly admitting the truth as B&B fans knew it. However, the show threw in a bizarre twist by having Sally acknowledge her scam in private with Dr. Penny Escobar (Monica Ruiz).

So now The Bold and the Beautiful writers are apparently claiming Sally isn’t dying and has been lying to Wyatt this whole time. This plan obviously isn’t going to end well for Sally, which is a shame.

Many B&B viewers love Sally and want to see her find happiness for once. Sally deserves better than using a fake terminal illness to win back a man who hasn’t even treated her right. Wyatt just isn’t worth this!

Of course, Sally’s scheme may work initially. She may slowly reel Wyatt back in, but Flo Fulton (Katrina Bowden) will be a problem in more ways than one. For starters, Wyatt still loves Flo. It’ll be hard for Wyatt to shake those feelings, even if his love for Sally genuinely resurfaces.

However, the biggest problem is Flo’s going to grow suspicious. The Bold and the Beautiful spoilers say Flo will begin to notice some strange things about Sally’s behavior.

Sally’s affection toward Wyatt will be odd somehow, so Flo will find herself fixated on that. It’ll just seem so weird to Flo, who’ll worry that Sally’s motives aren’t quite what they seem to be.

Naturally, there should be other warning signs as this storyline moves forward. The Bold and the Beautiful will inevitably let Flo do some investigating and perhaps uncover the real story.

Flo may be the one to blow up Sally’s secret and derail this crazy plan of hers. B&B definitely seems to be setting up a win for Flo and another loss for Sally. Why does Sally always have to end up heartbroken?!

Many Bold and the Beautiful fans are already annoyed by Saint Flo the hero. The show tries to lay it on too thick and it’s a turn off! If they wanted B&B viewers to root for Flo and Wyatt, this wasn’t the way to make that happen.

Nevertheless, it sounds like Flo will soon be on a mission to uncover the truth and save Wyatt from Sally’s wild plot. Sally should start to get nervous soon, so we’ll see how long she can cover her tracks!

As other updates roll in, there’ll be other B&B news to share. How do you feel about B&B’s latest Sally twist? Be sure to check CDL often for more Bold and the Beautiful spoilers, news and updates.