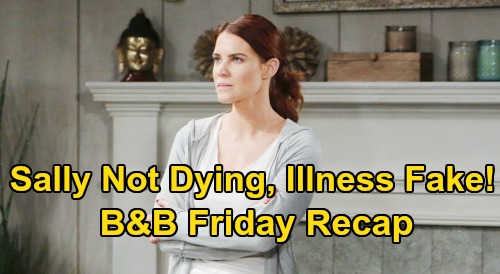 The Bold and the Beautiful spoilers recap for Friday, March 20, reveal that Quinn Forrester (Rena Sofer) sat at the Forrester mansion watching the video of Brooke Forrester (Katherine Kelly Lang) and Bill Spencer (Don Diamont) kissing. Ridge Forrester (Thorsten Kaye) walked in and happily announced that he was there to grab his things since he was moving back in with Brooke.

Quinn asked if he was sure that he wanted to do that, and Ridge blasted her for not being able to see the joy in the situation. Quinn clutched her phone as Ridge said that even Thomas Forrester (Matthew Atkinson) couldn’t interfere in his relationship with Brooke.

Quinn mused that sometimes things happen that are out of one’s control, but Ridge fired back that Brooke was committed to him and loyal.

Quinn found the idea of Brooke being loyal to be amusing, and Ridge wondered why Quinn was holding on to grudges. Quinn quipped, “I guess I am holding onto something.” Ridge said that he didn’t care what Quinn’s deal was – he just wanted to get his things and go. Quinn smiled to herself as he went upstairs.

Meanwhile, at Flo Fulton’s (Katrina Bowden) apartment, she and Shauna Fulton (Denise Richards) made plans to watch TV later that night. Shauna thought that it must be hard for Flo to know that Wyatt Spencer (Darin Brooks) was with Sally Spectra (Courtney Hope). Flo said that she was glad Sally wasn’t alone right now, and that she wasn’t threatened.

Flo and Shauna spoke briefly about Brooke and Ridge as well, with Shauna noting that the two of them were back together. Shauna mentioned that Thomas might not be the only issue in their marriage, and that she wasn’t going to cause problems, but that Brooke might not want the reunion as badly as Ridge does.

Eric was thrilled to hear that “Bridge” were back together. They mused about the digital picture frame that Ridge gave Brooke as a gift, and Eric said he’d put some photos on it later today.

Brooke thanked Eric for being in their corner and supporting them even when Quinn didn’t want him to. Brooke quipped about Quinn’s BFF from the desert, and Eric jokingly said that Brooke sounded like Stephanie Forrester (Susan Flannery). Brooke took that as a compliment. Eric then said that Quinn just wanted what’s best for the family, and that she’s a big supporter of “Bridge.”

Eric went home to the Forrester mansion, where he spoke with Quinn. He mentioned his earlier conversation with Brooke, and Quinn mentioned her earlier interaction with Ridge.

Eric then told Quinn about the digital picture frame, and that he was uploading photos via a link that Ridge gave him. He showed Quinn how anything you upload goes directly to the picture frame. Quinn smiled, and soon uploaded the video to the link.

At Brooke’s place, Ridge arrived and the two canoodled, happy to be back together. Ridge said he was never leaving again, and Brooke said she’d never kick him out again.

They gazed at the digital picture frame, which was set up across the room, as the photo slide show ran continuously. As they distracted themselves by kissing, the video of Brooke and Bill kissing played, but they didn’t notice it.

At Wyatt’s place, Sally quickly realized that Wyatt wasn’t surprised to hear that she was dying. Sally asked if Katie Logan (Heather Tom) had told him, and he said yes, and that he was glad it was out in the open and they didn’t have to pretend. Sally lashed out, saying that Wyatt just felt obligated, and that he felt sorry for her.

Sally was clearly upset and asked about Flo, and Wyatt admitted to exaggerating a bit about him and Flo. Sally reeled, not wanting to be treated as a charity case, and she called Wyatt out on the fact that he only wanted her back because she was dying. Sally said that Wyatt was just going to go back to Flo when she was gone, and Wyatt fired back that it wasn’t a fair characterization.

Sally said that she couldn’t do this – she was done – and she went to leave but stumbled. Wyatt rushed to help her up, and Sally said that she just felt dizzy for a moment but that she’d be fine. Dr. Penny Escobar (Monica Ruiz) piped up about Sally avoiding stress, and Wyatt insisted that Sally wasn’t going anywhere.

Wyatt pled with Sally, saying that he wouldn’t let her go through this alone, and that it was for all the right reasons. Sally asked if he really meant that, and Wyatt urged her to fight and that they could try to beat this thing.

Wyatt left, then Sally jumped up and angrily asked Dr. Escobar what she thought she was doing. Dr. Escobar fired back that Sally was playing games with Wyatt’s feelings, and that she’s not going to put up with this.

Sally then angrily asked Dr. Escobar what she wanted – did she want Sally to tell Wyatt the whole story, that she’s been lying to him this whole time, and that she’s not dying?

That was an eventful episode of B&B, and you’ll want to tune in next week for sure! We’ll be sure to give you updates as more B&B spoilers and news comes in. Remember that CDL is your trusted source for the latest Bold and the Beautiful updates going forward.