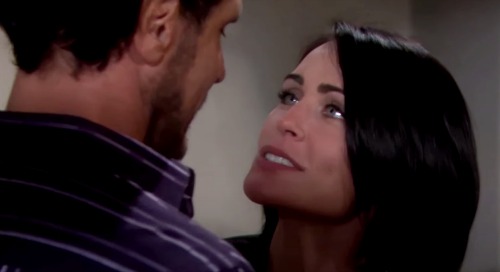 The Bold and the Beautiful spoilers document that Quinn Fuller Forrester (Rena Sofer) is inching closer to being single again. Her hopes of reconciling with Eric Forrester (John McCook) simply don’t look good.

The outrageous marital interference that Quinn engaged in served to make people believe that Ridge Forrester (Thorsten Kaye) opted to divorce the love of his life. But he and Brooke Logan Forrester (Katherine Kelly Lang) remained married, as Quinn’s unforced reveal later confirmed.

It’s not that Quinn betrayed Eric with another man this time. No, that happened a handful of years ago, when she and Ridge allowed themselves to develop mutual crushes.

In this foolish instance, Quinn allowed herself to get so carried away in pursuit of revenge against Brooke that she willfully defied Eric’s request. He told her months ago to lay off Brooke and then reinforced his wishes.

Quinn’s self-exposed efforts leave Eric dismayed and distanced. The gap continues to widen now that he’s told Shauna Fulton (Denise Richards) that he wants her to continue living at the mansion as well. Divorce between Eric and Quinn is an outcome hard to avoid given the deteriorating situation.

Bold And The Beautiful Spoilers – Eric Forrester And Shauna Fulton?

This pairing wasn’t obvious when Richards joined the cast. But now it’s at least plausible.

Eric’s historic appeal to many different woman makes him a realistic option for Shauna. For his part, he seems to take satisfaction in having Quinn recognize that she’s not manipulating him any longer. Plus, the presence of her former best friend sends an extra message to his current wife.

Sheric is a catchy couple’s nickname. Fans will soon learn if this implied connection actually develops, or if Eric is simply displaying his legendary generosity once again.

Quinn was never looking in Bill Spencer’s (Don Diamont) direction. There is literally no love lost between Wyatt Spencer’s (Darin Brooks) parents. However, they clearly shared a spark in the past.

B&B’s choice to link Quinn and Bill would set this version of Los Angeles, California, ablaze. Of course, Bill’s efforts to reconcile with Katie Logan (Heather Tom) would either have failed in order for this to become possible, or Batie would be again damaged by this development.

It’s fair to suggest that the audience would be split by this projection being realized. But Quill’s ride could be compelling depending on how it would be written.