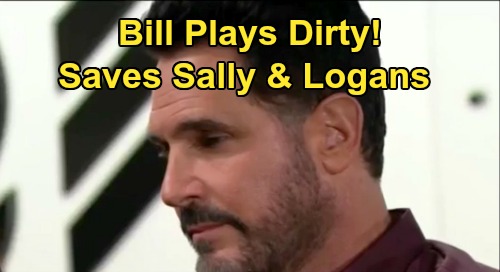 The Bold and the Beautiful (B&B) spoilers tease that several characters will find themselves in need of a hero. Although Bill Spencer’s (Don Diamont) been more of a villain at times, he’s on the straight and narrow these days. Bill’s all about putting his loved ones first, but he can be pushed too far! Sometimes even a hero has to play a little dirty, so Bill may find himself in that position in the coming months.

B&B viewers can expect the war at Forrester Creations to spiral out of control, which will lead to Bill’s involvement. As Thomas Forrester (Matthew Atkinson) tries to push the Logans aside, Bill will take a stand against what he views as injustice.

He’ll probably suspect Brooke Logan (Katherine Kelly Lang) is being specifically targeted as well, so Thomas and Quinn Forrester (Rena Sofer) will have to watch their backs.

Bill will be a rebel with a cause in a way. He may break some rules as some hot plots heat up, but he’ll have good motives. Sometimes a reformed baddie is the only person who can take down those on the dark side.

Bill’s got a dangerous mind, so he’s the perfect person to tackle Quinn and Thomas. Just because Bill’s fighting his worst impulses doesn’t mean he’s some innocent angel now.

Bill may wind up being a hero to Brooke, Katie Logan (Heather Tom) and Donna Logan (Jennifer Gareis), but they won’t be the only ones affected by his efforts.

If Bill manages to take Thomas down, it could save Hope Logan (Annika Noelle) from falling for his manipulation again. She’d be grateful for any updates on twisted moves she doesn’t know about.

You might even argue that Bill could save Quinn from herself! He’d be Quinn’s hero if he stopped her from destroying her marriage to Eric Forrester (John McCook), even if she wouldn’t admit it. It’s all a matter of timing and when Bill can successfully intervene

However, Bill’s heroics could head into life-saving territory. Sally Spectra (Courtney Hope) is battling a fatal illness and could really use some help. The Bold and the Beautiful fans know Bill can afford the best treatments and specialists that money can buy.

If Bill finds some secret trial spot, he might magically open the door with his millions and become Sally’s hero as well as Wyatt Spencer’s (Darin Brooks). Bottom line, The Bold and the Beautiful spoilers say Bill’s going to be in hero for a while, even if he has to play dirty to pull it off!

We’ll keep you posted as other news surfaces on “Dollar Bill” and what’s next for the character. Keep watching B&B and as always, check out CDL often for the latest Bold and the Beautiful updates and all the hottest news.