The Bold and the Beautiful Spoilers: Bill’s Surprising Advice for Wyatt – Dad Picks Flo, Says Son Will Get Over Sally

BY Heather Hughes on January 26, 2020 | Comments: one comment
Related : Soap Opera, Spoiler, Television, The Bold and the Beautiful 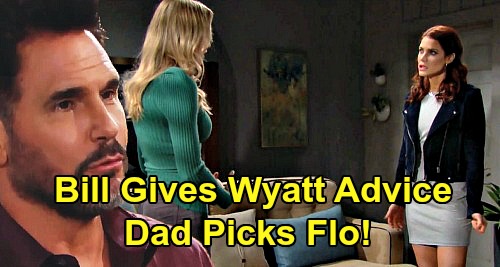 The Bold and the Beautiful (B&B) spoilers tease that Bill Spencer (Don Diamont) will have some advice for his son. B&B fans know Wyatt Spencer’s (Darin Brooks) in a tight spot at the moment – and he happens to be on fans’ bad side over it.

Wyatt hasn’t treated Sally Spencer (Courtney Hope) right, so it’s been disheartening to see him follow in Liam Spencer’s (Scott Clifton) waffling footsteps. However, Wyatt can’t help the way he feels. Sally would be better off moving on with a man who truly loves her than one who’s just settling for her.

Wyatt’s fallen back in love with “Flo” Fulton (Katrina Bowden), but he hates how much pain he’s caused Sally. He’ll have all this on his mind as he tells his troubles to “Dollar Bill” on an upcoming episode.

The Bold and the Beautiful spoilers say Wyatt will share his concerns as well as his guilt. He’ll feel like his decision to break up with Sally is really tearing him apart. Wyatt won’t realize that Sally’s also facing a difficult diagnosis.

Sally will shut Wyatt out when it comes to that, so he’ll just believe he broke Sally’s heart one too many times. Wyatt will genuinely worry that Sally’s falling apart.

Even so, part of Wyatt will be excited about the prospect of a future with Flo. She’s his high school sweetheart and the one who got away. Wyatt and Flo have been portrayed as some destined couple, even if many viewers aren’t really on board.

After Wyatt gets honest with Bill, he’ll get some empathy and guidance. Bill knows what it’s like to love more than one woman.

Bill’s bounced around from Katie Logan (Heather Tom) to Brooke Forrester (Katherine Kelly Lang) to Steffy Forrester (Jacqueline MacInnes Wood) and then bounced some more. Perhaps that waffling is an inherited Spencer trait!

Nevertheless, Bill ultimately reunited with Katie, who’s home to him now. He’s all about his family and feels he’s found his way back to the woman he’s meant for. Bill should understand why Wyatt wanted to get back together with Flo and has never been very fond of Sally anyway.

The Bold and the Beautiful spoilers say Bill will basically tell Wyatt that it is what it is, so he should just accept the situation and move on with Flo in his life.

Bill will offer some words of encouragement as Wyatt struggles. He’ll let his son know that everything’s going to work out in the end. Bill will get that this all seems bleak to Wyatt right now, but he’ll think Wyatt can get over it along with Sally.

Breakups happen and people go their separate ways. It’s just part of life. Wyatt should appreciate is dad’s wisdom and may take Bill’s advice to heart.

Unfortunately, Sally’s suspicious behavior could cause a setback in Wyatt’s attempt to press on. He’ll be determined to find out what’s up – and he should be even more heartbroken for Sally once he finds out what it is.