The Bold and the Beautiful Spoilers: Brooke & Bill’s Kiss Mystery Watcher – See Who It Was & What Will They Do Next?

BY hellodrdavis on March 10, 2020 | Comments: 2 comments
Related : Soap Opera, Spoiler, Television, The Bold and the Beautiful 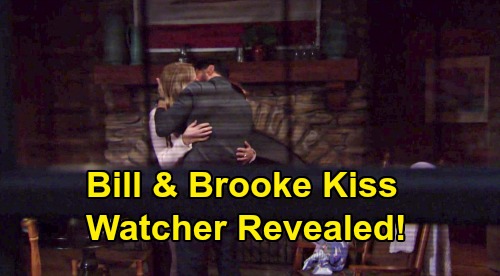 The Bold and the Beautiful (B&B) spoilers tease that Brooke Forrester (Katherine Kelly Lang) and Bill Spencer (Don Diamont) have a big secret to keep. As B&B viewers know, they shared a steamy kiss in Hope Logan’s (Annika Noelle) cabin recently. Bill was saying how he would always be there to protect Brooke and Hope from Thomas Forrester (Matthew Atkinson) when things took a passionate turn. And it wasn’t just a small kiss, either, it was a real, full-on kiss that looked pretty serious.

In fact, Bill and Brooke got so caught up in their lip lock that they didn’t notice that they weren’t alone. As B&B viewers saw, someone was watching their kiss from outside the cabin. This is huge, since Bill and Brooke subsequently vowed to keep their indiscretion a secret from everyone. They know that if Katie Logan (Heather Tom) or Ridge Forrester (Thorsten Kaye) find out about the kiss, then both of their relationships could go up in smoke.

And that might be a reality, depending on who saw their kiss. Interestingly, given what other characters were doing on the show at the same time as the kiss, it doesn’t seem possible that the person was Thomas or Quinn Forrester (Rena Sofer), both of whom seem to have the most vested interest in knowing that Brooke kissed someone other than Ridge. Yet each of them was present at the Forrester mansion when Bill and Brooke’s kiss was taking place.

In addition, Shauna Fulton (Denise Richards), Ridge, Eric Forrester (John McCook), Steffy Forrester (Jacqueline MacInnes Wood), Hope, Zoe Buckingham (Kiara Barnes), and Liam Spencer (Scott Clifton) were also busy at other locations during the kiss, so it couldn’t have been any of them who spied the kiss, either.

So, who’s left who would have plausibly been present at Brooke’s estate and who would have actually come down to the cabin to look for Brooke or Hope? Well, one distinct possibility is that it was one of Brooke’s sisters. That would mean that it could have been either Katie or Donna Logan (Jennifer Gareis) who spied the kiss.

Of course, had it been Katie, she probably would have barged right in and been very upset by the scene, so it’s probably unlikely that it was her. But Donna remains a possibility. Then there’s the possibility that it was Bridget Forrester (Ashley Jones), who is due back on the B&B scene this month, although from all accounts she’s scheduled to reappear more toward the end of March than at the present time.

We should note, too, that B&B spoilers indicate that Quinn may well find out about the kiss, since she’ll soon get what she needs to take Brooke down. Quinn finding out about the kiss would be a major score for her, since she could use that information to not only humiliate Brooke but also to completely ruin any chance that Brooke has of reuniting happily with Ridge.

But if Quinn is going to stumble upon intel about Bill and Brooke’s kiss, then she’ll need to get it from the person who actually spied the kiss, or even overhear a conversation between Brooke and the person who spied the kiss. For example, if Donna saw the kiss, then had a conversation with Brooke about it that Quinn overheard, that would do the trick.

We’ll see what happens here, but it’s clear that someone saw the kiss, and now it seems that at least Brooke (and perhaps Bill as well) will have to deal with the aftermath of it. Who do you think saw Brooke and Bill kissing in the cabin? Stick with B&B and be sure to consult CDL often for the latest Bold and the Beautiful spoilers, news, and updates.