The Bold and the Beautiful Spoilers: Wednesday, March 11 – Thomas Marriage Surprise All Set – Steffy & Brooke Try To Talk Zoe Out of Wedding

BY hellodrdavis on March 10, 2020 | Comments: 2 comments
Related : Soap Opera, Spoiler, Television, The Bold and the Beautiful 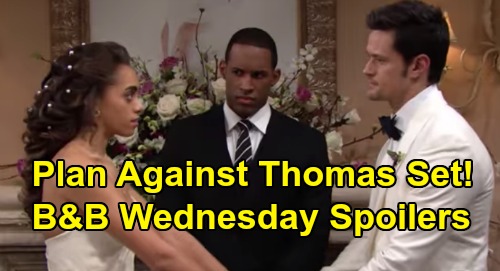 The Bold and the Beautiful spoilers for Wednesday, March 11, tease that it will be the wedding day of Zoe Buckingham (Kiara Barnes) and Thomas Forrester (Matthew Atkinson), and there will be a lot of anticipation for the event itself, as well as for the surprises planned for the wedding.

As B&B viewers know, Hope Logan (Annika Noelle), Liam Spencer (Scott Clifton), and Steffy Forrester (Jacqueline MacInnes Wood) have decided to “out” Thomas for the conniving manipulator that he is, and they’re planning on doing this during the wedding itself. Viewers didn’t get to hear any more of the plan than this, so we’ll likely have to watch the action as it unfolds, but suffice it to say that Thomas is going to be quite surprised by the turn of events.

But first, it appears that the plan will involve trying to spare Zoe any public embarrassment resulting from anything that will be planned for the wedding. According to B&B spoilers, both Steffy and Brooke Forrester (Katherine Kelly Lang) will do their best to get Zoe to open her eyes and see that Thomas is manipulating her as part of a larger plan to get Hope for himself.

Whether Steffy and Brooke talk to Zoe collectively or separately remains to be seen, but it certainly seems that Zoe is going to get an earful from them both on her wedding day. Of course, Brooke still has deep feelings of animosity toward Zoe for her role in keeping Beth Spencer (River Davidson and Madeline Valdez) from Hope and Liam for all those months, yet she’ll still try to get Zoe to see the light.

And Steffy will be feeling terribly for Zoe, since she now knows that Thomas has completely snowed her into thinking that he loves her, when all he really wants is to use her to force Douglas Forrester (Henry Joseph Samiri) into getting Hope to marry him. However, despite both Brooke and Steffy’s appeals, it looks like Zoe will be completely unwavering in her belief in Thomas, and she’ll insist that she’s marrying him and becoming a Forrester.

Meanwhile, guests will start to arrive for the wedding. Ridge Forrester (Thorsten Kaye) will be thrilled, given that Thomas’ marriage to Zoe means a lot to him. It not only means that his son is reformed and has moved on from his obsession with Hope, but it also means that he’ll be able to get back together with Brooke. Look for Ridge to be as happy as a clam as the wedding guests arrive and things kick off.

And of course, Thomas will be sure to work on Douglas some more. As they sit looking handsome in their respective tuxes, Thomas will urge his son to convince Hope to change her mind about marrying him. He’ll likely tell Douglas again that if he doesn’t come through and convince Hope to marry him, then he’ll be stuck with Zoe as a stepmom. Thomas knows how to push Douglas’ buttons.

Soon, Hope and Liam will arrive at the wedding, likely separately, as they won’t want anyone to know that they’ve gotten engaged again. They’ll want to keep that a secret, so they’ll pretend to be still estranged for everyone’s benefit – after all, they’ve got a big plot to carry out. And since B&B spoilers indicate that Hope will be wearing that Hope For The Future showstopper gown before the wedding is over, it looks like Hope will end interrupting the wedding in a major way.

Exactly how it will go down remains to be seen, but B&B spoilers indicate that Douglas will have a meltdown during the wedding ceremony and run out of the room, prompting Hope to chase after him. It looks like when she returns to the ceremony, she’ll have the showstopper gown on that Thomas designed and she’ll likely tell Thomas that she wants to marry him.

This could be Hope, Liam, and Steffy’s big plot. After all, they said that they wanted to shine a big spotlight on Thomas, and if Hope somehow forces him to admit that he’s been in love with her all along – all through his relationship and engagement to Zoe – then they’ll have him right where they want him. Hope could then say she was just kidding, and that she just wanted to lure him into a public confession.

That would definitely be a way to put Thomas and his plans in the spotlight! Unfortunately, if that’s the plan, then some people are going to get hurt pretty badly. Zoe will be devastated, and so will Ridge. But Hope, Steffy, and Liam will apparently feel that this is the only way to expose Thomas and get Zoe and Ridge to really see what Thomas has been up to all along.

At any rate, as the wedding festivities kick off on Wednesday’s episode, B&B viewers can expect Hope, Liam, and Steffy’s plan to be quietly set into motion. It will take a couple of episodes for all of this to unfold, but if it unfolds as we suspect that it will, it should all culminate to an exciting conclusion.

Wednesday’s episode sounds pretty riveting, so be sure to stay tuned! We will update you as more Bold and the Beautiful news comes in. Keep watching the CBS soap and check CDL often for the latest B&B spoilers, updates, and news.