BY hellodrdavis on May 20, 2020 | Comments: Leave Comments
Related : Hot News, Soap Opera, Spoiler, Television, The Bold and the Beautiful 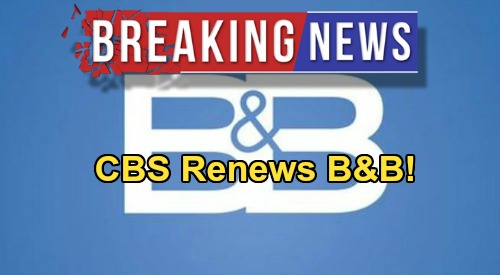 The Bold and the Beautiful (B&B) spoilers has some fantastic news to pass on about the future of the popular CBS soap. The network announced on Wednesday afternoon that the show has been renewed for another two seasons. B&B’s Twitter feed proudly announced: “The next two years just got even more #BoldandBeautiful! B&B has officially been renewed for two more seasons.”

That means that viewers will continue to see all the drama surrounding the Forresters, Logans, and Spencers through the 2021-2022 broadcast season. While fans are patiently waiting for the show to come back after the coronavirus shutdown has lifted, they can rest assured that the wonderful conflicts, confrontations, love triangles, and angst will continue on for the next couple of years.

Bradley Bell, the show’s Executive Producer, said, “I am thrilled to dive into years 34 and 35 of The Bold and the Beautiful. We are grateful to Amy Reisenbach [Executive Vice President, Current Programs, CBS Entertainment] and everyone at CBS for their incredible commitment to the series. Of course, many thanks to our loyal fans who motivate us every day with their unending passion and enthusiasm.”

Amy Reisenbach put out a statement as well, saying, “For over three decades, the Bold and the Beautiful has been a cornerstone of the CBS Daytime lineup. The show has been a creative and ratings success due to the supremely talented cast, writers, and producers that Brad Bell has assembled.”

Amy continued, praising the fans: “Of course, none of this would have been possible without B&B’s dedicated fans, whose passion for these characters and stories is unsurpassed. We are delighted to be able to continue to offer them a daily look into the romances and rivalries between the Forrester, Logan, and Spencer families.”

With respect to when new episodes of B&B will start being produced again, we have a terrific news update! B&B fans should note that California’s governor Gavin Newsom has promised new guidelines within the next few days for reopening various industries in the state, which include TV production, some of which could open up as soon as next week.

However, Governor Newsom has also said that Los Angeles County, which is where B&B films, will not be among the first places in the state to open. Still, the governor’s plan is progress, so perhaps we’ll get a clearer picture soon of exactly when filming for the show can resume.

At any rate, fans will be anxiously awaiting their new episodes of B&B, and it’s great news to know that the show will continue on through at least the 2021-2022 broadcast season! Stay tuned to B&B and be sure to keep CDL bookmarked for the latest Bold and the Beautiful news and updates. We’ve got you covered!